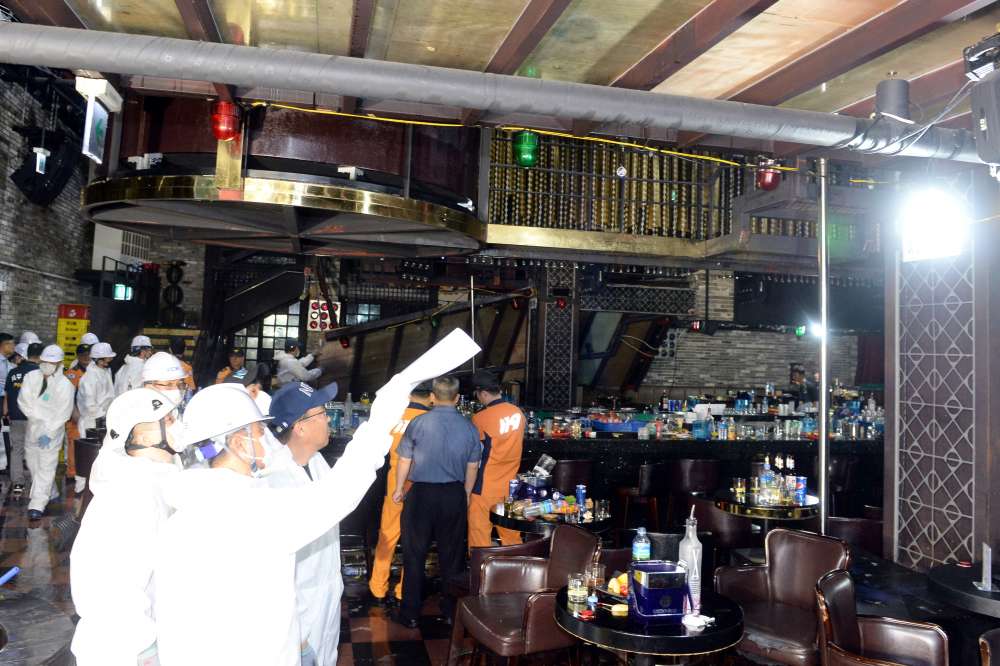 The upper deck of a nightclub collapsed on top of revellers in South Korea on Saturday, killing two people and injuring several foreign athletes competing at the World Aquatics Championships, rescue officials and witnesses said.

The floor gave way in the Coyote Ugly nightclub in the city of Gwangju at about 2:30 a.m. (1730 GMT Friday), pinning people underneath and injuring at least 10, rescue officials said.

New Zealand men’s water polo team captain Matt Small said he was on the second-floor deck when it collapsed.

“We were just dancing and then the next minute we dropped,” he told New Zealand’s Radio Sport.

“We … fell on top of the heads of other people that were beneath us … Some of them were pretty dire cases,” he said of the injured.

Kim Young-don, chief of the Gwangju Seobu Fire Station, told a briefing there were about 370 people in the club at the time.

“We deem that the second level … seems to have collapsed because there were too many people on it,” he said. “The second level is a small space, it’s not a space where a lot of people can be.”

Gwangju, about 330 km (205 miles) south of the capital Seoul, has been hosting the championships, which feature swimming, water polo and diving, over the past fortnight. The meet finishes on Sunday.

Organisers said eight foreign athletes were injured, with seven sustaining minor injuries and one remaining in hospital for treatment of a leg laceration.

Three of the injured athletes were from the United States, two from New Zealand and one each from Italy, the Netherlands and Brazil, South Korea’s Yonhap news agency reported.

All but the Brazilian were water polo players, it said.

A Gwangju police officer told Reuters two co-owners and two workers at the nightclub were being questioned about possible illegal expansion and renovation at the nightclub, and the legality of its licensing.

The women’s water polo tournament wrapped up on Friday with the United States beating Spain in the final and Australia beating Hungary in the bronze medal match.

“Players from our men’s and women’s teams were celebrating the women’s world championship victory when the collapse occurred,” Ramsey said.

“Our hearts go out to the victims of the crash and their families.”

Water Polo Australia said some of its players were in the club but were not hurt. Women’s team captain Rowie Webster said she was one of those who fell from the second floor.

“It was quite scary,” she said.

Organisers FINA said it “deeply regrets the situation and sends its best wishes to any victims of this accident”.

“FINA is carefully monitoring the situation and will activate all measures to ensure health care and assistance is provided whenever necessary,” it said in a statement.

Public safety has been a hot button issue in South Korea after the 2014 sinking of the Sewol ferry, which killed 304 people, most of them school children.

The administration of President Moon Jae-in has made the establishment of a national system for accident prevention and disaster management a priority. But there have been several major incidents since Moon came to power.

By In Cyprus
Previous articleLarnaca: Woman injured after gas explosion in apartment
Next articleFinMin warns against foreclosures amendments as Government and banks sign “Estia” scheme