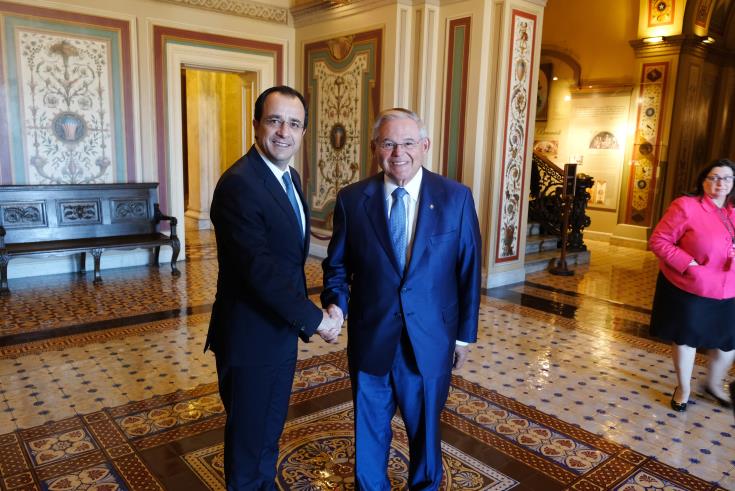 Cyprus’ Minister of Foreign Affairs Nikos Christodoulides concluded his three-day visit to Washington having discussed matters such as the arms embargo against Cyprus implemented by the US since 1987, security and energy matters and the Cyprus problem in meetings with Senator Bob Menendez and Under Secretary of State for Political Affairs David Hale, with Menendez expressing the view that “we are getting ever closer” to lifting the arms embargo.

In statements after the meeting Menendez, who serves as Ranking Member of the Senate Foreign Relations Committee said that “we are really enthused about the role Cyprus is continuously taking in exercising leadership in the region.”

“We are very optimistic about the exploration that is going on and the ability of Cyprus to play a major role in terms of energy and energy security, not just for the region, but potentially for Europe,” he noted, adding that “we applaud that and we want to make sure that it is secured and be able to happen.”

Menendez continued expressing the view that “the Cypriot government has a lot of roles to play in the regional cooperation and in Eastern Mediterranean strategy and we hope memorialize some of that in legislation.” But, he added, “I hope it would be bipartisan legislation in the very near future.”

“I have always had a view of lifting the arms embargo. I think we are getting ever closer and to the credit of the Cypriot government they have taken a series of actions that I think makes that move possible,” he said.

On his part in statements after the meeting the Cypriot Foreign Minister said “on the part of the legislative power there is a clear intention in the immediate future to take specific actions, which will allow further enhancing relations between the United States and the Republic of Cyprus but also in general through the recognition of the role of the Republic in the Eastern Mediterranean.”

Speaking during a panel discussion at the AIPAC (American Israeli Political Action Committee) Policy Conference on Monday executive director of HALC Endy Zemenides had announced that this week, Senator Bob Menendez and Congressman Ted Deutch will introduce “a very aggressive piece of legislation on the Eastern Mediterranean that is very pro-Israel, pro-Greece and pro-Cyprus.”

In the meantime, a State Department press release says that Under Secretary Hale met with Christodoulides “to discuss the recent progress in the U.S. – Republic of Cyprus security relationship.”

It adds that “they reaffirmed commitment to strengthen cooperation across a range of shared interests, including in combatting terrorism, countering malign influence, enhancing maritime and border security, and promoting peace, stability, security, and prosperity in the Eastern Mediterranean region.”

The Under Secretary, the press release notes, “reaffirmed the longstanding US policy on resources in the Republic of Cyprus’ Exclusive Economic Zone. He also reaffirmed U.S. support for the Cypriot-led, UN-facilitated efforts to reunify the island as a bizonal, bicommunal federation, which would benefit all Cypriots.”

Energy giant ExxonMobil and Cyprus government announced at the end of February 2019 a discovery of a natural gas resource of approximately 5 to 8 trillion cubic feet in Cyprus’ offshore block 10, at the Glaucus-1 well. In late 2011, Noble Energy had announced estimated gross mean resources of 5 tcf for the Aphrodite gas field.