Close cooperation will have positive results, President says after meeting with Greek Premier 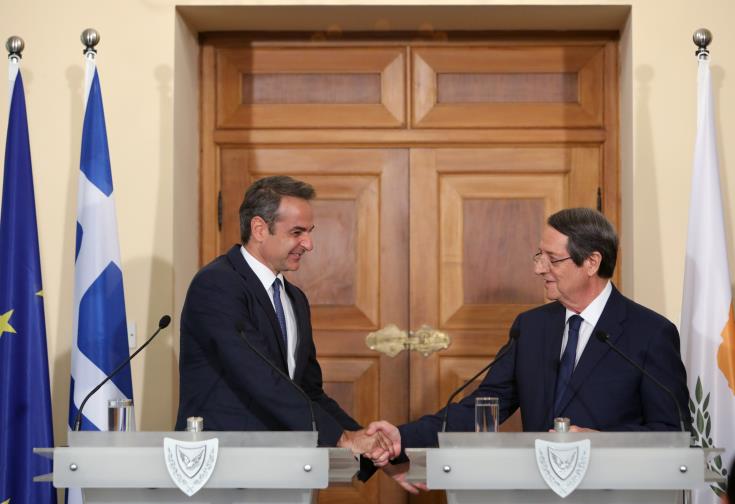 President Nicos Anastasiades has said that close cooperation with Greece will have the corresponding positive results, expressing the government’s absolute satisfaction over the Greek Prime Minister Kyriakos Mitsotakis’ official visit to Cyprus.

President Anastasiades was replying to journalists’ questions as he was departing from the Presidential Palace were he held a meeting earlier with the Greek Premier and consultations were held between the two countries delegations.

Asked whether the government is satisfied from the Greek Prime Minister’s visit he replied “we are absolutely satisfied and I believe that close cooperation will have the corresponding positive results.”

Replying to a question as to whether he is ready for his informal meeting on August 9 with Turkish Cypriot leader Mustafa Akinci he said that we will prepare appropriately, adding that “I am certainly ready. I am always ready as long as both sides have the necessary determination and political will.”

Asked whether a meeting in September in New York expected to take place between the two leaders and UN Secretary General Antonio Guterres is expected to prepare the ground for a new informal conference, President Anastasiades replied that one “should not be in a hurry” before what is desirable happens.

The President, who is recuperating from surgery following a fall, was asked whether he has put behind him the most difficult period of his convalescence. He replied positively, adding that  he still has some exercise and physiotherapy to undergo in order to return to his previous state. “The surgery was very successful,” he noted, adding that it also seems that due to his “good genes” he suffers no osteoporosis nor osteoarthritis. “Everything is running smoothly,” he said.