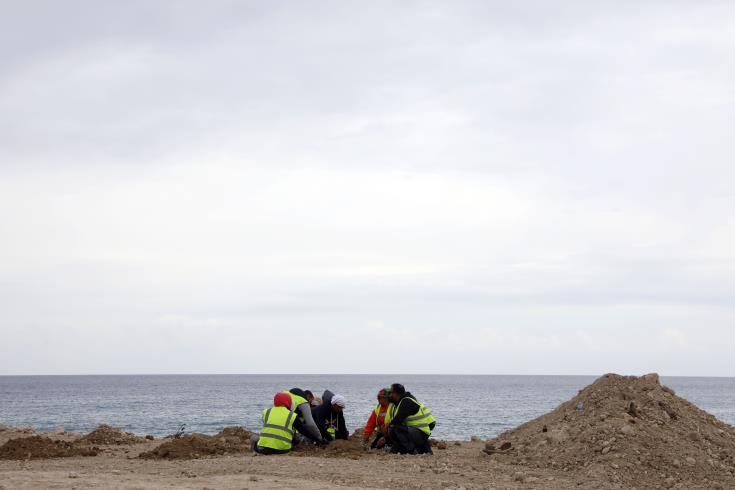 The issue of the missing people in Cyprus is an open wound. Decades after the 1963-1964 incidents and the 1974 Turkish invasion, the fate of hundreds of persons, civilians included, from both communities, Greek Cypriots and Turkish Cypriots, who went missing, still remains unknown.

Cyprus News Agency has visited excavations sites for missing people a few times in the past and has talked to officials from the Committee on Missing Persons (CMP) and the appeal was always the same: time is running out, witnesses and informants who are still alive must come forward and give information.

Apart from the lack of information which leads to a decline of the number of excavations and exhumations of remains, the rapid construction is also a factor that makes things difficult.

On Monday we were able to visit two sites of excavations in occupied Lapithos, on the northern coast of Cyprus and in Strovolos, in Nicosia district.

The decline in the results of excavations that are taking place, especially the past couple of years, cannot but affect the archeologists on the field.

“For us, archaeologists working in excavations and exhumations for remains of missing persons, it really does not matter if the missing we are looking for are Greek Cypriots or Turkish Cypriots, soldiers or civilians, it is important to help heal the wounds of families of these people, our families, every day is stressful for us, every process without results disappoints us” one of the archaeologists working at the site in Lapithos, near the archeological site of ancient Lambousa, told CNA.

The day was grey and cloudy, rather melancholic, with drizzle and with lots of dust in the atmosphere. But we came across many people who were taking their morning stroll, jogging alone or with company, many with their dogs, down the wide pedestrian street built right by the water.

The presence of diggers and archaeologists with vests and special hats is quite a normal picture nowadays. It does not bother the residents as much as the very first years when CMP began its project excavations and exhumations. Those years many villagers or people who were passing by these areas would stop, out of curiosity to ask or they would share information that sometimes was helpful.

“Now they know who we are and what we actually do, but you know the villagers are talking to each other, they are exchanging views and information and yes, if they have information that might help us we call on them to share it with us,” says Rousana Theocles, chief archaeologist of the excavation in occupied Lapithos.

A team of twelve people has been working in the area since mid-February. Usually the teams consist of four people, two Greek Cypriots and two Turkish Cypriots but in this particular site the team was supported with more crew members due to the nature of the site and the works need to be done.

The site in Lapithos was excavated in 2014. The excavation revealed the remains of ten people which were identified and given to their families. No complete skeletons were found, but bone fractures. CMP has information from Greek Cypriot and Turkish Cypriot sources that twenty or more Greek Cypriot soldiers went missing in the area.

“The bones located in this second phase of excavations are on the surface of the ground, in piles of soil from the area, from a construction of a nearby hotel. Unfortunately, we do not have specific information of the burial site, or if there was a burial site. What we have is just a general information that more than twenty Greek Cypriot soldiers went missing here. Our aim is to test all the piles of soil to see if we can locate bones in there and also to check if there are any graves underneath,” Rousana Theocles said.

She explained that because the bones were in piles of soil, the work at this stage is done manually, a process which is time-consuming, because the piles must first be checked by hand by the archaeologists. Also, due to the heavy rainfall in the area, some bones might have been washed away.

“There are also archaeological findings here, tombs and bones of ancient Lambousa, and perhaps the bones we find are from that period, something that the DNA analysis will show us”, she said.

Archaeologist Andreas Christou also spoke to us about the difficulties they are faced with. He said that because the piles of soil were transported here, the methodology applied is the actual checking of the soil by hand with small tools. Then the trenching method will be applied until the archaeologists are sure that everything was checked properly and there is no possibility that other bones will be located.

“This work done by hand is indeed quite time consuming, because every grain of soil must be examined in detail and diligently. The fractures of bones are so small and we need to make sure that everything was checked”, Christou says.

We met Andreas last year, during excavations in occupied Kyrenia and Gerolakkos. The appeal on his behalf, the same: “Time is running up, we needed the information yesterday, witnesses tend to forget, some have passed away , so again we call on everyone who has information to share it,” Christou says.

Yiannakis Philippou, another archeologist, has been working with the CMP for the past nine years. He hopes that there will be results during this second phase of excavations on the site.  He explains that because the site is huge, because the bones have been found on the surface but also because of the ancient site in the area, a special plan has been drawn for this excavation.

“The area around here is an ancient site, the ancient site of Lambousa, an important archaeological site, so it is quite realistic that some of the bones we find could be of the archaeological era, but this will be confirmed by the analysis done at the lab,” he said.

Philippou is a member of the Maronite community and says it is very important that all communities in Cyprus are present in this huge effort to locate bones of the missing people in Cyprus. “Some of us have missing relatives, so you can understand the emotions and the pain, this project of the missing is our project and each case is ours,” he says.

Christiana Zenonos is the Greek Cypriot Coordinator of Excavations at CMP. Together with the Turkish Cypriot deputy coordinator Gulseren Baranhan, they accompanied us to our visits to Lapithos and Strovolos.

She says that the remains of at least two people were identified so far and explains that because of the fact that bones were located and identified during the 2014 excavations, it is quite possible that more bones will now be located.
“These bones found now might be related to the bones found in 2014. There is a possibility they don’t. This is why we have prioritized our work in order to analyze these bones and have results the soonest,” she said. Zinonos said that it is encouraging that the first bones in 2014 were identified because this indicates that other bones are lying somewhere around. “We basically follow our findings, these findings are the ones which guide us,”  she noted.

We leave behind Lapithos and in less than an hour we are in Strovolos, in Nicosia district near Apolloneion private hospital.

It is believed that most of the Turkish Cypriots who went missing in the 1963-64 incidents and during the 1974 invasion, were lost in the Strovolos area, except the 80 Turkish Cypriots who were lost in Tochni village and whose remains were found in two areas in Yerasa and Pareklissia. The excavation and exhumation in Yerasa were one of the first major works carried out by CMP the period 2006-2007.

Archaeologist Yannis Ioannou explains that in the area, two more excavations took place the past three months without any results. The excavations were done in adjacent plots of land, near the site we visited.

The information received by sources is there might be a burial site in the area. The works began three weeks ago at the specific plot which used to be a car sales garage, right in the residential area.

“The information we have is for four or five Turkish Cypriots from the ’63-’64 period. We are looking for a burial site that was probably excavated back then with the use of some kind of excavator, in other words a pit was made and we are now trying to find this pit”, he said.

According to Ioannou, the process involves the opening of trenches as in any case where the information that was received speaks of a burial site. “When we find something, the process with the excavator will stop and we will start working by hand to set the boundaries and see if we can identify how many people were buried there. Then the procedure is to exhumate the remains,” he explains.

He also pleads for information as the lack of it and the passage of time, slows down the whole process.

“We go to all the excavations sites with the hope that we will locate something. We do not go somewhere knowing in advance that we will have no results. But yes, the fewer the results are, the harder it is for us as well. We could only hope that this year we will have more results,” he said.

In Strovolos, we also met Turkish Cypriot archeologist Mete Tosun. He wanted to ask us about our experience. We told him that we are trying as press to raise awareness about the issue of the missing. “Helping us is important, these families are in pain and the pain is the same for everyone”, he said.

Excavations are currently being carried out in five locations across Cyprus. A team of 12 archeologists is working in Lapithos, one in Yerani, one in Templos, one in Strovolos and one in Epichos, Mesaoria where there is information for one Greek Cypriot missing person.

Human remains were located in Yerani whereas in Templos analysis will show if the remains are from the ancient era or belong to missing.

In all cases there is cooperation with the land registry which provides the CMP with aerial pictures which are compared with old ones for more accurate excavations.

By In Cyprus
Previous articleMarch inflation up to 1.1% in Cyprus
Next articleCyprus registers €0.7 billion trade deficit in first two months of 2019