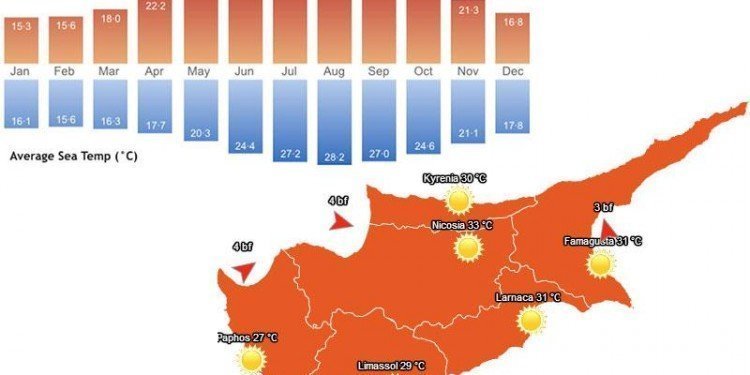 Climate
Cyprus enjoys an intense Mediterranean climate, with long dry summers from mid–May to mid–October, and mild winters from December to February, which are separated by short autumn and spring seasons.

Summer is a season of high temperatures with cloudless skies, but the sea breeze creates a pleasant atmosphere in the coastal areas. Isolated thunder showers are possible mainly over the mountains during early afternoons.

Winters are mild with rain and snow on Troodos Mountains (usually starting before Christmas).

Sea Temperatures
The temperature in the open sea hovers above 22° C from June to November, climbing to 27° C in August. Even during the three coolest months of January to March, average sea temperature are an acceptable 16° or 17° C. Near the coast, the temperature of water three or four metres deep is similar to that of the open sea, ranging from 15° to 17°C in February and from 23° to 28° C in August. There are no significant daily fluctuations in sea water temperatures, except in very shallow waters less than one metre deep.

Air Humidity
During the days in winter – and at night throughout the year – humidity ranges from average to slightly low (65% – 95%). During summer it is very low near midday, ranging from 15% to 30% on the central plain. Fog is rare and typically occurs in early morning.

Winds
Winds over the island are relatively variable in direction and strength, depending on the elevation of the land and local temperatures.

Weather Forecast
You can access weather forecasts for the island through various sources:
Radio: Weather Forecasts in English are broadcast every day from the Cyprus Broadcasting Corporation’s ‘Programme Two’ on FM 91-1MHZ.
Television: The weather forecast follows the news bulletin in English every day on Channel 2 (CyBC TV2) and Channel 1 (CyBC TV1).
Newspapers: The weather forecast is published daily in the ‘Cyprus Mail’, the island’s only daily English newspaper.
Meteorological Service Website: www.moa.gov.cy

Clothing and Activities
General information and suggestions on what to wear and do, according to the season, are provided below.

April-May
Days are pleasantly warm during this period, but can get a slightly chilly at nights. This is an excellent season for those who prefer to enjoy nature, as the countryside is green and flowers are in bloom.
The clothing advised is:
– Medium-weight and summer apparel.
– Light woollies or long-sleeved cotton for the evenings.

June-July-August
The warmest months of summer that are Ideal for swimming and all beach/water activities.
The clothing advised is:
Very lightweight summer clothing.

November
This month has pleasantly warm days and cool evenings. Lunch in the open–air can still be enjoyed, and even sunbathing and swimming can too, along with most outdoor sports. The weather is ideal for autumn travel.
The clothing advised is:
– Medium-weight apparel.
– Light Woollies.

December-January
These are the winter months for Cypriots, but can be considered as autumn by foreign visitors. It may rain occasionally, yet the promise of glorious sunshine is still there. Outdoor activities and excursions can still be enjoyed.
The clothing advised is:
Winter clothing, but heavy coats are not required.

February
The weather is changeable, with the possibility of warm days and occasional rain. Whilst temperatures are the harbingers of spring, it can be quite cold in the evenings. Almond trees are in bloom and conditions are ideal for snow skiing on the Troodos mountain range.
The clothing advised is:
Winter apparel.

March
The weather is moderate, with plenty of sunshine and nature at its best. Most outdoor activities can be enjoyed, and March is an excellent period for long country walks.
The clothing advised is:
Winter apparel with medium–weight wear.

By In Cyprus
Previous articleCypriot lawyer guilty of human trafficking
Next articleLimassol Oncology Centre: the deal is sealed