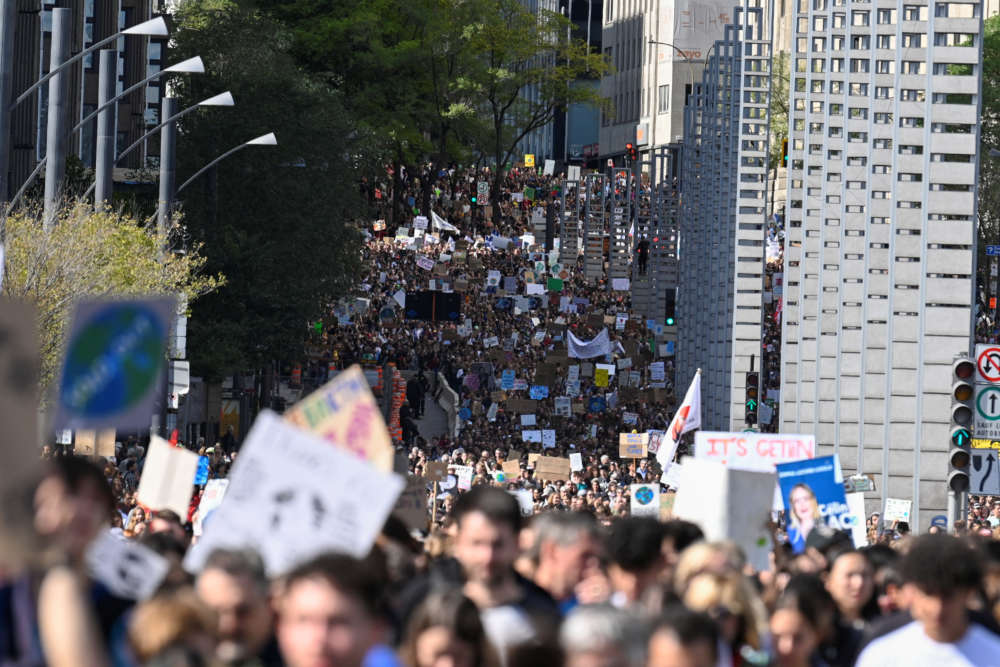 Teenage activist Greta Thunberg hit back at critics including U.S. President Donald Trump on Friday, saying their mockery of children shows her message has become “too loud to handle”.

“Today we are millions around the world, striking and marching again, and we will keep on doing it until they listen,” Thurnberg told a crowd that organizers estimated to be about half a million people in the Canadian city.

“I guess they must feel like their world view or their interests or whatever… is threatened by us. We’ve become too loud for people to handle so they try to silence us,” she told reporters before the rally. “We should also take that as a compliment.”

On Friday, the climate strikes she inspired started in Asia and continued in Europe after similar strikes a week earlier. Tens of thousands of students kicked things off in New Zealand.

About 500 students in the South Korean capital, Seoul, urged more government action to address climate change, marching towards the presidential Blue House after a downtown rally, where they said the government gets an “F” in climate action.

Thousands of Dutch children also skipped school to join a global climate strike on Friday, blocking traffic and asking their leaders “how dare you?” in a reference to Thunberg’s speech at the United Nations.

Matthew McMillan, 22, a mechanical engineering student at Montreal’s Concordia University, held a “Make America Greta Again” poster as he joined other students at the protest.

“I think it is the most important event of our generation,” he said.

Thunberg’s presence in Canada coincides with campaigning ahead of an Oct. 21 federal election. She met with Prime Minister Justin Trudeau privately for about 15 minutes in his capacity as a leader of the government not the Liberal Party.

Later she was asked what her message to Trudeau had been.

“He is of course obviously not doing enough but… this is such a huge problem,” she said. “My message to all the politicians is the same, to just listen to the science, act on the science.”

Trudeau is promising more climate action but has also had to defend his decision to buy and expand a major oil pipeline in western Canada.

“You are the problem! Climate criminal!” shouted a man who police hauled away from one of Trudeau’s campaign stops. As the prime minister joined the Montreal march, police tackled another man who lunged at him to throw eggs.

Video showed Trudeau consoling his son, who appeared to be frightened and was crying after the incident.

Of his meeting with Thunberg, Trudeau said he had a “wonderful conversation with Greta” and that they “talked directly about the need to do more, much more”.

United Nations aviation leaders are in Montreal on Friday attending a meeting of the International Civil Aviation Organization (ICAO), which is debating ways to minimize the sector’s impact on climate.

Commercial flying accounts for 2.5% of carbon emissions, but passenger numbers are forecast to double by 2037, so experts say emissions will rise if more is not done.

ICAO expressed “enthusiasm and support” for the march on Thursday, adding that “more action and faster innovation are now required to address aviation’s near- and long-term impacts”.