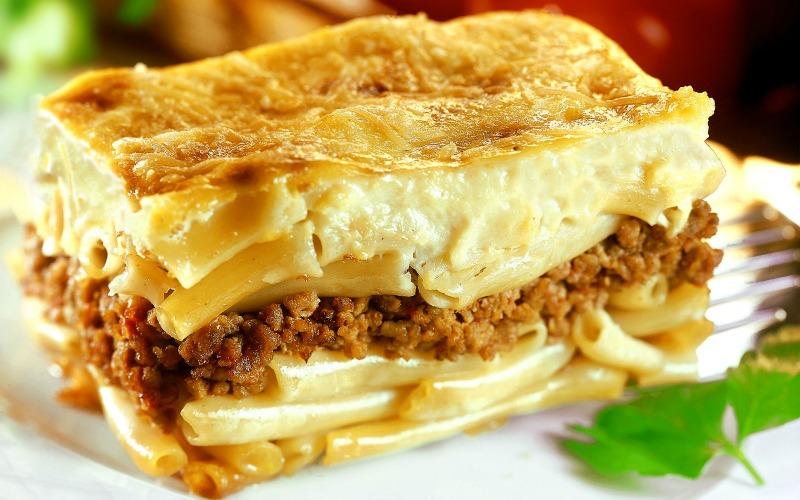 Prepare the mince sauce: heat the butter in a pan and sauté the mince with the onion and garlic until nicely browned, mixing well. Add all the other ingredients except the egg whites. Season to taste. Let the sauce simmer at medium heat for about 15 minutes until it has reduced, then remove from the heat. Allow it to cool, then mix in the egg whites.
For the béchamel, melt the butter in a small saucepan until it froths. Then mix in the flour until it starts to brown. Remove from the heat and beat in the milk, a little at a time. Season with salt, pepper and nutmeg and return to the heat, continuing to stir until it reaches a boil and thickens.
Add the egg and yolks, stirring all the time, as well as the grated cheese, and then remove from the heat. Preheat the oven to 180°C.
Meanwhile, boil the macaroni in lots of salted water until soft, then drain. Return it to the pan and mix in the butter and half the cheese. Grease a large oven-proof dish with butter and place the macaroni in it. Cover with sauce and then béchamel. Sprinkle with remaining grated cheese and oregano and bake for about 1 hour until golden on top. Let it rest for at least 15 minutes before serving.

By In Cyprus
Previous articlePaphos hotels offer free accommodation to health professionals
Next articleCovid-19: A round-up of the latest developments in Cyprus