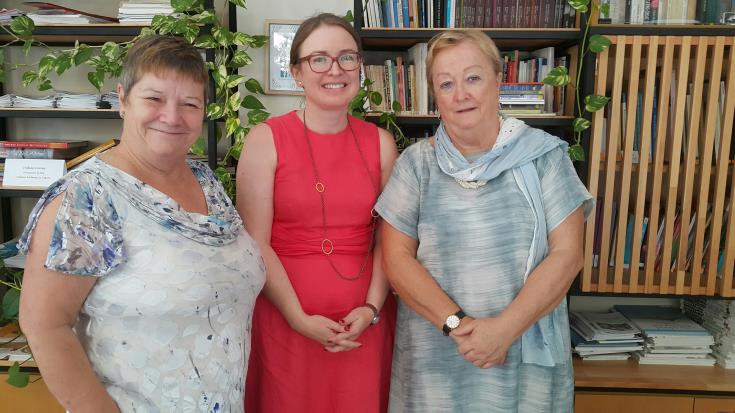 Peace starts with small things, and unless civil society, the institutions and political leaders are involved, peace will not be sustainable, two women activists, involved in the Northern Ireland peace process, have told CNA.

They also said that work needs to be done during the hard and the good times, pointing out at the same time that a peace process cannot remain exclusive to those who have been involved over the years.

The two women, signatories to the 1998 Good Friday Agreement, who have visited Cyprus recently, highlighted the role of the international community in a peace process.

“Peace processes do not go in one direction, there are not like railway lines, they are a roller coaster,” they said.

Monica McWilliams is a Commissioner on the Independent Reporting Commission for the disbandment of paramilitary organisations and remains involved in the implementation of the peace agreement on the Bill of Rights for Northern Ireland and reconciliation issues. She has recently completed a large scale study on what difference peace makes to women’s lives in Northern Ireland.

Avila Kilmurray has 20 years experience in community philanthropy that supported community based work with women’s groups and supporting victims of the Troubles and the reintegration of political ex-prisoners. She is currently working as a consultant with The Social Change Initiative, an international NGO working to strengthen civil society activism and advocacy in the areas of Human Rights, Migration and Refugee Rights and community based peacebuilding.

Asked about their overall feeling from their contacts in Cyprus, on both sides of the divide, McWilliams talked about “incredible despondency” and “intransigence” which have set in in relation to the latest UN-led attempt in Crans-Montana to find a negotiated settlement, in July last year.

“We are accustomed to that in Northern Ireland over the years, because sometimes you reach an agreement, and then it goes down, it is a roller coaster. But you cannot afford to let lethargy be the dominant value of your work, we have to work through the hard and the good times, especially in a vacuum,” she noted.

A process, she said, cannot remain exclusive to those who have been involved over the years, and stressed the need to implement any confidence building measures that are agreed on.

Move quickly, she said, and keep moving in the right direction as one cannot go back.

In Ireland, she explained, there was involvement of London and Dublin, who came together to the table and started working together in partnership. Nonetheless, she said, the international community is very important.

Kilmurray talked about “a major intergenerational gap” in that older people run the risk of losing memories of having lived together and younger people have to deal with the way history and national narrative is being taught in school.

“We found in Northern Ireland the importance of story telling and giving an all history and sharing perceptions is really important because it humanised the issue and in protracted conflict the space for dialogue is narrowed,” she added.

She referred to obstacles which institutions “quite often” raise in terms of the necessary dialogue and when invited to qualify this, she talked about a Cyprus map in her hotel where the northern Turkish occupied part of the island is blank.

“In Northern Ireland we had the EU doing cross border initiatives, economic initiatives, encouraging people to go from Belfast to Dublin, from Cork to Derry to find out about people’s perspectives. All these little things lay the root for the harder political things,” she explained further.

McWilliams, on this point, referred to the need in Northern Ireland to change the churches, who were divided, the obligation of trade unions to protect the rights of all workers irrespective of religion or origin and the active engagement of the business leaders in a peace process.

“Peace starts with small things. From small things bigger things eventually were built and in the end we were serious players at the table,” she explained.

Invited to identify changes in Cyprus since their last visit here, 15 years ago, McWilliams said now feelings have burnt out, only few women attend meetings, hopes were dashed and women’s voices have been silences.

“Our peace process was a roller coaster, one step forward, two steps back. Peace processes do not go in one direction, they are not like railway lines,” Kilmurray said.

“When all the oxygen is on the leaders, then it is very hard to get other voices in, but when things are not going so well, there is perhaps more space, civil society has to step in and women have to organize,” she told CNA.

Civil society should not wait for permission to act, one must take the first step and even if it ends in disaster, people have to try something else, she urged Cypriots.

“If you wait around for permission, you are going nowhere,” she cautioned, stressing that “at the end of the day, it is your process, you have to be prepared to take the risk.”

McWilliams called on those people in position of responsibility to open up some windows and let women in and their voices heard.

Replying to a question about the validity of all such efforts, without a political agreement, both women were adamant that without grassroots engagement an agreement will collapse.

“The political agreement will come to nothing if those grassroots are not built on, the agreement will not be comprehensive, 50% of those agreements break down within 5 years. The sustainable ones are those that have civil society, the institutions, political leaders working together or in partnership,” they told CNA.

During their visit, they went to the Turkish occupied town of Famagusta, met civil society representatives, women from NGOs, students, academics, women political parties representatives, the 12 women ambassadors here, UN officials and others.