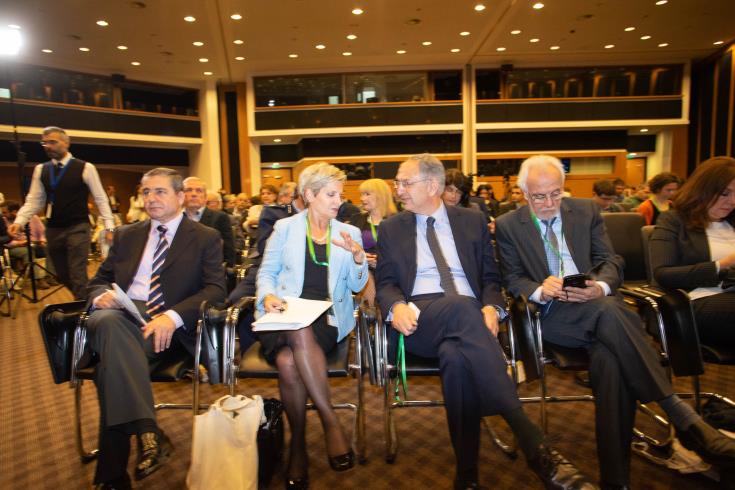 The challenges for Cyprus and other countries in their transition towards a circular economy model, as well as ways to promote sustainable mobility were highlighted by officials addressing two conferences, that started in Nicosia on Thursday morning.

Addressing the opening of the conference titled “Challenges for the Islands in the era of the Circular Economy – CirClE 2019” and the “6th Sustainable Mobility & Intelligent Transport – SMile 2019” conference, Minister of Agriculture Costas Kadis said that the goal is to reduce by 2035 the total quantities of municipal waste going to landfills to 10% of the total quantities produced.

“Our primary goal is the continuous development of our country in a sustainable manner, so that medium and long term benefits are maximized” noted Vassiliki Anastassiadou, the Minister of Transport.

From his part, Nicosia Mayor Constantinos Yiorkadjis said that public transport is the only way forward, adding that “time is running out and we need to act now.”

Outlining his Ministry’s priorities, Kadis said that the focus is on waste minimization and management to reduce waste generation, increase sorting at source, waste reuse and recycling and significantly reduce the amount of waste that reaches the landfill.

Kadis said finally that his Ministry is currently revising the national municipal waste management strategy and the waste prevention program.

Addressing the opening of the conference, Anastassiadou said that “this event negotiates a number of topics which affect the daily lives of citizens in almost every country of the world” and referred to issues such as air quality, the optimal management of water resources and waste, recycling in remote areas and islands and ways to generate clean energy.

She said moreover that the conference focuses on ways to reduce dependence on vehicles and fossil fuel consumption through the use of technology, on efforts to stimulate sustainable economic growth, on sustainable tourism and smart cities.

The Ministry of Transport is an active proponent of sustainable mobility, Anastassiadou went on, and referred to a number of mobility projects to develop public transport, design and implement infrastructure for pedestrians and cyclists and explore the feasibility and sustainability of rail connection between cities and tramways within cities.

The Minister of Transport also spoke about an “holistic approach in promoting the development and implementation of sustainable urban mobility plans for each city, as well as developing a strategic transport plan for the whole island.”

The Mayor of Nicosia Constantinos Yiorkadjis said that “public transport is the only way forward if we want to achieve our EU commitments relating to the reduction of harmful emissions.”

“We know what the problem is with regards to environment pollution and traffic jams and we have the solution. We only need the necessary political will to implement them” the Mayor went on.

He added that in order to do that “we must first change within, we must change the old perceptions that currently exist in many important and key government agencies relating to transport and road design.”

“Currently too little is being done, too slowly. At this pace Cyprus probably will not be able to successfully deliver on its promises to the EU relating to emission reduction” he noted.

According to Yiorkadjis “time is running out and we need to act now.”

George Kremlis, President of the Organizing Committee CirClE 2019 and Honorary Director in the European Commission referred to the cases of Cyprus and Malta, and said that we need to join forces with the two island states and all other islands of the Mediterranean, to highlight the challenges of circular economy.

“We need a special strategy for the islands connected to insularity and circular economy”, Kremlis went on, adding that such a strategy exists only for the outermost regions, such as the islands of the Pacific, of France, Spain and Portugal.

No such strategy for the islands of the Mediterranean exists, he observed and underlined the opportunities to ensure more funds for the islands during the next programming period.

In his address, the Rector of the University of Cyprus Tassos Christofides noted his expectation that the country will become a model for environmental sustainability and people will make the right use of public transport.

We envisage a future with sustainable transportation options, road safety and a society that will finally embrace sustainable mobility and public transport, making our cities more humane, he noted.

The opening of the conference was also addressed by Helmut Morsi from the DG for Mobility and Transport, while Calleja Crespo, the Director General of DG Environment addressed participants via video message.

During the two-day conference, at the Filoxenia Conference Center, in Nicosia, various panels will be held on topics such as sustainable mobility, innovation, climate change and energy. The conference, organised by the Ministry of Transport, under the auspices of the European Commission’s Directorate-General for the Environment and for Mobility and Transport, concludes Friday.