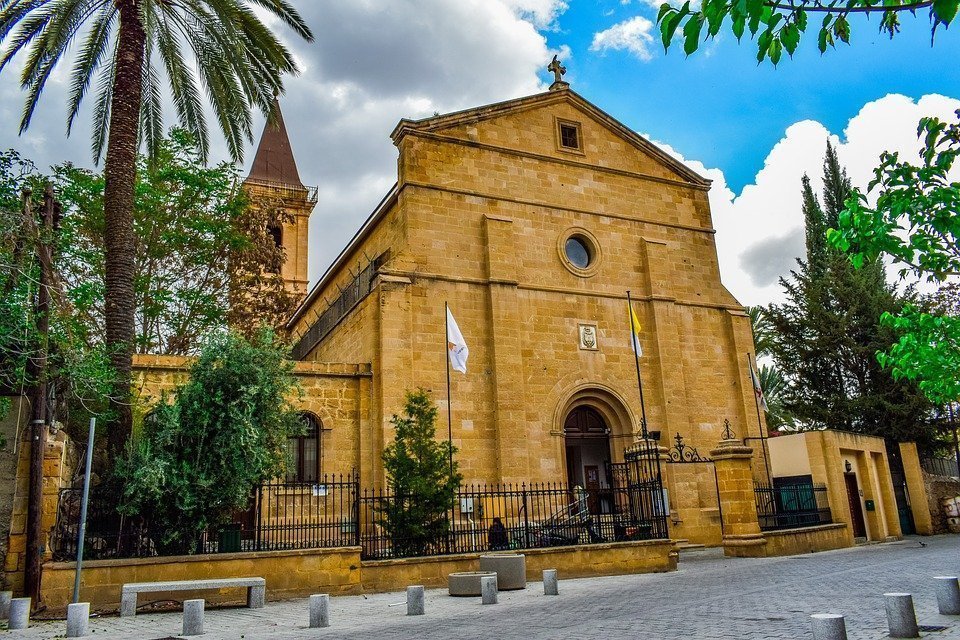 The Church of the Holy Cross is a Roman Catholic parish located in the city of Nicosia in Cyprus.  Location

Its formal inauguration took place in 1902. It also has a friary which was rebuilt in 1959. Part of the access to the garden was blocked as a consequence of the Cyprus crisis of 1963–64 and the war of 1974, as the church sits in the buffer zone between Nicosia and North Nicosia. The parish depends from the Latin Patriarchate of Jerusalem.

The story of the Church

In April 1900, the first stone of the present church was blessed and laid. The expenses for the building were partly shouldered by the Royal Family of Spain and partly raised by the Friars. On February 16th 1902, the church was inaugurated. The Friary beside the church was rebuilt in 1959.

As a consequence of the turbulences of 1963 and the following years, and the war of 1974, the Church and the Friary of the Holy Cross are within the Buffer Zone. Both the main entrance to the Friary and the carriage gate to the garden look on to the Turkish occupied territory and are blocked. For this reason, in 1996, a new, decent entrance and gate were opened and the garden was beautified with flowers, trees and a lawn. A Grotto of Lourdes was built under the trees.

In 1998, from June to November, the whole interior of the Church was restored. The Holy Masses on Sundays were celebrated in the garden during that period. Faithful to the original design and spirit, the restoration work enhances the beauty of the place leading to prayer and meditation. The work was completed with a magnificent stained-glass window, above the altar.

More recently, Holy Cross Church and the other parish buildings were renovated and (being also the Embassy of the Vatican in Cyprus) welcomed Pope Benedict XVI who stayed there during his first official visit to Cyprus, from 4 to 6 June 2010. He also celebrated the Holy Eucharist and preached at Holy Cross on 5 June 2010. 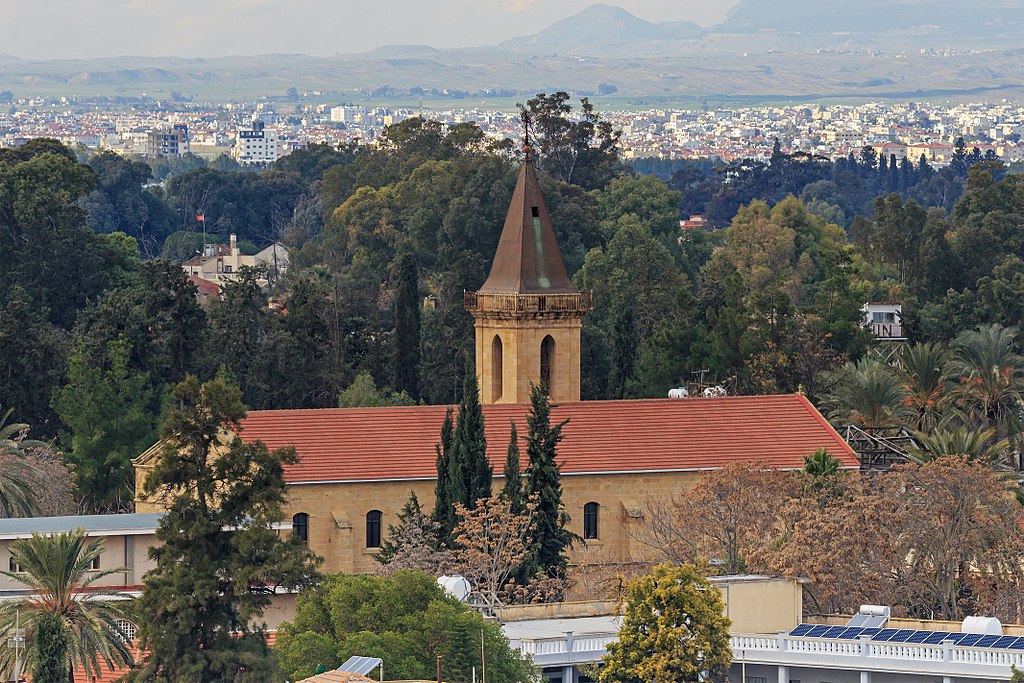 Photo by A.Savin, View from the Shacolas Tower (Wikimedia Commons)

Description of the church

The Church does not belong to a particular style. The façade is simple and elegant. It ends with a tympanum, while at its centre there is a rose-window with the cross of Jerusalem in stained glass. Below the rose window, there is the coat-of-arms of the Custody of the Holy Land.

The Church does not belong to a particular style. The façade is simple and elegant. It ends with a tympanum, while at its centre there is a rose-window with the cross of Jerusalem in stained glass. Below the rose window, there is the coat-of-arms of the Custody of the Holy Land.

1. VESTIBULE. The church entrance leads to a small vestibule, above which there is the old choir gallery. Side doors lead into the church. 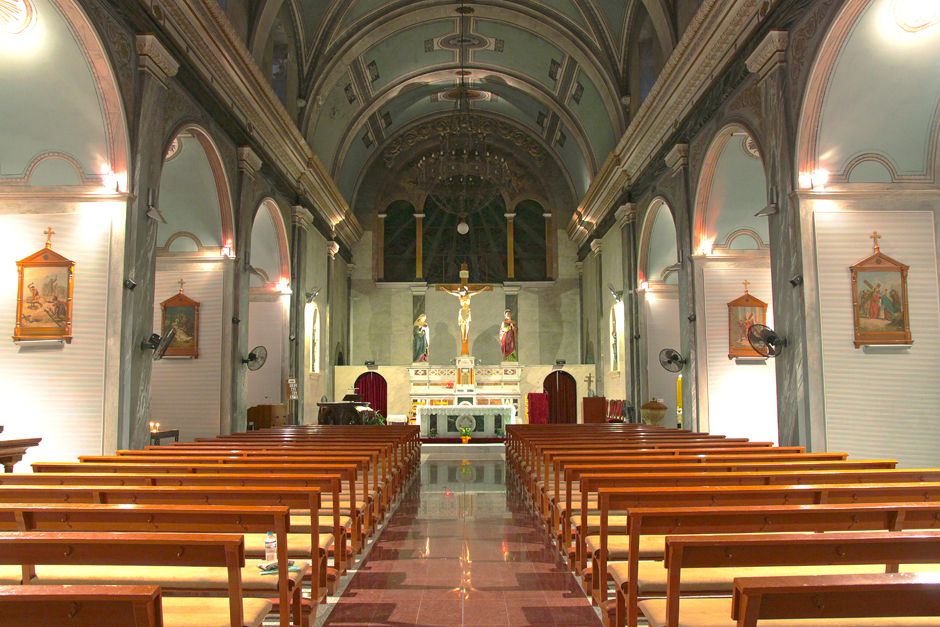 (The left hand side of the Church)

2. THE FIRST CHAPEL. Old marbles of great value can be seen:

– the coat-of-arms of the Lusignan dynasty which reigned in Cyprus from 1191 to 1489; two smaller marbles with the same insignia, but in a different disposition (perhaps these were funerary decorations);

– a white marble representing St Mamas, a Cypriot Saint, riding a lion (it is dated 18th of March 1524);

– On the floor there are a non identifiable tombstone and two Corinthian capitals.

3. THE SECOND CHAPEL. It contains a statue of the dead Christ.

4. THE THIRD CHAPEL. A wooden altar in gothic style with the wooden statues of the Apostles Peter and Andrew, from Spain. This altar is used for the repose of the Blessed Sacrament during Holy Week.

5. THE FOURTH CHAPEL. It is dedicated to St Anthony of Padua. There is a great devotion to this Saint among the faithful. Especially on Tuesdays they come to light candles and pray to the Saint. The wooden statue came from Spain at the beginning of the 20th century.

6. THE FIFTH CHAPEL. It is dedicated to the Sacred Heart of Jesus. The statue is in plaster of Paris. The electric organ was inaugurated on September 25th, 2000.

7. THE PULPIT. It is a work of art from Spain. – This is what has remained of the old pulpit which used to hang above in the same spot until the sixties. Around the pulpit there are five statues carved in wood, representing Christ in front, and the four Evangelists on the sides.

(The right hand side of the Church) 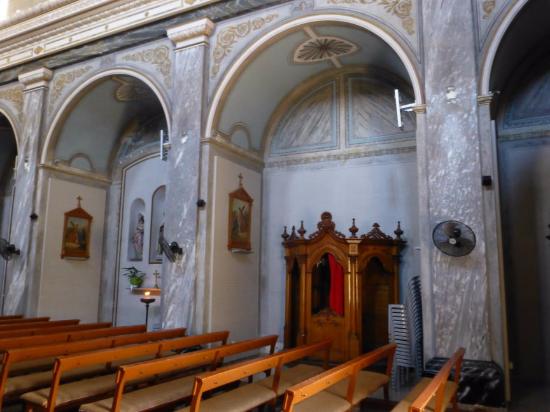 8. THE SIXTH CHAPEL. It is dedicated to the Immaculate Virgin Mary, with a beautiful wooden statue which also came from Spain. The Sacrament of Baptism is administered in this chapel. The font is a carved stone.

9. THE SEVENTH CHAPEL. The wooden statue of St Francis of Assisi came from Spain as well. At Christmas, the representation of Christ’s Nativity is usually set up in this chapel.

11. 12. THE NINTH AND TENTH CHAPELS. Here there are the two confessional boxes. They were hand carved in the carpentry workshop of the Franciscans in Jerusalem. They are dated 1901.

13. THE SANCTUARY. It was entirely renovated in the summer of 1998. The altar was detached from the wall where there is the tabernacle of the Blessed Sacrament. New marbles were added.  The three wooden statues of the Crucifix, Mary and John the Evangelist were taken down from the large window above. That opening (about 30 sq. m.) was closed with a stained-glass window, designed by Angiolo and Simonetta Montagna of Vicenza, Italy, and executed in the workshop of Stebo, Verona, Italy.

Look at the altar from the middle of the Church and you realize that there is an ascensional movement towards the Cross that continues to the stained-glass window and the representation of God the Father on the arch.

At the two sides of the altar there are wooden statues of the Virgin Mary and St Joseph.

14. THE VAULT. The decorated ceiling is in the shape of a barrel-vault, at the centre of which there are some ovals. The first, from the entrance,  is the coat-of-arms of the Royal House of Spain, great benefactors of the Church; in the second an M and an A indicate the name of Mary; in the third is depicted the monogram of the Eucharist, JHS; in the fourth there is an Angel singer; in the fifth there is the figure of the Lamb over the sealed book, as in the vision of the Apocalypse; in the last one there is a dove with open wings: the symbol of the Holy Spirit.

15. THE STATIONS OF THE CROSS.  Inside the arches there are the fourteen Stations of the Cross to remember the passion of the Lord. These are coloured pictures printed on canvas. 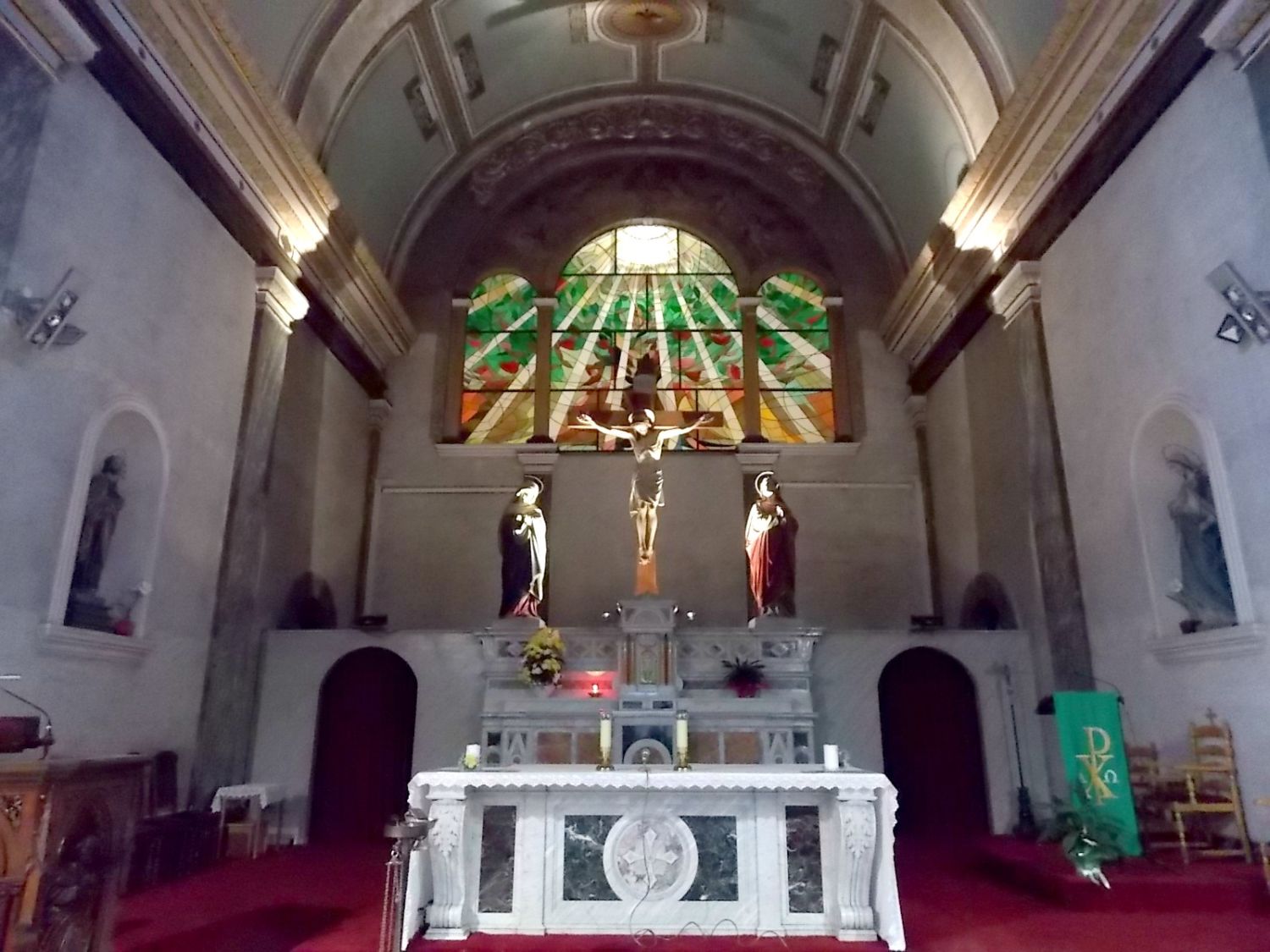