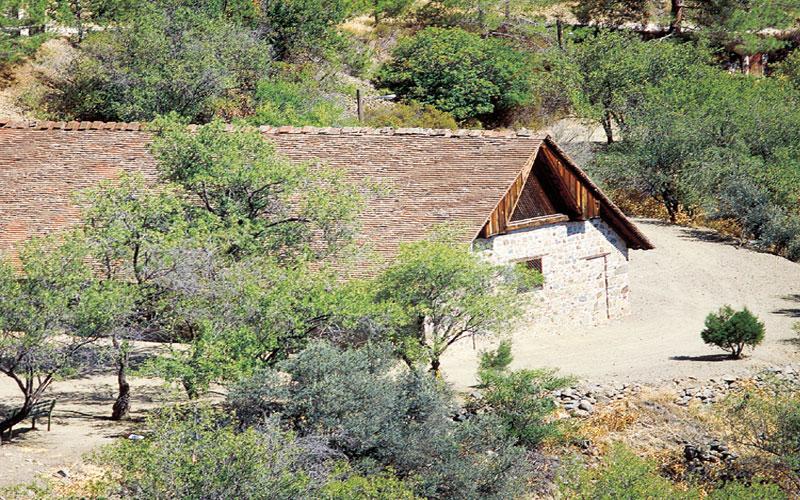 In the central part of Cyprus, in the mountains of the Troodos range, some of the most important monuments of the history of Byzantine painting have survived. These are the painted churches which have to this day preserved brilliant examples of various trends of Byzantine and post-Byzantine monumental art, from the 11th to the 19th century. Ten of these churches have been so far granted World Cultural Heritage status by UNESCO.

The church of Timios Stavros tou Agiasmati is situated in the eastern part of the Troodos mountain range, in the area of Pitsilia, about five kilometers northeast of the village of Platanistasa. In 1985 it was inscribed on the UNESCO World Heritage List which includes nine other painted Byzantine churches of the Troodos range.

This church used to be the katholicon (monastery church) of a monastery bearing the same name, built towards the end of the 15th century. When Vassili Barsky, a Russian monk, visited the island in 1735, the monastery was almost abandoned and inhabited by only one monk (who was also the abbot) and a servant. According to researchers, the name ‘Agiasmati’ derives from the word ‘Agiasma’ (-atos) (sanctified water, spring or well near a church). Another interpretation is that the name is related to Agiasmati in western Asia Minor, a place related to the capture of Constantinople in 1453. It might be the case that refugees from the above area took shelter in Cyprus and later founded a monastery with the same name in the mountains of Cyprus, in commemoration of their homeland. As far as the rest of the monastic buildings are concerned, only traces of the cells survive to the south of the church.