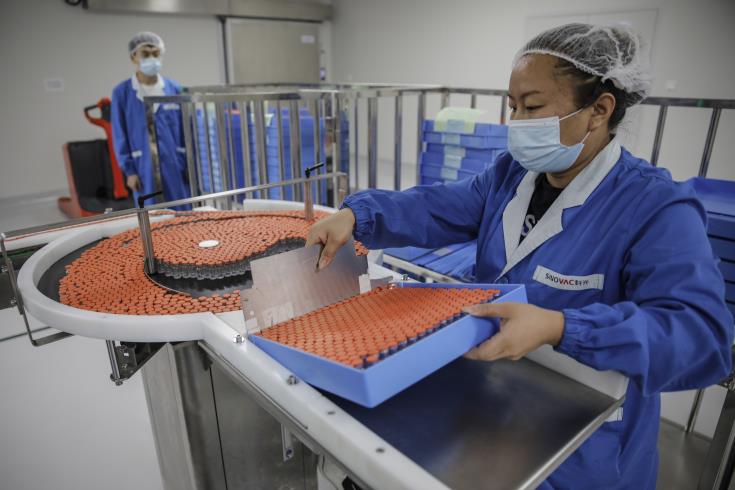 Chinese Ambassador to Cyprus Liu Yantao told the Cyprus News Agency that his country is conducting clinical trials for 16 COVID-19 vaccines, adding that Chinese vaccines can be stored at 8 degrees Celsius, which makes it much easier to transport and distribute and that for now the Chinese vaccines are mostly targeting people from 18 to 60 years old.

Replying to CNA questions about the Chinese vaccines, the Ambassador was also asked how much time would delivery take, if one country orders Chinese vaccines today. He said that “Cyprus is our good friend and China will always do its best for friends in need”, adding that “normally, time for delivery depends on the amount ordered and the sequence of making the order”.

“A good thing about Chinese vaccines is that they can be stored at 8 degrees Celsius. It is obviously much easier to transport and distribute,” he pointed out.

“As Austria, Czech and more EU member states express an interest in Chinese vaccines, we believe that this is about getting safe vaccines as soon as possible and for as many people as possible, regardless of who developed them”, he stressed.

He said that according to China’s Ministry of Science and Technology, China is conducting clinical trials of 16 COVID-19 vaccines, seven of which have entered phase III trials and two have been approved for public use in China.

“China is expected to produce 2 billion doses of COVID-19 vaccines this year. Among them, China`s Sinovac Biotech and Sinopharm-China’s state-owned National Pharmatheutical Group are based on inactivated virus technology, one of the safest methods proven to trigger less severe reactions. The other vaccines being developed in China follow the live-attenuated, viral vector, protein subunit and genetic approaches,” he explained.

As regards efficacy, he said that statistically, the Chinese vaccines vary in efficacy depending on how long they have been in clinical trial and where and how extensively they have been tested.

He said that in China, for example, Sinopharm has already been used in the mass vaccination program which has administered over 24 million doses. It is about 79.34% effective based on data from last month.  He added that Brazil said China’s CoronaVac is 78% effective against mild-to-severe cases, while Turkey said CoronaVac is about 91% effective. Also, UAE reported an 86% efficacy rate for China`s Sinopharm vaccine.

“All these numbers have well passed the 50% threshold set by WHO. For now, Chinese vaccines are mostly targeting people from 18 to 60,” he pointed out.

As regards the countries using the Chinese vaccines, he said that countries like Indonesia, Turkey, Brazil, Chile, Colombia, Uruguay, Laos and Pakistan have granted emergency authorization for China’s CoronaVac, while at least 28 countries have reached a purchase deal with China regarding vaccines.

He noted that Serbia was the first European country to use Chinese vaccine for mass rollout.

The Ambassador said that WHO is assessing two Chinese vaccines for “potential emergency use listing” and  China will provide 10 million vaccine doses to COVAX, a WHO-backed global vaccine-sharing initiative that Sinovac, Sinopharm and CanSino have applied to join.

“China will continue to work with our partners to make COVID-19 vaccines a global public product, as Chinese President Xi solemnly promised,” he concluded.