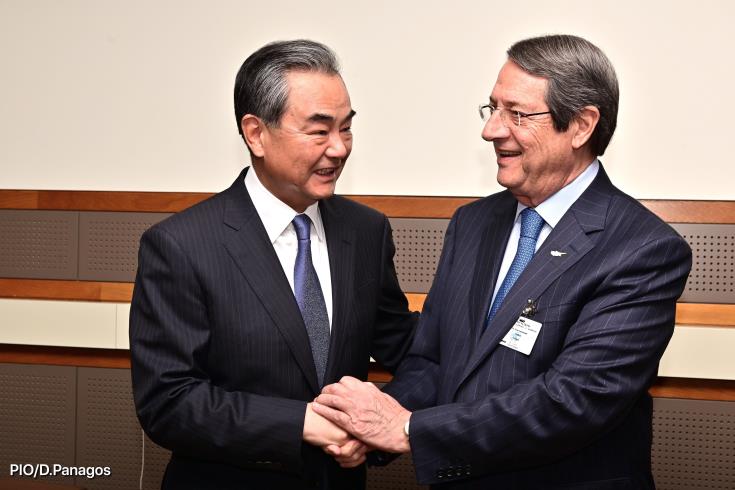 Chinese Minister of Foreign Affairs Wang Yi has expressed his country’s support to the Republic of Cyprus’ sovereign rights, the implementation of UN Security Council resolutions on Famagusta, and efforts to resume negotiations for a Cyprus settlement, based on UN resolutions and decisions.

Government Spokesman Prodromos Prodromou said that in a meeting on Monday at UN headquarters, President of the Republic of Cyprus Nicos Anastasiades and Wang Yi discussed bilateral relations, developments in the Cyprus problem, Turkey’s threats regarding Famagusta, and Turkish provocations in Cyprus’ exclusive economic zone.

The meeting was also attended by Prodromou, Minister of Foreign Affairs Nikos Christodoulides, Cyprus’ Permanent Representative to the UN Andreas Mavroyiannis and other officials.

Prodromou said Wang Yi conveyed the Chinese President’s satisfaction over the meeting he had in Beijing with President Anastasiades, noting that his country considers the Republic of Cyprus to be a trustworthy and important partner, and a junction for international, financial and other relations.

President Anastasiades informed Wang Yi about the continuing violations and illegal actions of Turkey in Cyprus’ exclusive economic zone and its continental shelf, the threats and the schemes which are in contrast with UN Security Council decisions on Famagusta. He also referred to UN efforts to resume negotiations and the obstacles posed by Turkey.

Prodromou noted that the Chinese Minister expressed his country’s support to the Republic of Cyprus’ sovereign rights and referred to UN Security Council decisions on Famagusta, which he said must be implemented. He also assured China supports efforts for the resumption of negotiations with an aim to reach a solution on the basis of UN resolutions and decisions.

Furthermore, President Anastasiades and Wang Yi agreed to continue contacts with an aim to further develop bilateral relations and intensify their international role.