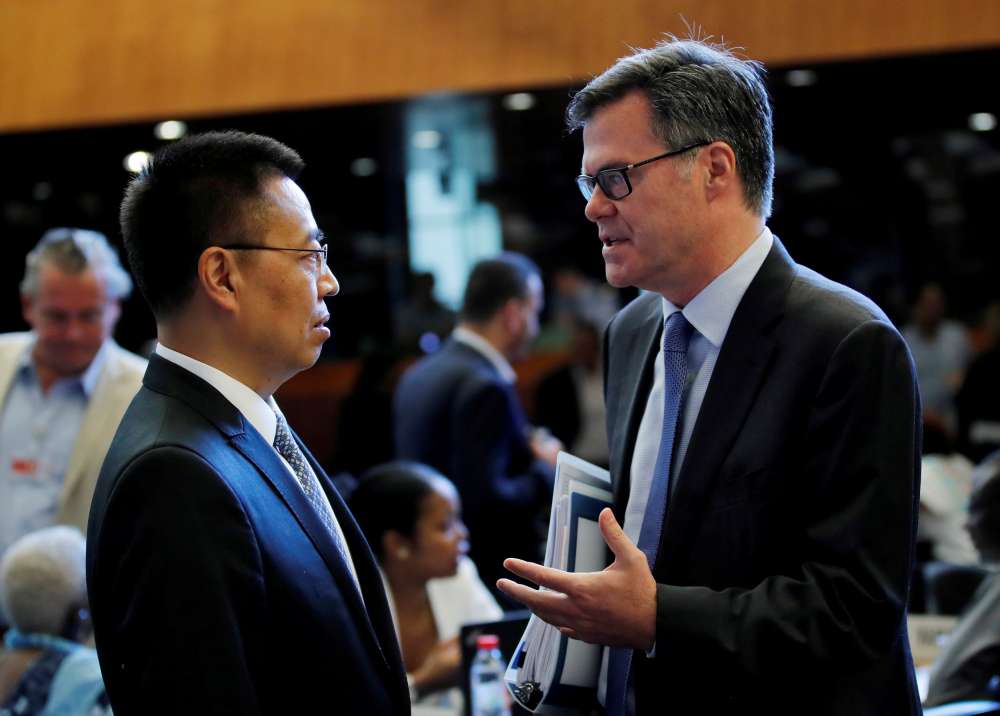 The United States came under fire from China and the European Union on Monday, accused by both major trading partners of taking protectionist measures and bringing the World Trade Organization (WTO) to its knees.

Japan, Switzerland and Canada also criticised Washington, but U.S. trade ambassador Dennis Shea charged that China’s “unfair competitive practices” were harming foreign companies and workers in violation of WTO rules, and he vowed to lead reform efforts at the watchdog.

President Donald Trump’s administration says the WTO is dysfunctional because it has failed to hold China to account for not opening up its economy as envisaged when Beijing joined in 2001.

Shea drew a rebuke from Chinese envoy Zhang Xiangchen who said U.S. tariffs on steel and aluminium products had allowed protectionism under the guise of dubious national security concerns.

“The multilateral trading system is in a deep crisis and the United States is at its epicentre,” said EU ambassador Mark Vanheukelen

The heated words were exchanged at a review of U.S. trade policies, held every two years.

To force reform at the WTO, Trump’s team has refused to allow new appointments to the Appellate Body, the world’s top trade court, a process which requires consensus among member states. As a result, the court is running out of judges, and will be unable to issue binding rulings in disputes.

Shea expressed concern about a wayward WTO dispute settlement system and said the Appellate Body had overreached in some legal interpretations.

Zhang countered that by blocking the selection of judges, Washington was putting the system into paralysis. The EU’s Vanheukelen urged Washington to engage in talks on reform proposals which it presented last month with 11 other members.

Japan and Switzerland also expressed concern at the U.S. use of a national security exemption to justify its steel and aluminium tariffs, a trade official said.

Shea described the United States as “one of the most open and competitive economies in the world”, with among the lowest tariffs globally, denying the U.S. approach was “unilateralist and protectionist”.

China has pursued “non-market industrial policies and other unfair competitive practices” aimed at supporting its domestic industries while restricting or discriminating against foreign companies and their goods and services, he said.

“The WTO is not well equipped to handle the fundamental challenge posed by China, which continues to embrace a state-led, mercantilist approach to the economy and trade,” Shea said.

He did not refer to the dispute on steel which brought the two powers to the brink of a major trade war but defended the U.S. “Section 301” investigation that found in March that Chinese practices related to technology transfer, intellectual property and innovation were discriminatory.

On Section 301, Zhang said the U.S. measures vastly increased tariffs, “bringing back to life the ghost of unilateralism that has been dormant for decades”.

Shea said the United States was committed to addressing concerns on WTO’s functioning, adding: “Reforms are necessary for the continued viability of the institution.”