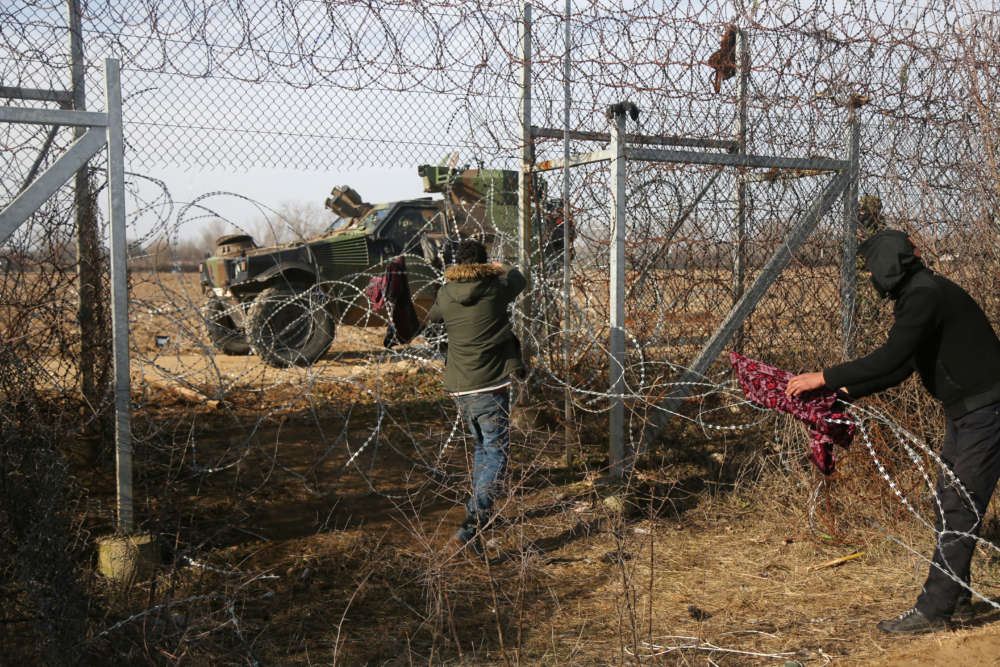 A child died after being pulled from the sea when a boat capsized on Monday off the Greek island of Lesbos, Greek officials said, the first reported fatality since Turkey opened its border last week to let migrants reach Europe.

Greek and Turkish police fired tear gas into crowds caught between the fences in no-man’s land over the weekend.

The Greek coast guard said the boat which capsized off Lesbos had been escorted there by a Turkish vessel. Forty-six people were rescued and two children taken to hospital, one of whom could not be revived.

Another dinghy with about 30 Afghans arrived on Lesbos early in the morning, a Reuters journalist reported from the island. Thirty-two others were rescued in the seas off Farmakonissi, a small island close to Turkey, the coast guard said.

“This is an invasion,” Development Minister Adonis Georgiadis told Skai TV on Monday.

The latest migrant surge follows Turkey’s decision to stop enforcing a 2016 agreement with the European Union whereby it prevented migrants entering the bloc in return for billions of euros in aid.

Turkey, already home to 3.7 million Syrian refugees, has another million arriving on its doorstep from a new surge of fighting in northern Syria and says it cannot handle any more.

Greek officials have accused Turkey of orchestrating a coordinated effort to drive migrants across the frontier.

One Greek policeman accused Turkish soldiers at the Kastanies border gate of “giving cutters” to migrants to cut holes in the fence to get through. Reuters could not independently verify the report.

Some migrants camped near the border had erected makeshift tents or built bonfires to stay warm.

“We’re going to keep waiting here because we left our homes. Those of us who had homes, who had things, we sold them and got money for them. If we want to go back we will sleep in the streets,” said Jamal Kassar, a Syrian migrant.

“There are people who also gave up their (Turkish) identity cards. What can we do, we’re stuck here, we can’t go back home and we can’t cross (the border).”

A Greek government spokesman said a video circulating on social media showing a young man with wounds to the head laid out on the ground near the border was “fake news”. Two Turkish security sources said the Syrian man had died of his wounds.

“We call upon everyone to use caution when reporting news that furthers Turkish propaganda,” spokesman Stelios Petsas said on Twitter.

The EU’s chief executive, Ursula von der Leyen, expressed sympathy on Monday with Turkey over the conflict in Syria but said its decision to let refugees and migrants cross into Eurpoe “cannot be an answer or solution”.

Von der Leyen was due to visit the Greek-Turkish border on Tuesday with Greek Prime Minister Kyriakos Mitsotakis.

Prime Minister Boyko Borissov of Bulgaria, which also shares a land border with Turkey, was due to hold talks in Ankara on Monday evening with Turkish President Tayyip Erdogan on the migrant crisis.

Turkey’s decision to open its border threatens to reverse an agreement that halted Western Europe’s biggest wave of migration since World War Two, the 2015-2016 crisis when 4,000 people drowned in Aegean and more than a million reached Greece.

There are more than 40,000 migrants still living on Greece’s Aegean islands in severely overcrowded camps.

More than 60 non-governmental organisations urged the EU on Monday in an open letter to take urgent action to relocate them across the bloc and speed up the processing of asylum claims.

Erdogan opened Turkey’s border after at least 33 Turkish soldiers sent to Syria to monitor a crumbling ceasefire there were killed last week.

By In Cyprus
Previous articleTwo men in custody for Ayia Napa attempted murder, remanded as suspects in Larnaca case
Next articleCoronavirus to have ‘substantial’ impact on trade – WTO