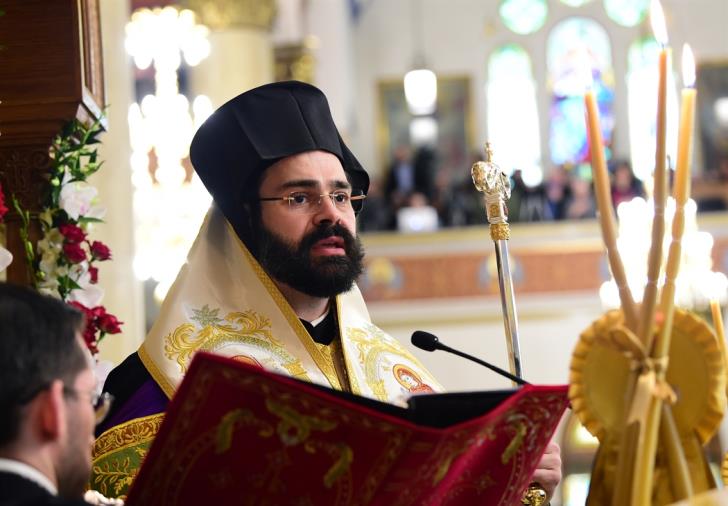 A Greek Orthodox bishop in the United States has taken Bishop Neophytos of Morphou to task for his astonishing remarks on homosexuality.

Metropolitan Nathanael, the spiritual leader of the Greek Orthodox Church of Chicago, said in a letter to his congregation,  that Neophytos’ comments are “factually and morally wrong” and totally inconsistent with the church’s teachings. He also apologised to the faithful on behalf of his brother Metropolitan.

Attorney general Costas Clerides has ordered an investigation into whether the Morphou Bishop’s comments constitute an offence.

Political parties have slammed the statements while government spokesman Prodromos Prodromou issued a written statement saying the remarks violated the legally protected principle of equality of all citizens and should be retracted.

Bishop Chrysostomos of Kyrenia also stepped into the controversy saying that members of the clergy have no place in couples’ bedrooms.

In a letter to his congregation, Metropolitan Nathanael  wrote: “The Orthodox Church embraces scientific truth and medical knowledge, and the opinion to which I am responding has no basis whatsoever in science or medicine,”

And he added: “Homosexuality is simply NOT caused in the way described by the Metropolitan of Morphou, and for this reason, we reject his claims.”

The full letter of the Bishop of Chicago:

I greet you in the love of God, who is “the Father of mercies and God of all comfort, who comforts us in all our affliction, so that we may be able to comfort those who are in any affliction” (2 Corinthians 1:3-4).

Please join me in praying for the souls of those who have fallen in the mass shootings around our nation, for those who mourn their loss, and even for those who perpetrate such great evil, even as our Lord taught us to pray.

Many of you have heard the recent remarks of Metropolitan Neophytos of the Greek Orthodox Metropolis of Morphou in Cyprus and have reached out to me or your parish clergy.

If you were previously unaware of those remarks, I regret bringing this unfortunate matter to your attention at all. It would be shameful even to paraphrase his comments about homosexuality being caused by the actions of one’s parents.

For those with prior knowledge of his opinions, I wish to apologize all the more on his behalf, as a brother hierarch charged also with the care of Christ’s flock.

I am sorrowed by the emotional and spiritual harm that can and does result from ignorant and prurient statements like these. For such a failure of discretion in a bishop, there can be no excuse; neither should anyone attempt to offer exculpation by appeal to the dignity or authority of his office.

Please let me emphasize that what was said was both factually and morally wrong and is wholly inconsistent with Church teachings.

The Metropolitan of Morphou does not speak the heart and mind of the Orthodox Church on this issue. Unfortunately, through the power of social media, the hurtful words of a single person can spread around the world in minutes, compounding the damage exponentially.

His words bring sadness upon all of us, for we all have a family member, friend, or acquaintance who is harmed by the malice behind this opinion.

The Metropolitan’s words, if taken seriously, have the power to drive a wedge of groundless blame between parents and children; they also incite gossipy people to start salacious rumors about couples with gay children. His words also bring shame upon us all, for they invite the world to look upon Orthodox Christians as ignorant, irrational, and bigoted.

Along with this heartfelt apology, I would like to emphasize several teachings of the Church:

First, the Orthodox Church embraces scientific truth and medical knowledge, and the opinion to which I am responding has no basis whatsoever in science or medicine.

Homosexuality is simply NOT caused in the way described by the Metropolitan of Morphou, and for this reason, we reject his claims.

Secondly, there is a point to be made about the legacy of the saints. The Apostle James (3:1) says that those who teach will be judged with greater strictness; and since we all stumble in our speech, we should be cautious about taking on the ministry of teaching. Even the saints are not immune from errors in speaking, as the Bible itself testifies (see Galatians 2:11ff.).

In recognizing the sanctity of a person, the Orthodox Church does not thereby put an imprimatur on everything that person ever said or did. While still in this world, saints make mistakes, both factually and morally. A clear case is seen with Saint Basil the Great in his discourses on the Creation.

While he teaches many wonderful things and demonstrates a remarkable grasp of the science of his day, this preeminent Father of the Church gets a few things wrong, as when he says that heavy rains produce frogs and eels by spontaneous generation (Hexaemeron 9.2).

The Metropolitan of Morphou has attributed his remarks about the parental causes of homosexuality to Saint Porphyrios of Kafsokalivia. Even if this attribution is true, one is not obligated to accept the opinion simply because a truly saintly man may have once held such a view. Holy Tradition is the body of faith that has been believed by all Orthodox Christians in all places throughout all times.

The comments made by Metropolitan Neophytos are neither holy nor part of our tradition.

Thirdly, as I consider ways to shepherd and care for the Metropolis, the clergy of the Greek Orthodox Metropolis of Chicago are hereby put on notice that these opinions about the parental causes of homosexuality are absolutely unacceptable and will not be tolerated.

Priests should not repeat such ideas in sermons or in the course of counseling or the Sacrament of Confession. I will not, as the spiritual leader of our community, stand idly by when others promote an environment of spiritual abuse. Nor will I allow my clergy to use their positions to spew a perverse interpretation of Orthodoxy that is theologically incorrect and harms people.

Such false dogma not only hurts our adherents, but also damages our capacity to bring healing and to bear witness to Christ in society at large.

Fourthly, given the seriousness of this issue, I invite any layperson who has been hurt by or exposed to such false ideas through the words or actions of one of our priests, deacons or monastics—or who in any way has been subjected to their unhealthy interest in sexual matters— to speak directly with me, your Metropolitan. I stand ready to prevent this from happening again and to apologize for any harm done. I am also eager to do something to remedy that harm here in our Metropolis.

Finally, recognizing that Metropolitan Neophytos’ unseemly words could especially impact young people in a negative way, I turn to our youth and young adults and send them the following message: If you know of any young person who has veered away from the Church because of such statements, please communicate to them my apology and appeal in this letter. And even more, if you are that person, please look past the ignorance and bigotry of the vocal few and return to the embrace and love of the many who value you for yourself, as a child of God and a person of infinite worth.

The Scriptures say, “There is … a time to be silent and a time to speak” (Ecclesiastes 3:7b). When our hearts burn within us over works or words of malice, it is time to speak (Psalm 38(39):1-4). The Lord Himself severely castigated those who bound heavy burdens on others without offering so much as a finger to help (Matthew 23:4). The aforementioned theory about human sexuality binds just such an onus of shame. Not only shame, but also hopelessness and despair—for who can undo the actions of parents before one’s own birth?

I personally have met parishioners struggling under similar burdens, placed by the hubris and ineptitude of would-be spiritual fathers. These guides, like their counterparts of old, “shut off the Kingdom of heaven from people” and make it impossible for people attempting to enter to go in (Matthew 23:13). These blind guides inflict immeasurable pain and deep wounds that cannot always be healed in this life. There can be no question that this is a time to speak against this evil presumptuousness in our midst.

Once more, on behalf of the Church and of those who have spoken unjustly, I extend my sincere apology to all our faithful. In this time of the Transfiguration, may the Lord also grant us to be strengthened and enlightened, so that we may understand the purpose of His voluntary Passion: the salvation of sinners and the redemption of all humanity.

With paternal love in Christ and prayers for a blessed Dormition season for all,