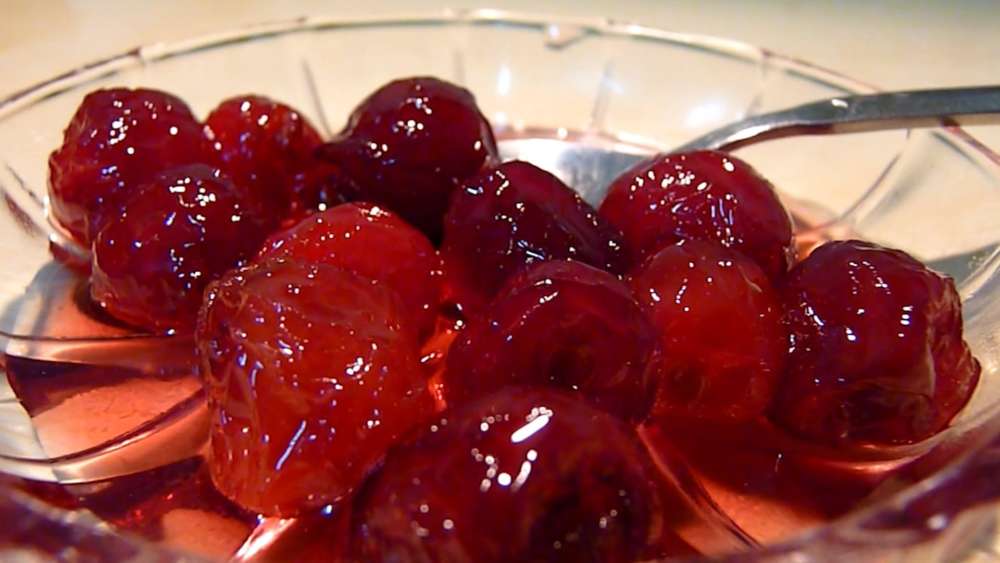 Remove the stalks from the cherries. Dilute the pickling lime in enough water to cover them in a non-metallic bowl. Place the cherries in the bowl and leave for 2 hours, so that they will be firm and not disintegrate during cooking.
Drain and rinse well under running water.
Use a cherry pitter (or a very sturdy straw) to remove the pips, then place the cherries in a bowl with cold water and lemon juice for 2 hours. Meanwhile, boil the sugar with the water in a saucepan, stirring until it has dissolved. As soon as it starts to boil, with the first bubbles appearing, remove the syrup from the heat and allow to cool.
Drain the cherries well and place in the syrup. Add the geranium leaves, and return to the heat, allowing it to reach a boil until the syrup thickens – check by dropping a few drops of syrup in a glass of ice cold water; it should form drops before dissolving. Add the extra lemon juice and bring to the boil again.
Then remove from the heat, allow to cool, and pour into cool, sterilised jars.
Note: Sweet geranium (known as armbaroriza or ‘kiouli’ in Cyprus) is a traditional garden plant, grown in the ground or in pots. It favours warm climates and doesn’t flourish in frosty conditions. Its botanical name is Pelargonium, and it belongs to the Geranium family, which has origins in Africa. The name Pelargonium was given by botanist Johannes Burman in 1738, as he thought that part of the flower resembled the beak of a stork (Pelargos). Apart from culinary uses, sweet geranium leaves are also used to make perfume.