Chaos at the illegal airport of Tymbou due to quarantine (video) 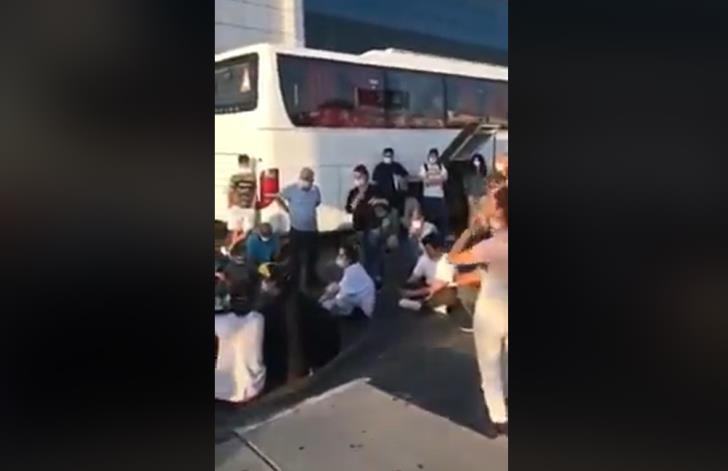 Images of chaos were observed in the occupied areas after the imposition of a partial lockdown and a seven-day quarantine on those arriving from Turkey where coronavirus cases have increased.

According to the information, visitors who arrived through the illegal airport of Tymbou, were trapped there because there was chaos due to the fact that there were no available beds in the hotels that were declared quarantined.

Following this development, flights to the illegal Tymbou airport were suspended until September 13, except in exceptional cases.

Following reactions to yesterday’s decisions by the occupied areas “cabinet” for measures against the spread of the coronavirus in the community and the statements of the “commissioner of administration” Emine Dizdarli that the “cabinet” has no jurisdiction to take decisions on sanitary measures.

So the “Infectious Diseases Committee” of the “Ministry of Health” announced 11 measures which include yesterday’s measures too, today.

The measures, taking into account the possibility of a mandatory quarantine being applied, the “committee” decided to limit flights to two per day and one ship with 75 people aboard total.

As far as the “universities” go, it was announced that from September 20 students who come to the occupied areas will be placed in a mandatory 7-day quarantine under the control of the “Ministry of Health” in dormitories or hotels.

The daily number of student arrivals will be proportional to their ability to stay in quarantine.

By In Cyprus
Previous articleInvestigative Committee for “The Cyprus Papers” sworn in
Next articleFive years later, victims of Charlie Hebdo attack take the stand