Chanel recreates stroll down the Seine in catwalk ode to Paris 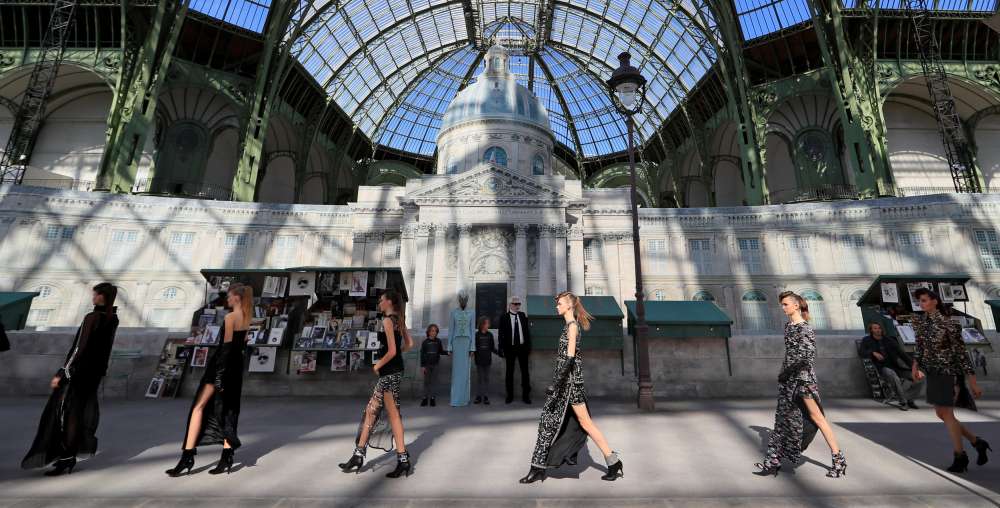 Models strutted past Parisian landmarks, including the green book stalls that line the river Seine, at Chanel’s fashion show on Tuesday, as the luxury label mocked up an entire cityscape to present its latest Haute Couture collection.

The fashion house, known for its extravagant runway displays, set the scene for its winter styles under an imposing recreation of the domed, neoclassical Institut de France that houses the country’s language council, and looms over the river.

The first styles out of the blocks included an array of tweed suits – a Chanel staple reimagined for every collection by octogenarian designer Karl Lagerfeld – in shades of grey that evoked chic Parisian looks from the 1940s.

However the jackets and straight skirts featured slits, creating flares on the arms as models displayed a glimpse of long, fingerless gloves.

Paris Haute Couture Week runs until July 5. Only a handful of brands belong to the select Haute Couture club, as opposed to the fashion labels that present ready-to-wear collections.

To qualify, brands have to be approved by French fashion’s governing body and fulfil criteria covering staffing, skills and the service offered to private clients.

Chanel’s latest show comes weeks after the French brand lifted the lid on its financial results for the first time in its 108-year history, revealing itself as one of the biggest luxury labels in the world by sales.

The company, owned by two secretive French billionaires, rebuffed the suggestion that it could be angling for a sale or stock market listing, saying it wanted to remain private and independent.

By In Cyprus
Previous articleOutrage over US woman posing with slain giraffe
Next articlePresident announces new projects worth €9.75m for Paphos district