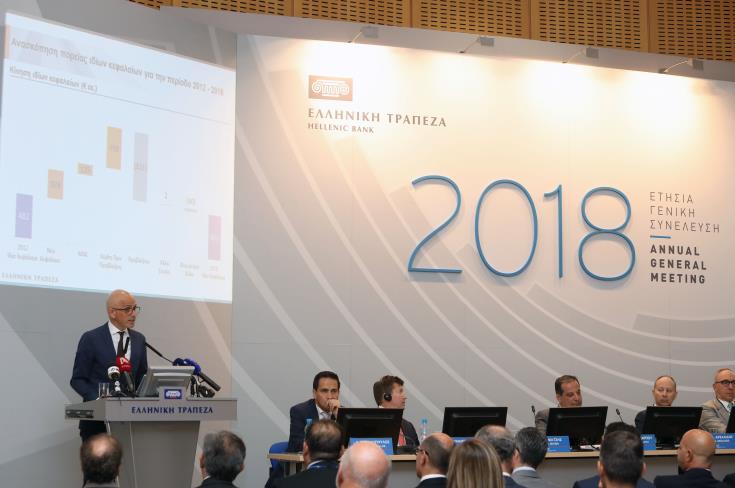 The agreement for the acquisition of certain assets and liabilities of the Cyprus Co-operative Bank (CCB) will completely change Hellenic Bank and its future potential,  the bank’s CEO Ioannis Matsis, told the 44th AGM  on Wednesday.

As he said, this transaction would turn the Hellenic Bank into a leading bank in retail and small and medium-sized businesses banking in Cyprus.

He also said that after the transaction,  Hellenic Bank would turn into a more robust bank with improved financial indicators, such as the levels of Non-Performing Exposures (NPEs), the cost-to-income ratio and expected profitability.

“A Bank that will justify the investment of its shareholders by giving them the appropriate returns and making them proud of their investment,” he added.

Noting that the final conclusion of the transaction depended on the approval of the shareholders and the competent supervisory authorities, Matsis said that the transaction would be the main topic at an upcoming EGM.

Referring to the issue of NPEs, he said that addressing the problem would be a key goal for the Bank in 2018.

He added that the amendments and the new legislation approved on Sunday by the House of Representatives were expected to significantly boost these efforts.

The CEO referred to the bank’s goal to improve risk management, and compliance, noting that the Bank’s main efforts would be to ensure that mistakes of the past would not be repeated and that, among other things, the quality of new loans would remain high. The risks related to money laundering and financing terrorism would be reduced, he noted.

Chairman of the Board of Directors of the Hellenic Bank Euripides Polykarpou spoke about a period full of challenges and major changes for the Bank, the wider banking sector and the Cypriot economy in general.

Referring to the Hellenic Bank’s agreement with CCB, he said this was a key agreement, the completion of which would benefit both tHellenic Bank and its strong position in the market, as well as the wider banking sector in Cyprus, by re-establishing a sense of security and maintaining its stability.

He expressed hope for a positive outcome of the process with the approval of the agreement.

The government of Cyprus approved a deal on the Cyprus Co-operative Bank, following the offer submitted by Hellenic Bank to buy out the bank.

According to the offer, Hellenic undertakes to pay the whole amount of the clients’ deposits worth €9.7 b and assumes assets of 10.3 billion euro, including loans, bonds and cash as well as non-performing loans of €0.5 b. Assets of the Co-operative amounting to €8.3 b will be taken over by the state, most of which is non-performing loans.

The Cyprus Co-operative Bank (CCB) is the second largest credit institution in Cyprus, as of February 2018, the Bank had assets with a book value around €12 b, it had deposits around €11 b and gross loans in the amount around €11 b. CCB has around 2,700 employees and a network comprising around 170 branches in Cyprus.

By In Cyprus
Previous articlePresident: Crucial to reach solution that will bring peace and security across Cyprus
Next articleTourism revenue declines in April, up for period January – April