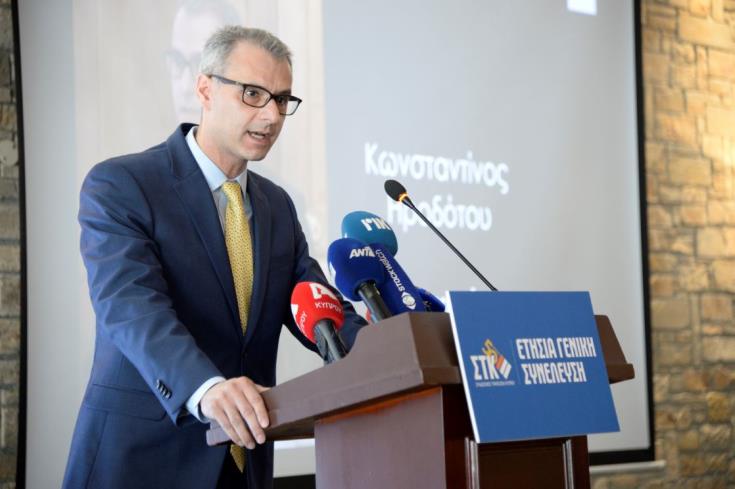 Governor of the Central Bank of Cyprus Constantinos Herodotou, stressed Wednesday that Cyprus needed to develop a culture of prevention against external uncertainties and risks that could affect the economy.

Herodotou in his speech at the Annual General Meeting of the Association of Cyprus Banks (ACB), pointed out that the culture in Cyprus should be changed from reaction to prevention, as he was referring to the current international risks and uncertainties for the economy, such as Brexit and trade protectionist issues. He also noted that the projections for the uncertainties and risks should be taken into account, so that proper planning could be made before conditions outside Cyprus affect the markets.

At the same time, he noted that the fight against money laundering “is a one-way street for Cyprus, not only because it is imposed by regulations, but also because there are wider economic benefits to both the consumers and the banking system”. As he stressed if the country`s risk for investors was reduced, cheaper financing and banking products would be available at lower cost.

At the same time, he noted that legal transactions should not be delayed due to the fight against money laundering, and that banks should invest in staff training and technology for that purpose. He added that neither the challenge of profitability should justify the delays.

With regard to Non-performing Loans (NPLs) in the Cyprus banking system, he said that huge progress has been made, but recalled that NPLs that have been removed from the banking system after sale deals, still remain in the economy.  For that reason, he called for proper use of the restructuring tool by borrowers and he also urged the platforms that have bought loans from the banks to take into account the possibilities for restructuring.

On his part Minister of Finance Harris Georgiades said that the Cypriot banking system operates now in a differentiated European supervisory environment within the framework of the European banking union, which was the joint response of the Member States to the mistakes and omissions that had led to the unprecedented crisis of the past.

As he said Cyprus’ government supports the attempt to complete the European Banking Union that would help in the definitive and complete consolidation of the Cypriot banking system, despite the fact the that the effort to shape the common framework was difficult. He added that if Cypriot banks’ operation and organization were in line with the latest technological and international developments, the prospect of sustainable economic growth in the medium and long term would be largely secured.

He also said that Cyprus was committed to continue that effort, in combination with the other economic measures, in order to be able to leave behind the residues of the economic crisis and raise the bar even higher.

The minister also referred to ESTIA scheme for NPLs reduction, saying that the scheme, as was approved by the European Commission, would be submitted to the Cabinet in about two weeks and should be available to vulnerable borrowers by July.

In his speech during the meeting marking also the 50th anniversary of CBA, Matsis referred to the challenges for the Cypriot banking system, mainly the reduction of NPLs, the low profitability, the need for digital adoption in the banking sector and the introduction of new, more flexible working methods.

By In Cyprus
Previous articleOfficial launch of the first Cypriot youth internship programme in Washington D.C.
Next articleCyprus reduces NPLs by 32.02% between Q3 2017 and Q3 2018 – EC report