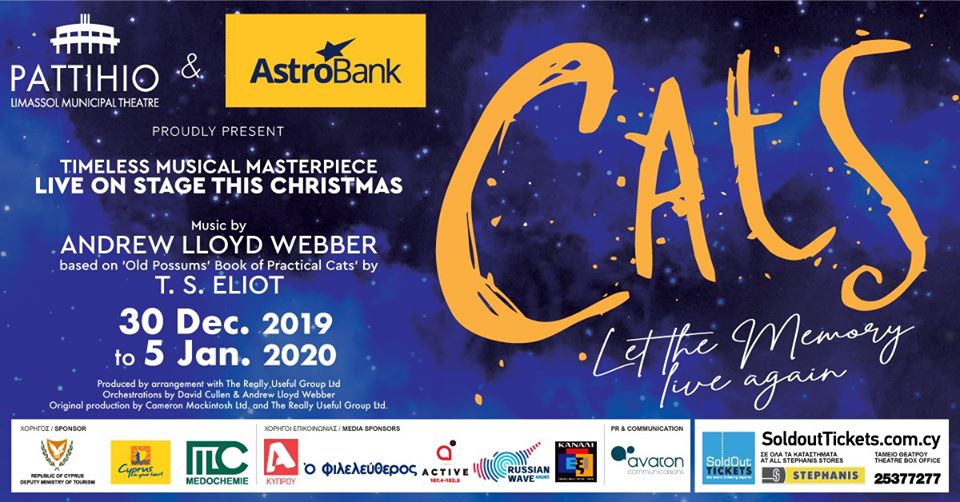 Andrew Lloyd Webber’s timeless musical masterpiece CATS comes to Cyprus for 1 week only this winter. Direct from London with an all-star company of singers and dancers, performances will be accompanied live by The West End Theatre Orchestra.

Cats is a sung-through musical composed by Andrew Lloyd Webber based on the 1939 poetry collection Old Possum’s Book of Practical Cats by T. S. Eliot. It tells the story of a tribe of cats called the Jellicles and the night they make the “Jellicle choice”, deciding which cat will ascend to the Heaviside Layer and come back to a new life. The musical includes the well-known song “Memory” as sung by Grizabella.

Lloyd Webber began setting Eliot’s poems to music in 1977 and the compositions were first presented as a song cycle in 1980. Producer Cameron Mackintosh then recruited director Trevor Nunn and choreographer Gillian Lynne to turn the songs into a complete musical. Cats opened to positive reviews at the New London Theatre in the West End in 1981 and then to mixed reviews at the Winter Garden Theatre on Broadway in 1982. It won numerous awards including Best Musical at both the Laurence Olivier and Tony Awards. Despite its unusual premise which deterred investors initially, the musical turned out to be an unprecedented commercial success, with a worldwide gross of $3.5 billion by 2012.

The London production ran for 21 years and 8,949 performances, while the Broadway production ran for 18 years and 7,485 performances, making Cats the longest-running musical in both theatre districts for a number of years. As of 2019, it remains the sixth-longest-running West End show and the fourth-longest-running Broadway show. Cats has since been revived in the West End twice and on Broadway once. It has also been translated into multiple languages and performed around the world many times. Long-running foreign productions include a 15-year run at the Operettenhaus in Hamburg that played over 6,100 performances, as well as an ongoing run in a purpose-built theatre in Japan that has played over 10,000 performances since it opened in 1983.

Cats started the megamusical phenomenon, establishing Broadway as a global industry and directing its focus to big-budget blockbusters, as well as family- and tourist-friendly shows. The musical’s profound but polarizing influence also reshaped the aesthetic, technology, and marketing of the medium. Cats was adapted into a direct-to-video film in 1998, with a feature film adaptation by Tom Hooper set to follow in 2019.

The “King Lear” at Rialto on January 14