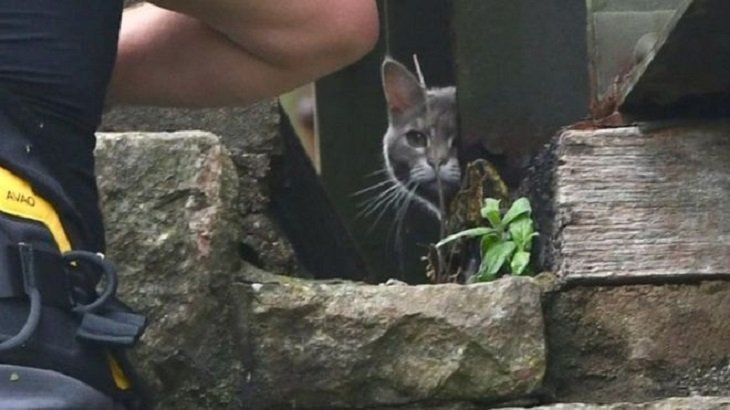 A cat which was stuck on a bridge for six days returned home hours after a £5,000 mission to rescue her was abandoned.

According to the Independent, Hatty, a five year old Maine Coon-Serengeti cross, had been perched on a ledge of the Royal Albert Bridge, which connects Plymouth, in Devon, and Saltash, in Cornwall for almost a week.

Fire crews and the RSPCA rushed out to rescue her and Network Rail were even making arrangements to close the rail line over the bridge, known locally as the Brunel Bridge.

It is thought Hatty was scared on to her precarious perch beneath the line by a passing train.

Firefighters hacked away undergrowth to bring in one of their biggest ladders. Onlookers tried to send food up with catapults.

But Hatty would not be budged and was last seen peering out from behind a crevice under the famous bridge.

Fire crews eventually called off the rescue – which costs the taxpayer about £500 an hour – at 5 pm on Wednesday. However, they vowed to return the next day.

Just a few hours after everyone left, Hatty clambered down and suddenly appeared at home – with evidence she had eaten a seagull to stave off the hunger.

The mother-of-three said she was just about to join a second rescue attempt when she “heard a miaow outside”.

“She is a bit skinny and smelly, very vocal and has now headed upstairs and put herself to bed,” Howden said.

She said: “There’s a part of me that thinks it was sheer stubbornness and determination, mixed with portions of fix, a little bit of cat nip and several men climbing up a ladder and trying to grab her.

“She is going to stay inside, we haven’t broken it to her yet but yes, we’re going to try and make her a house-cat for a bit because I don’t want anymore adventures on the bridges.”

The cat had been missing for two weeks.