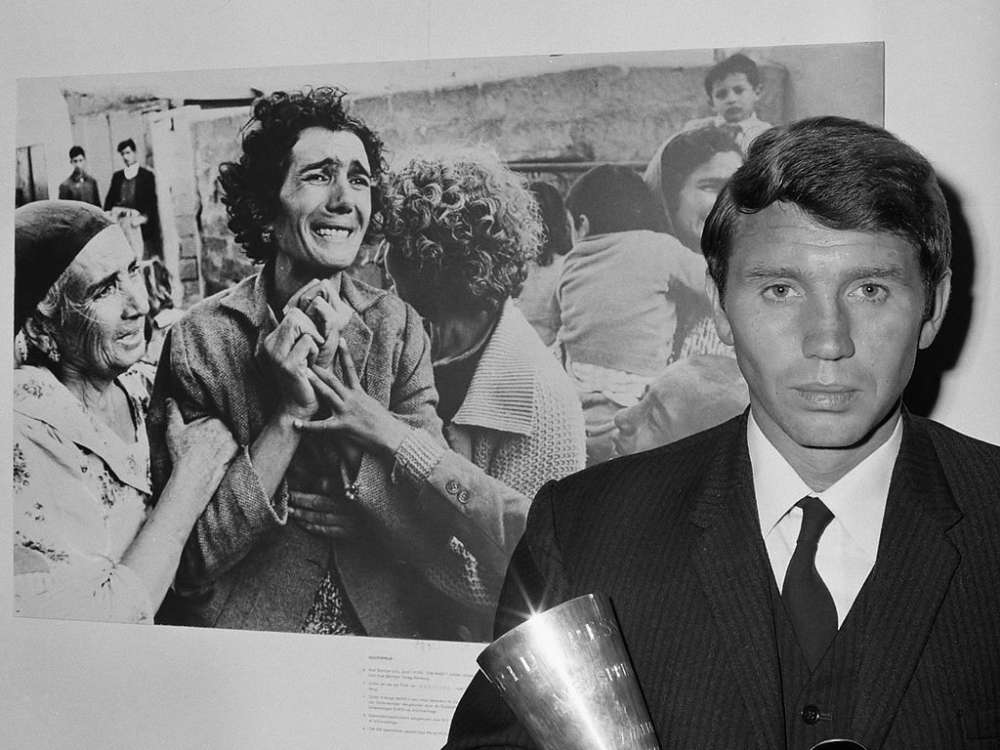 A major retrospective of one of the world’s most acclaimed war ­photographers has opened at London’s Tate Britain.

Over 250 images taken by Sir Don McCullin, 83, will be showcased at the the museum until May 6.

In 1964, McCullin won the World Press Photo of the Year award for his now-iconic picture of Turkish Cypriot Nevcihan Olusum crying for the loss of her husband during the 1964 events in the village of Kazivera, Cyprus.

Olusum’s husband was killed in March 1964 by Greek Cypriots during the intercommunal strife.

In the documentary “McCullin” (2012), the photographer said of the picture: “I go into a village one day and they were finding bodies of Turkish men who were defending the villages and they were coming back and telling the women that their husbands had been killed. Then, you saw these Goyeresque poses of people looking up to God. I’ve noticed this a lot in wars, when people are in deep grief they look up as if they can see God himself there offering them some help.”

McCullin was 28 when he first went to Cyprus. He says that before, he had had never photographed the body of a person who had died violently, and he had no experience of making an image out of someone’s moment of emotional agony.

Born in Finsbury Park, London, in 1935, Don McCullin began by taking photos of the impact of the Blitz on the capital and the impoverished working classes around him. He had built up some experience while doing his national service in the RAF, serving as a photographer’s assistant during the Suez Crisis of 1956 and the Mau Mau rebellion in Kenya.

In 1964, the Observer hired him to come to the island and photograph the intercommunal strife.

“I thought I’m going to do my best here and make an impression and this is my big chance,” he said.

He first went to a Turkish Cypriot village which was surrounded by Greek Cypriot soldiers. “I heard gunfire. Women and children suddenly ran out with mattresses on their head as if a mattress would stop a bullet. This was my baptism of war. I was learning about the price of humanity and its sufferings.”

McCullin says that he became involved with the people he was photographing during the conflict. One day, he visited a village whose whole population was evacuating to go somewhere with more safety. “There was this old lady, she had two sticks and she really couldn’t get those legs moving.”

He says that a British soldier was trying to persuade her to hurry up.”I said this is ridiculous. I took one picture of the old lady and the soldier and I put my camera down and I scooped this old lady up in my arms and it was like scooping up some rag doll and I just ran and ran with her. I don’t know why I did it but I really didn’t want to see the old lady get shot down and killed. It made me feel good, as if I wasn’t just there as some voyeur who was enjoying people’s misery.”

Don McCullin at Tate Britain is on until 6 May 2019. Tickets are £18 for adults. For those looking for a free alternative there is an exhibition of some of his photographs at Hamiltons in Mayfair until 27 April 2019.

The Cyprus intercommunal strife took place in periods between 1956-1974. The crisis of 1963-1964 refers to a series of events of increased political and physical violence.

Nevcihan Olusum passed away on October 18, 2018 at the age of 87 in the village of Pentayia in the occupied north.