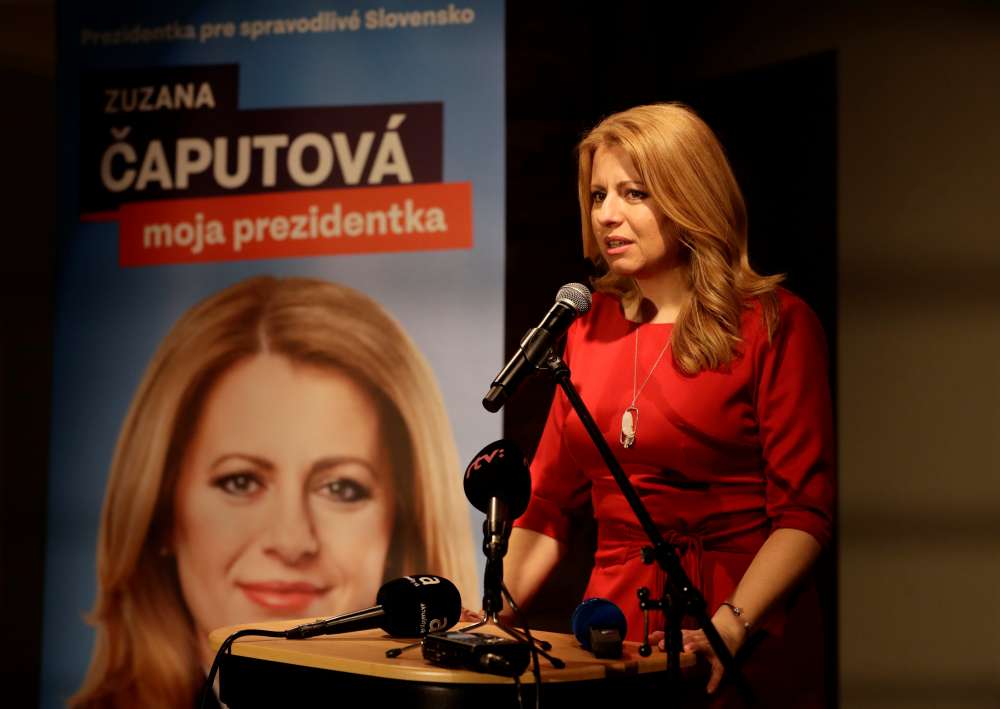 BRATISLAVA, March 30 (Reuters) – Riding a wave of public fury over corruption, liberal lawyer Zuzana Caputova looks set to win Slovakia’s presidential election on Saturday, bucking a trend that has seen the rise of populist, anti-European Union politicians across the continent.

Corruption and change have been the main themes ahead of the run-off vote, which takes place a year after journalist Jan Kuciak, who investigated high-profile fraud cases, and his fiancee were murdered at their home.

A pro-European political novice looking to become the first woman to be Slovakia’s president, Caputova won the first round of voting two weeks ago with 40.6 percent, ahead of European Union Commissioner Maros Sefcovic with 18.7 percent. Sefcovic is backed by the ruling leftist party Smer, which is the largest party in parliament.

She has campaigned to end what she calls the capture of the state “by people pulling strings from behind”, a message that resonates with younger, educated voters, according to opinion polls.

Slovakia’s president does not wield much day-to-day power but can veto appointments of senior prosecutors and judges, pivotal in the fight against corruption.

Five people have been charged with the murders of Kuciak and his fiancee, including businessman Marian Kocner, who was investigated by Kuciak, and who has become a symbol of perceived impunity after more than a decade of rule by Smer. Kocner denies any wrongdoing.

Caputova waged a 14-year fight with a company Kocner represented that wanted to build an illegal landfill in her hometown, a case that she eventually won and that earned her the nickname “Slovakia’s Erin Brockovich”, after the American environmentalist famously portrayed by Julia Roberts in a 2000 film.

“Slovakia is waking up, showing great will to change and hope linked to this and the following election,” Caputova said in the last televised debate this week, hinting at the upcoming European Parliament vote and the 2020 general election.

An opinion poll by Median agency, the only survey released between the first and the second round of voting, put support for Caputova at 60.5 percent and Sefcovic, who has campaigned on his experience and personal relationships with foreign leaders, at 39.5 percent.

Critics of Sefcovic said his long diplomatic career would make him an obedient president rather than an independent one, citing his refusal to distance himself from former Prime Minister Robert Fico, who resigned last year amid mass protests sparked by the Kuciak murder.

Courting the anti-system voters whose candidates lost in the first round of the presidential election, Sefcovic has said he rejected the vision of EU “where the distribution of migrants would be decided by someone other than Slovakia”.

The Moscow-educated diplomat supported the government’s opposition to mandatory migrant quotas suggested by the European Commission, where he is a vice-president.

Sefcovic, who joined the Communist Party in what was then Czechoslovakia just months before communism collapsed in November 1989, stressed his Christian roots in the campaign. He called Caputova’s support for abortion rights and LGBT rights “ultra-liberal” in an effort to win socially conservative voters in the country of 5.4 million.

“Caputova’s victory may encourage people set to replace the ruling class in next year’s general election and finish the fight for more justice and fairness in the country,” said political analyst Michal Vasecka. (Reporting by Tatiana Jancarikova Editing by Frances Kerry)