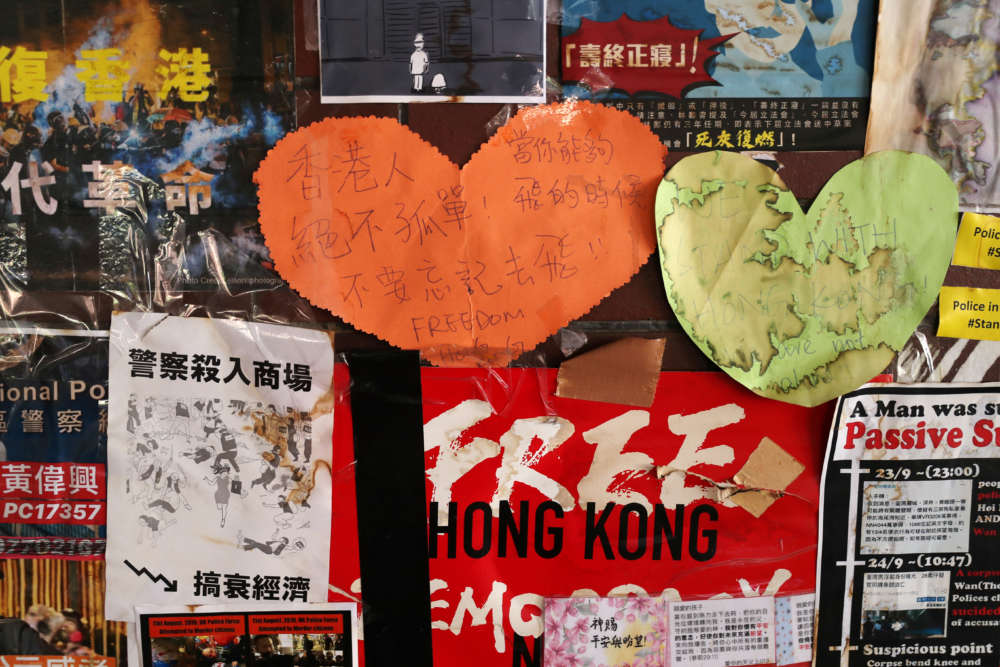 A Hong Kong university campus under siege for more than a week was a deserted wasteland on Saturday, with a handful of protesters holed up in hidden refuges across the trashed grounds, as the city’s focus turned to local elections.

The siege neared its end as some protesters at Polytechnic University on the Kowloon peninsula desperately sought a way out and others vowed not to surrender, days after some of the worst violence since anti-government demonstrations escalated in June.

“If they storm in, there are a lot of places for us to hide,” said Sam, a 21-year-old student, who was eating two-minute noodles in the cafeteria, while plotting his escape.

Another protester, Ah Chung, clad in a face mask and a red Polytechnic University track suit, said he was prepared to stay for the duration.

“I’ll continue to stay here, but hopefully not forever,” he said with a touch of humour.

The handful of protesters still visible on the campus were outnumbered by media and people seeking to provide assistance.

A social worker who would only give his name as Sendon said he had crossed paths with four protesters on Saturday and was concerned about their mental state.

“They’ve been in this highly stressful environment for so long, over 120 hours, and they have no easy way to release this stress,” he said. “We’re trying to urge them to come out in a gentle manner.”

Many of the remaining protesters were in hiding, fearful of possible arrest and wary of those urging surrender, said Woo Kwok Wang, the 22-year-old acting president of the university’s student union.

“They are afraid of contact with other people because they will think that maybe social workers or lawyers are going to persuade them to surrender,” he said.

Woo said he had been on the campus since Wednesday to provide support for the students, and would only leave when he felt his help was no longer needed.

About 1,000 people have been arrested or registered by police in the siege in the Chinese-ruled city, about 300 of them younger than 18.

Police have set up high plastic barricades and a fence on the perimeter of the campus. Towards midday, officers appeared at ease, allowing citizens to mill about the edges of the cordon as neighbourhood shops opened for business.

Some roads next to the campus had reopened by Saturday afternoon.

Rotting rubbish and boxes of unused petrol bombs littered the campus. On the edge of a dry fountain at its entrance lay a Pepe the frog stuffed toy, a mascot protesters have embraced as a symbol of their movement.

Scores of construction workers worked at the mouth of the Cross-Harbour Tunnel, closed for more than a week after it was first blockaded, to repair toll booths smashed by protesters and clear debris from approach roads.

The repairs got underway as a record 1,104 people gear up to run for 452 district council seats in elections on Sunday.

A record 4.1 million Hong Kong people, from a population of 7.4 million, have enrolled to vote, spurred in part by registration campaigns during months of protests.

Young pro-democracy activists are now running in some of the seats that were once uncontested and dominated by pro-Beijing candidates.

The protests snowballed from June after years of resentment over what many residents see as Chinese meddling in freedoms promised to Hong Kong when the former British colony returned to Chinese rule in 1997.

Beijing has said it is committed to the “one country, two systems” formula by which Hong Kong is governed. It denies meddling in the affairs of the Asian financial hub and accuses foreign governments of stirring up trouble.

However, Australia’s Age newspaper reported on Saturday that an apparent Chinese intelligence service agent is seeking asylum in Australia after claiming to have details on Beijing’s political interference in Hong Kong, Taiwan and Australia.

The defector, identified as Wang “William” Liqiang by Nine network newspapers, is reported to have provided the Australian Security Intelligence Organisation, or ASIO, with the identities of China’s senior military intelligence officers in Hong Kong, the paper said.

In an interview with Fox News Channel on Friday, U.S. President Donald Trump said he had told Chinese President Xi Jinping that crushing the Hong Kong protests would have “a tremendous negative impact” on efforts to end the two countries’ 16-month-long trade war.

“If it weren’t for me Hong Kong would have been obliterated in 14 minutes,” Trump said, without offering any evidence.

“He’s got a million soldiers standing outside of Hong Kong that aren’t going in only because I ask him, ‘Please don’t do it, you’ll be making a big mistake, it’s going to have a tremendous negative impact on the trade deal,’ and he wants to make a trade deal.”