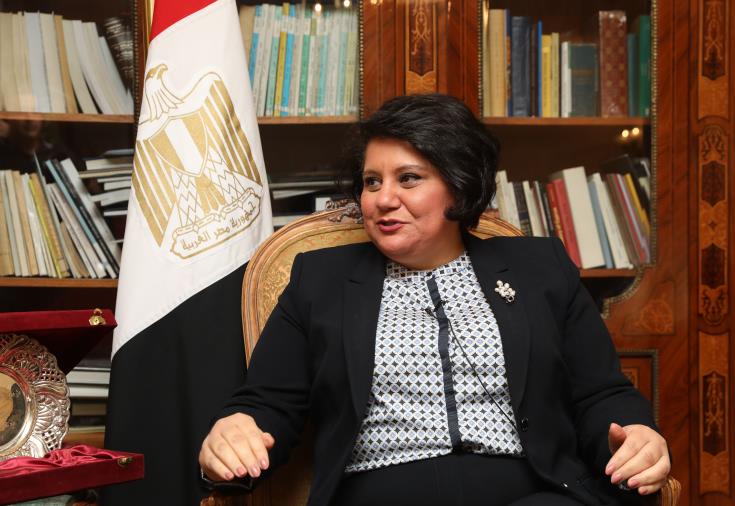 The escalation in the Eastern Mediterranean following Turkey’s activities off Cyprus’ waters will be among the topics the leaders of Egypt, Cyprus and Greece will discuss in the upcoming 7th trilateral Summit, in Cairo, on October 8, with Egypt’s Ambassador to Cyprus, Mai Khalil, underlining her government’s principled position both in relation to the Cyprus issue, as well as with regard to rising tension around Cyprus.

In an interview with Cyprus News Agency ahead of the Summit, Ambassador Khalil reiterates Cairo’s concerns over Turkey`s announced intention to drill in the vicinity of the Republic of Cyprus, in EEZ block 7, adding that such “unilateral measures” increase tension.

“Egypt is a country that advocates the need to adhere to international law, and respect the sovereignty of states on their well established and internationally recognized borders” the Ambassador further notes, when asked about efforts by Athens and Cairo to delineate their exclusive economic zones, and appears confident that the two governments will overcome any technical difficulties on this matter.

Moreover, Khalil does not preclude the addition of new partners in the Eastern Mediterranean Gas Forum “when deemed beneficial to all parties involved” and says that Egypt and Cyprus will cooperate closely over climate change in the coming period.

Cooperation in the energy sector, along with EU-Egypt relations and the role of the Suez Canal Economic Zone in advancing economic opportunities between Africa and Europe, are also expected to be discussed by the leaders of Egypt, Cyprus and Greece, in Cairo, as the three countries prepare to sign a number of agreements, the Ambassador adds.

“This Summit comes as a natural continuation of the ongoing mutually beneficial dialogue between Egypt, Cyprus and Greece in many fields, especially economic, cultural, touristic, in additional to the high-level political cooperation, whether bilaterally, or in international fora” Khalil says.

She adds that the leaders of the three countries – President of Egypt Abdel Fattah el-Sisi, President of Cyprus Nicos Anastasiades and the Prime Minister of Greece Kyriakos Mitsotakis – will also address efforts to combat terrorism and extremism, the situation in Libya and Syria, as well as the Palestinian issue.

“The Cyprus problem and the current escalation within the maritime zones in the eastern part of the Mediterranean Sea will be discussed” as well, she notes.

When asked by CNA about Ankara’s illegal activities in Cyprus’ maritime zones, the Ambassador speaks about Egypt’s “principled position vis-à-vis the Cyprus problem in general, and the situation arising from the tensions in the Eastern Mediterranean in particular.”

From this premise, she notes that in solidarity with Cyprus, the Egyptian Foreign Ministry issued a few statements, the latest of which on October 5, expressing concern with regard to Turkey`s announced intention to drill in the vicinity of the Republic of Cyprus, in block 7, as this “represents a continuation of unilateral measures that serve to increase tension in the Eastern Mediterranean region.”

Egypt has also called for the necessity to avoid escalation and commit to respecting and implementing the rules and provisions stipulated by international law, she adds. Furthermore, the Ambassador says that Egypt supports the efforts to reach a settlement to the Cyprus problem, in accordance with the relevant United Nations resolutions.

A year ago, during the 6th Trilateral Summit, in Elounda, Crete, then Greek Prime Minister referred to his government’s efforts to overcome technical difficulties with Cairo over the delimitation of the exclusive economic zones of Greece and Egypt. Asked about progress, the Ambassador says that due to the technical and legal nature of this issue, there are specialized committees, involving experts in this field, not only between Egypt and Greece, but also for other countries with which Egypt shares maritime and sea borders.

Such discussions and negotiations are guided by international law and relevant United Nations conventions, and accordingly bilateral agreements are concluded between states, she adds.

“I would like to seize this opportunity to emphasize that Egypt is a country that advocates the need to adhere to international law and respect the sovereignty of states on their well established and internationally recognized borders. I am thus confident, that efforts to overcome any sort of technical difficulties, will be achieved through dialogue and mutual respect and in accordance with international law and the relevant treaties” Ambassador Mai Khalil underlines.

Referring to the establishment of the Eastern Mediterranean Gas Forum, the Ambassador notes that energy has become nowadays “the main economic driving force for the stimulation of other tracks of cooperation” between countries, and the region is no exception to this. “This forum aims to eventually establish a regional gas market, so as to offer the citizens and consumers in our region, more competitive and affordable prices” she says.

With its headquarters in Cairo, and Egypt, Jordan, Israel, Italy, Greece, Cyprus, and the Palestinian Authority as members, Khalil says that this Egyptian initiative, since its inception, has provoked the attention and interest of many other countries, in the region and beyond. “When the time is seen right, and when deemed beneficial to all parties involved, the format of involving new partners will be subject to discussion within the forum” she adds.

As for Cyprus-Egypt relations, the Ambassador notes that the bilateral agenda “is rich and multifaceted, but also continuously developing to incorporate new modalities of cooperation to serve the interests of both countries and nations.”

The recent visit of the Egyptian Minister of Defence, General Mohamed Zaki, to Cyprus in September 2019, comes as a natural development to the enhanced dialogue between competent Ministries on both sides, she adds, while noting the several visits conducted by the Minister of Defence of Cyprus to Egypt over the past year.

“Cooperation in the fields of combatting terrorism, and energy security, is discussed not only from a military perspective between the Ministries of Defence, but also diplomatically and politically, as was the case during the recent visit of the Egyptian Foreign Minister to Cyprus in July 2019” Khalili adds.

Climate change is according to the Ambassador another sector of expanding cooperation, following the initiatives undertaken recently by the President of Cyprus, as well as the Egyptian government during the United Nations Climate Action Summit, in New York.

Egypt and Cyprus attach great attention to climate change, she says, adding that formulating a comprehensive strategy to address the threats and prevent their impact on the people and the environment is high on the foreign policy agendas of both countries.

When it comes to the initiative of Cyprus to establish a regional action plan to coordinate countries of the Eastern Mediterranean and the Middle East in climate change issues, Khalil says that Cairo is in close cooperation with the Cypriot side regarding this significant initiative.

She adds that Egypt, together with the United Kingdom, also presented within the United Nations Climate Action Summit, a similar, and holistic initiative entitled “A Call for Action: Raising Ambition for Climate Adaptation and Resilience”.

Cyprus was one of the first countries to support this initiative, the Ambassador says and notes that there will be close coordination in this field, stemming from both countries’ awareness about the dangerous impact of climate change in the Eastern Mediterranean region.

Asked finally about any trilateral or bilateral agreements to be signed in the framework of the Summit, the Ambassador of Egypt says that a few documents are in the final process of getting approved by the three countries in several different fields “and we are hoping that they will be signed during the upcoming Summit.”