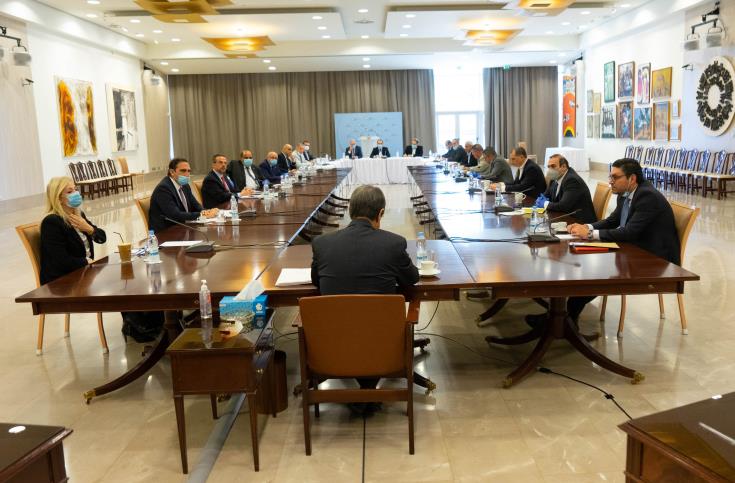 A ministerial committee is working on an exit strategy to ease the coronavirus lockdown and restart the economy which will be submitted to the Council of Ministers on April 29, government spokesman Kyriakos Koushos said on Tuesday.

His statements followed two meetings with business and trade union leaders and with stakeholders in the tourism and construction sectors chaired by President Nicos Anastasiades at the Presidential Palace earlier today.

The president is due to attend a briefing by the epidemiological surveillance unit of the ministerial committee tomorrow and will on Thursday brief party leaders on the Covid-19 situation and the economy.

The government has made clear that any decision for the gradual easing of the lockdown in order to restart on the economy will be based on the advice of the scientific team monitoring the outbreak.

But with a steady decline in new coronavirus countries, an economy in virtual paralysis and other countries in Europe beginning to ease their restrictions, pressure is mounting on the government.

Koushios said that at the meetings, the president had briefed social partners on the existing situation and had heard their views regarding the exit strategy being drafted by the government.

The president told participants that the decisions will be based on epidemiological data, the recommendations of the scientific team, the test results and the capability of taking and maintaining safety measures, he added.

Business leaders said all participants were thinking along the same lines — that steps must be taken to restart the economy.

By the end of the week, employers will submit their proposals for a gradual return.

The first phase will include small shops and businesses. Keve is proposing the lifting on the prohibition on Sunday work, for work at construction sites and for professions with a small number of employees, its chairman Christodoulos Angastiniotis said.

Keve has also proposed that hair dressers salon barbers, the self-employed, retail trade and car sales to be able to return to work during the first stage.

Some hospitals and surgeries as well as open sport areas could also return. Ship crews currently stuck on various ships should be facilitated.

“Decisions should be taken by the end of the month so that beginning of May and provided the results continue to be good as regards the coronavirus outbreak, we can restart the economy,”  he added.

OEB president Yiorgos Petrou said that construction sites should open first, under strict supervision. It added that state services should operate so as to help the economy.

Regarding the three stages over which the economy will restart, he said that construction was first and tourism last as this would depend on the airports, which airlines will be operating flights and what international regulations my be introduced.

SEK general secretary Andreas Matsas said that among the issues discussed was averting dismissals and health and safety measures.

PEO general secretary Pambis Kyritsis said health and safety took precedence, adding that it was essential that restarting of the company should be controlled with clear safeguards for the health of workers.

He also highlighted the need for social protection measures and protection from dismissal.

Deok general secretary Iosif Anastasiou said it was important to be prudent, starting with small companies and construction where work is carried out in the open. And he too highlighted the need to protect jobs.