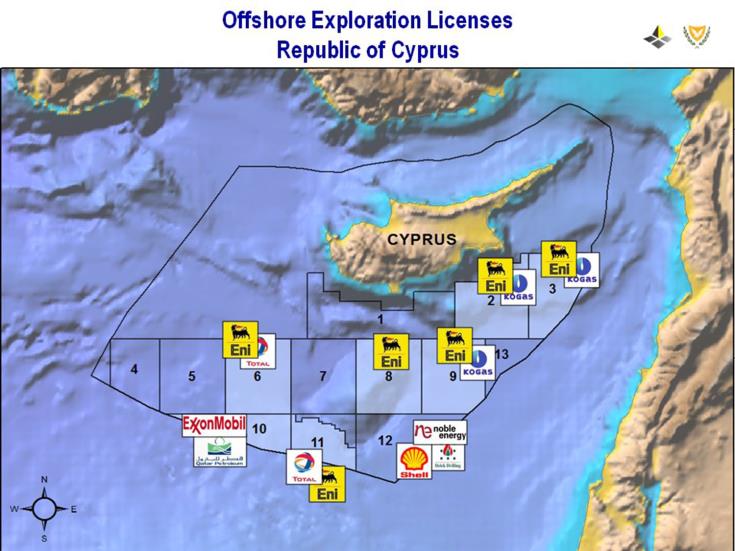 Cabinet decided Wednesday to invite companies that already have exploration licences for other blocks in Cyprus Exclusive Economic Zone (EEZ) to bid for block 7.

It also approved the tender documents for the creation of infrastructure for the import of liquefied natural gas (LNG) and announced a plan to subsidise roof insulations, amounting to 3 million euros.

Speaking after the Cabinet meeting, Mister of Energy Yiorgos Lakkotrypis said that, due to its geology, different companies have expressed interest for block 7 and thus it was decided to invite companies having licences in neighbouring Cyprus’offshore blocks to express interest. The process, he added, was similar to the process of the third licensing round and would concern the companies awarded “licenses” in blocks 6, 8, 10, 11 of Cyprus EEZ.

The Minister clarified that the government decided to proceed with that process in block 7 due to “very specific geological reasons” that have to do with “Calypso” field, a discovery in block 6 of Cyprus’ EEZ, announced by Italian company Eni last February. Eni is the Operator of Block 6 with 50% of participation interest while Total is partner with the remaining 50%. Calypso was considered by Eni a promising gas discovery that confirmed the extension of the “Zohr like” play in the Cyprus EEZ.

Invited to comment on information that French Total and American ExxonMobil are planning to create a consortium for block 7, Lakkotrypis said that he did not want to predict what the companies would do. The companies will have one month to submit their bids for the blocks. The bids will then go to an advisory committee and a negotiation process will follow.

Referring to the tender for the creation of infrastructure for the import of LNG in Cyprus, he said that the estimated cost for the project was approximately 300 million euro, including 100 million euro which are subsidised by the European Union.

On the Cabinet’s decision to announce a plan for roof insulation of houses, Lakkotrypis said that the plan would be launched next Monday with a budget of 3 million euros and will be open until the amount is exhausted.

The plan provides the funding of 25% of the eligible costs for each application with a maximum grant of 1250 euros .