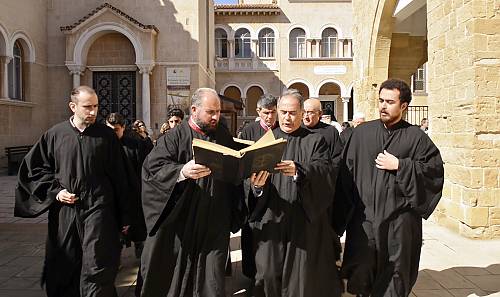 The committee listed the spring rite of Juraiski Karahod in Belarus as in need of urgent safeguarding.

The nine new additions to the representative list besides the Byzantine chant range from the seasonal droving of livestock along migratory routes in the Mediterranean and in the Alps to the traditional technique of making Airag in Khokhuur and its accociated customs in Mongolia and the Ommengang, Brussel’s annual historical procession and popular festival.

Highlighting and musically enhancing the liturgical texts of the Greek Orthodox Church, it is inextricably linked with spiritual life and religious worship. This vocal art is mainly focused on rendering the ecclesiastical text; arguably, the chant exists because of the word (‘logos’), since every aspect of the tradition serves to spread the sacred message.

“Passed on aurally across the generations, its main characteristics have remained over the centuries: it is exclusively vocal music; it is essentially monophonic; the chants are codified into an eight-mode or eight-tone system; and the chant employs different styles of rhythm to accentuate the desired syllables of specific words.

“Though the Psaltic Art has always been linked to the male voice, women chanters are common in nunneries and participate in parishes to some extent. In addition to its transmission in church, the Byzantine chant is flourishing due to the dedication of experts and non-experts alike – including musicians, choir members, composers, musicologists and scholars – who contribute to its study, performance and dissemination. ”

The Representative List seeks to enhance visibility for the traditional practices and know-how of communities without recognising standards of excellence or exclusivity.

Photo from the Cyprus National Commission for UNESCO.