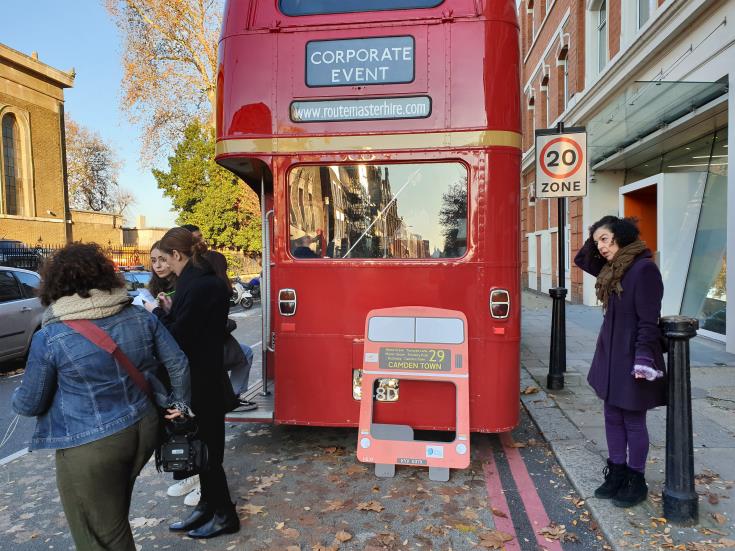 It was a trip down memory lane for a number of London Cypriots who yesterday travelled on a Number 29 double decker bus as it followed the route from the Cathedral Church of All Saints in Camden Town to the Cypriot Community Council in Wood Green – a route emblematic of the diaspora’s historic northward expansion.

The guided bus tour traced the contribution of the Greek Cypriot diaspora to London’s multiculturalism following the route of the 29 bus, which is dotted with places and spaces that tell the community’s history, past coffee houses, restaurants, tailor shops, and churches.

The bus followed a route which for decades coincided with the geographical and cultural presence of the Cypriot community in the British capital.

From a church which holds a special place in the lives of London Greek Cypriots to the community centre representative of the organised presence of British Cypriots, along well-known roads, past familiar shops and other landmarks, the bus journeyed into the history but also the present of the Cypriot diaspora of London.

The journey was an initiative of Petros Karatsareas, lecturer of linguistics at the University of Westminster and Athena Mandis from Queen Mary University.

“The idea was to give the Cypriot community of London a trip down memory lane, following a route which is very familiar to them, the route of bus 29. The route from Camden Town to Wood Green coincides with the history of Cypriots’ migration to London from the 1950s to the present,” Karatsareas told the Cyprus News Agency.

Mantis, a second generation London Cypriot, who teaches film at Queen Mary added: “For us who grew up here, these places are part of our history, Camden, Green Lanes, Haringey. Our parents started there and just like the route of bus 29 slowly, slowly, moved further north.  London Cypriots ask each other, ‘does bus 29 pass from there’. This bus was important to the people who came here from Cyprus, they went to work and back home and to church.”

Passengers, both older and younger members of the community, had the opportunity to listen to audio-recorded testimonials and share their own stories of transnationalism and diaspora life.

The initiative was part of the Being Human Festival of the University of London, organised in cooperation with the British Academy and the Arts& Humanities Research Council.