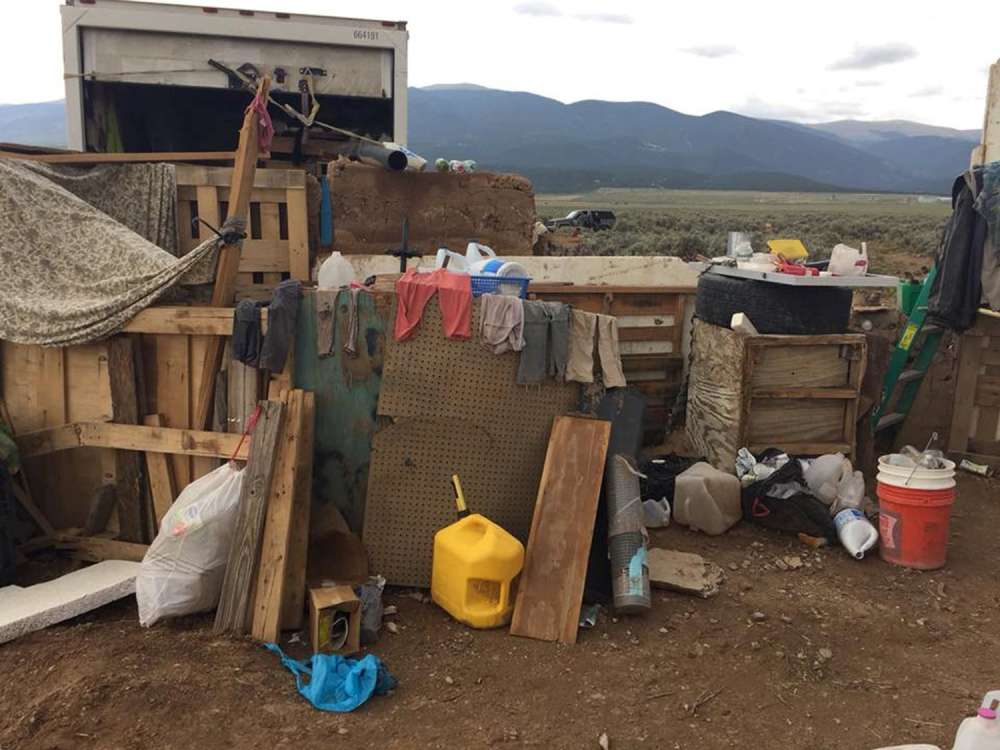 A prominent New York City Muslim cleric said on Thursday that he was baffled by events leading to his grandson’s presumed death and the arrest of his son and four other adult relatives on charges of abusing children at a compound in New Mexico.

Siraj Wahhaj, a Brooklyn-based imam, spoke to reporters at his mosque, Masjid Taqwa, a day after his son, two daughters, a daughter-in-law and a son-in-law were charged with 11 felony counts of child abuse in New Mexico.

The son, Siraj Ibn Wahhaj, 39, also was charged with custodial interference in the alleged abduction of his 3-year-old son, Abdul-Ghani Wahhaj, last December from the Atlanta home of the child’s mother.

The search for the missing boy and his father ultimately led investigators to the ramshackle compound on the outskirts of Amalia, New Mexico, north of Taos near the Colorado border.

Eleven children ranging from 1 to 15 years of age were found ragged and starving at the compound last Friday after sheriff’s deputies raided it. They were placed in protective custody.

The imam, who was the first Muslim to offer a prayer before the U.S. House of Representatives, said he is the biological grandfather of nine of the children in the case, including Abdul. Remains of a young boy believed to be those of Abdul were found at the compound on Monday.

The elder Wahhaj said, without elaborating, that some of the children have said they saw Abdul alive as recently as three weeks ago, adding, “One of them said, ‘Yeah, we buried him over there.'”

His son, said by authorities to have been heavily armed when arrested, was taken into custody with his brother-in-law, Lucas Morton. His wife Jany Leveille and two sisters, Subhannah and Hujrah Wahhaj, were detained and later arrested.

In court petitions seeking to hold them without bond, prosecutors accused them of training the children to use firearms to carry out school shootings, but no related charges have been filed.

The elder Siraj Wahhaj said he has been cooperating with authorities in their investigation and that he had not had direct communication with his son since a search for him was launched after Abdul’s disappearance.

He said he did not know what his son and daughters were doing in New Mexico or what prompted them to go into seclusion, but he was anxious to get to the bottom of a situation he described as “bizarre” and “weird.”

“As far as my son and my daughters are concerned, I want to make sure they get good legal representation. We want to find out what happened,” he said. “Even if it’s against them. We stand in judgment. God stands in judgment against them, and we stand on the side of truth.”

The cleric recounted having a brief exchange with his daughter Subhannah at some point through a go-between on Facebook. Subhannah later reached out to someone in Atlanta saying, “‘I need some food. We are starving.”

The imam said he instructed that intermediary to “find out where we should send the food.” He said once his daughter provided the location, “We gave it to the police. That’s why the police came in.”

His account dovetailed with a chronology given earlier in the week by Taos County Sheriff Jerry Hogrefe, who said he obtained a search warrant for the compound after police in Georgia got a plea about starvation from someone in the compound and shared it with his investigators.

The imam said his son had worked for a New York company providing security to corporate executives and celebrities and was licensed to carry firearms in 36 states. He described him as “high-strung” at times but not violent or “radical.”