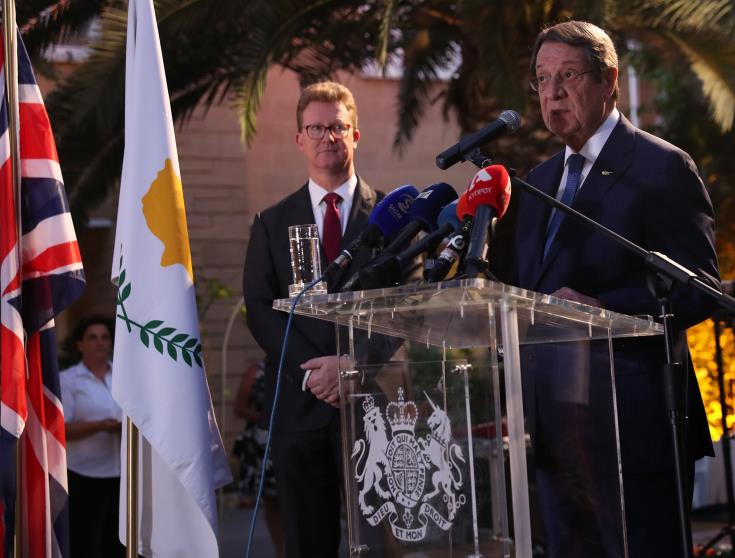 British Prime Minister Theresa May  said in a letter to President of the Republic Nicos Anastasiades, that she opposes Turkey’s planned drilling activities and fully recognises Cyprus’ right to explore and exploit its natural resources.

May was responding to a letter Anastasiades had sent to her last month, following statements by British Minister for Europe Sir Alan Duncan, who said that exploratory drilling for hydrocarbons should not be taking place in areas where sovereignty is “under dispute”. The British Minister, who was responding to questions by British MPs, at the House of Commons, was referring to Turkey`s decision to launch drilling activities in Cyprus’ Exclusive Economic Zone.

Speaking on Tuesday evening, during a reception hosted by the British High Commission in Nicosia, on the occasion of Queen Elizabeth’s 93rd birthday, President Anastasiades referred to the “latest alarming developments within the Exclusive Economic Zone of the Republic of Cyprus which constitute a blatant violation of our sovereign rights and of international and EU Law,” involving the arrival of a Turkish drillship in the Cypriot EEZ in early-May for planned drilling activities.

Private Derbydos was honoured to be introduced to the President of Cyprus @AnastasiadesCY last night by the @UKinCyprus High Commissioner @StephenLillieUK at #QBP19CY.

What an example of our close friendships – a Cypriot Ram ? Mascot serving in @bfcyprus Infantry Battalion! pic.twitter.com/YJlTN9fzeK

“I had the opportunity to discuss this critical matter several times with Prime Minister May and I wish to express my deep appreciation for UK’s full support and tangible solidarity with Cyprus, as clearly expressed in her letter dated May 26, 2019, through which she opposed Turkey’s planned drilling activities and fully recognised the sovereign rights of the Republic of Cyprus to explore and exploit its natural resources,” Anastasiades said, adding he will “not give attention to any statements contrary to the above by any UK Government official, which might negatively affect the joint aim of further advancing our partnership.”

The tension in the Cypriot EEZ, he added, “regrettably, deters our efforts to resume negotiations on the Cyprus problem, particularly in a period when the UN Secretary General is trying to provide renewed impetus to the process, following the appointment of his Special Envoy Mrs. Jane Holl Lute.”

Anastasiades furthermore noted that “our side, as I have repeatedly stated, remains strongly and truly committed to the resumption of the negotiations on the six-point framework that Mr. Guterres has set as the basis for the way forward.”

“However,” he went on, “all stakeholders involved should clearly determine whether or not they have the sincere readiness to engage constructively in meaningful negotiations so as to finally establish the conditions for achieving lasting peace, allowing all Cypriots to live in a normal and independent state and closely working together for the prosperity and security of all; free from any foreign dependencies.”

Moreover the President referred to the recent escalating provocative actions by the Turkish side, in the buffer zone, at the area of Denia, highlighting “the importance of maintaining a calm situation throughout the whole island.”

“To this end, I count on your support both through your Government and the British contingents of UNFICYP, in order to avoid a deterioration of the situation which would also negatively affect the prospect of resuming negotiations,” he said.

In his address, Anastasiades referred to the strong ties between UK and Cyprus, noting that “on the political and diplomatic fields, our relationship has been one of constant evolution.”

On his part, speaking during the reception, British High Commissioner, Stephen Lillie, said that his country has followed recent developments in the Mediterranean “with concern.”

“We believe it is critical for stability in the region and for the integrity of the Rules-Based International System that disputes are resolved, not through force, militarisation or coercion, but through dialogue and in accordance with international law.  We have called on Turkey not to drill in this area,” Lillie added.

He furthermore reiterated that “as a committed friend and partner of the Cypriot people, and as a guarantor power, Britain has continued to support a just, democratic and lasting solution to the Cyprus problem, so that Cyprus can achieve her full potential as a regional hub of peace, stability and prosperity in the Eastern Mediterranean.”

By In Cyprus
Previous articleTrump administration ban on cruises to Cuba creates chaos for U.S. travelers
Next articleCyprus, Greece and Armenia agree to further expand cooperation in first trilateral meeting of Foreign Ministers