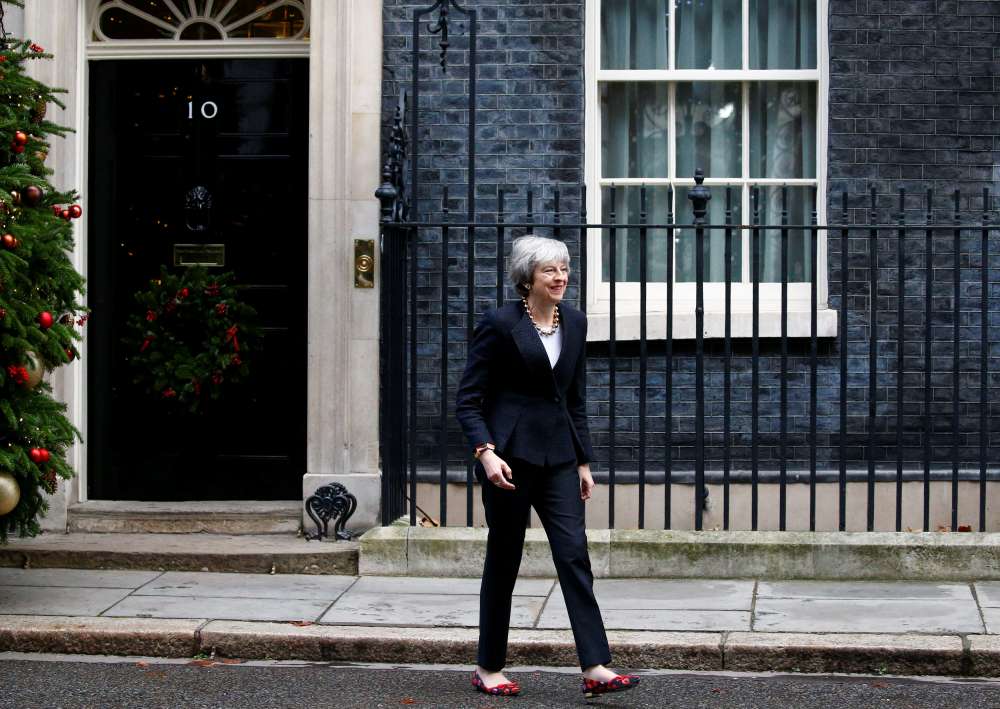 British ministers are divided over the government’s next steps if Prime Minister Theresa May’s Brexit deal with the European Union is not approved by parliament next month.

With just under 100 days until Britain is due to leave the EU on March 29, deep divisions in parliament have raised the chances of leaving without a deal and increased calls for a second referendum to break the deadlock.

Work and Pensions Secretary Amber Rudd said late on Wednesday there would be a “plausible argument” for another referendum if parliament failed to reach a consensus on the way forward, something May has repeatedly ruled out.

House of Commons leader Andrea Leadsom said a so-called people’s vote would be unacceptable and that a “managed” no-deal would be an alternative.

“A managed no-deal would simply mean that it was agreed on both sides that there would be bilateral arrangements, that we would have some forms of mitigation,” Leadsom told Sky News. “That would be possible should it come to that.”

May pulled a vote on her deal from parliament earlier this month after admitting it would be defeated.

She is seeking “assurances” from EU leaders over the so-called Irish backstop, an insurance policy to avoid a hard border between the British province and EU-member Ireland that its critics fear will trap Britain in a customs union with the EU indefinitely.

May’s spokesman said a second referendum was not plausible and that the EU had been a clear a “managed” no-deal was not available. The prime minister was focused on getting the assurances parliament wants on the backstop, he said.

“The EU has been very clear that there is no withdrawal agreement available which does not include a backstop,” he said. “The best mitigation against the ‘no-deal’ is passing the prime minister’s deal.”

Leadsom said the government intends and expects to get May’s deal through parliament when it brings it back for a vote in mid-January. Leadsom later told parliament that several days of debate ahead of that vote would begin on Jan. 9.

May has repeatedly said that if her deal is rejected then the world’s fifth-largest economy might have to leave without a deal – the nightmare option for big business – or that Brexit might be thwarted altogether.

The government said on Thursday it had reached agreements with Norway, Iceland, Liechtenstein and Switzerland which mirrored elements of its exit deal with the EU on issues such as citizens’ rights.

Some ministers have indicated they would quit the government if the no-deal option became official policy.

Earlier this week, the government said it would implement plans for a no-deal Brexit in full and begin telling businesses and citizens to prepare.

With no clear majority in parliament for any way forward, several ministers have said they would support the idea of holding an “indicative vote” of lawmakers as to what Brexit option they would like to see pursued.

Rudd said parliament should reach a majority on how Britain leaves the EU, but if it could not then another referendum was an option.

“I have said that I don’t want a people’s vote or a referendum in general but if parliament absolutely failed to reach a consensus, I could see there would be a plausible argument for it,” she told ITV.

France’s European Affairs Minister Nathalie Loiseau said Britain could hold a second Brexit referendum. “The door remains open but it will be up to them to choose, not us,” Loiseau said.

Russian President Vladimir Putin, who some British lawmakers have accused of meddling in the referendum vote, said on Thursday that May had little choice but to implement Brexit and steer clear of a second referendum because not doing so would undermine faith in British democracy.