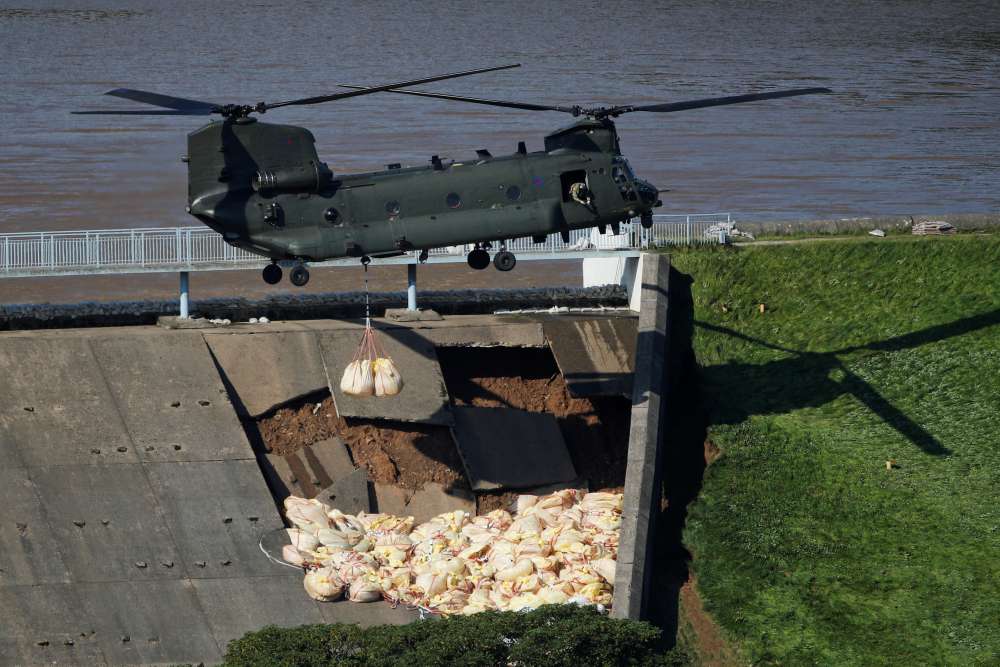 A British military helicopter dropped sacks of ballast on Friday onto the outer slope of a dam that has partially collapsed and is at risk of bursting and flooding the town of Whaley Bridge in Derbyshire.

More than a thousand residents of Whaley Bridge, in central England, were evacuated on Thursday and told to take pets and any medication they needed with them after the dam was badly damaged during recent heavy rains.

Prime Minister Boris Johnson said the environment minister would chair the government’s emergency committee meeting on Friday to coordinate the response and he had spoken to fire and police officials to thank them for their work.

“My thoughts are with those who have had to leave their homes and all of those who are affected,” he said.

Officials said the dam, which holds a reservoir above the town, was in danger of failing, putting lives at risk.

Police said a Royal Air Force Chinook helicopter was now shifting 400 tonnes of aggregate – a mixture of sand, gravel and stone – onto the reservoir wall to reinforce it. Engineers have also been pumping water out of the reservoir.

“Our message today remains the same: As there is still a risk the dam will fail, please stay away from the area,” said Kem Mehmet, the assistant chief constable of Derbyshire police.

“We have evacuated more than 1,000 people from the areas that would be immediately affected by floodwater should the wall fail.”

Britain’s Environment Agency issued a severe flood warning for the area, saying river levels in the River Goyt which runs through the town could rise rapidly.

Heavy rain this week led to flash floods in areas across northern England causing bridges to collapse and road closures. Britain’s Met Office said on Wednesday downpours had led to 50 mm (2 inches) of rain falling in just one hour.

“We don’t know how long this operation will take to conclude, but we and our colleagues in the emergency services, partner agencies, Environment Agency and military are doing everything humanly possible to save the reservoir wall and to protect the town,” Mehmet said.