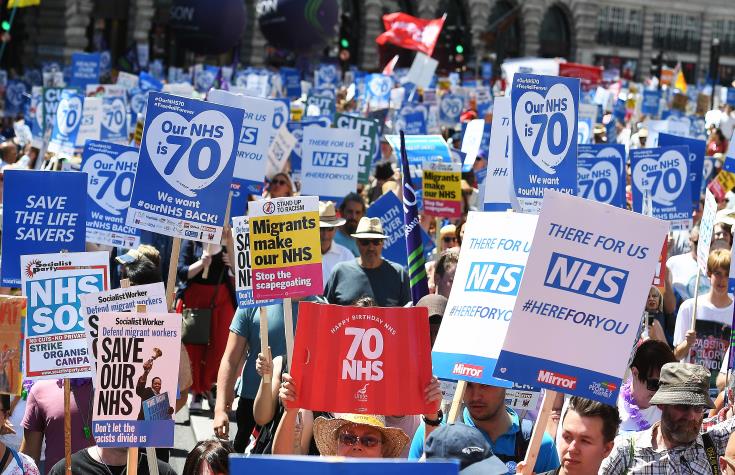 Major achievements of the UK’s National Healthcare Service (NHS), including the eradication of diseases like polio, the world’s first liver, heart and lung transplants and more recently mechanical thrombectomy, were highlighted Wednesday, during a reception at the British High Commissioner’s residence to mark the 70 years of the NHS.

According to a press release issued by the High Commission, Cyprus’ Health Minister Constantinos Ioannou, the head of Cyprus’ State Healthcare Services Organisation (SHSO) Sir David Nicholson and various officials, academics and professionals from the health sector attended the reception.

British High Commissioner Stephen Lillie hailed the incredible work being done in the NHS which employs 1.5 million people, putting it in the top five of the world’s largest employers. In 2014, the Commonwealth Fund declared that in comparison with the healthcare systems of 10 other countries, the NHS was the most impressive overall.

Lillie expressed hope that the NHS experience, “both what has worked well and not so well”, will prove useful in Cyprus’ efforts to establish its own general healthcare scheme (GESY). The British High Commissioner noted that ambitious government reform is of course not easy to deliver.

“The NHS was born out of a long-held ideal that good healthcare should be available to all, regardless of wealth. When it was launched in 1948, it was based on three core principles, that it meet the needs of everyone, that it be free at the point of delivery and that it be based on clinical need, not ability to pay”, he said.

According to the High Commissioner, these three principles have guided the development of the NHS for the past 70 years and remain at its core and with the exception of some charges, such as prescriptions, optical services and dental services, the NHS in England remains free at the point of use for around 65 million people in the UK.

He admitted that the British NHS has faced difficulties over the years and continues to face the challenge of how to care for an ageing population within resource constraints. “But the principle of offering free healthcare to all is an honourable one and deeply cherished by all across the political divide in the UK. It is for these reasons that I have hope for Cyprus’ own plans in this area for the long-term benefit of all Cypriots”, Lillie stressed.

On his part, Sir David Nicholson described Cyprus’ workforce in the health sector, many of whom have links with the UK through training or practicing within the NHS, as incredible and added how impressed he was with the political commitment for the establishment of GeSY. He welcomed the decision of the Cypriot government and parliament to go for a single-payer system and described the legal framework as robust.

Both the British High Commissioner and the chairman of the SHSO wished every success to efforts for an effective public health system for all Cypriots.

By In Cyprus
Previous articleAirfares will decrease, says Transport Minister
Next articleUnstable weather conditions during the weekend; coasts more likely to be affected