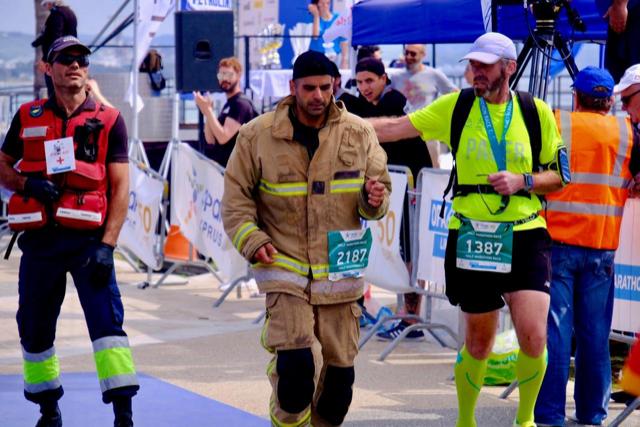 British Bases Fire and Rescue Service employee Avgoustinos Chatziyiannis has been awarded with a CBF Commendation, according to a press release issued this week.

“The Run to Fight charity event to raise money for children battling serious disease is only two years old but it has quickly become established as one of the main fundraisers in the British Forces Cyprus Calendar,” the release also said.

“The brainchild of Avgoustinos Chatzigiannis, its success over the past two years has seen thousands of Euros raised for the Elpida Foundation,” it added.

Last week, the hard work and dedication the fire fighter showed in getting the event started, has seen him awarded with a Commander British Forces Cyprus Commendation.

This is an achievement that ranks as high as any other he has achieved in his 15-year service, he said.

“I feel profoundly grateful and honoured for the monumental appreciation from the people who believed in me and my efforts and the drive behind the Run to Fight initiative.

“There are so many people involved, the running communities from both the SBA and Republic of Cyprus, sponsors, volunteers, the Episkopi Station, the staff who’s support and engagement has been invaluable and of course my colleagues and especially the members from my organisation.

“This award belongs to everyone, every single person who has positively contributed to the success of these profoundly important events.”

Chatzigiannis who was born in Limassol and is married and father of two said: “I’m a firefighter at heart and as such, I consider my job the best in the world. Being in the Fire and Rescue Service is more than job, it is a service to the communities and the world.

“In an emergency situation, it carries a lot of responsibility as people are counting on us to save them, or their properties, so we need to deliver the service that society expects from us. I feel a gargantuan sense of appreciation to be part of the Fire and Rescue Service.”