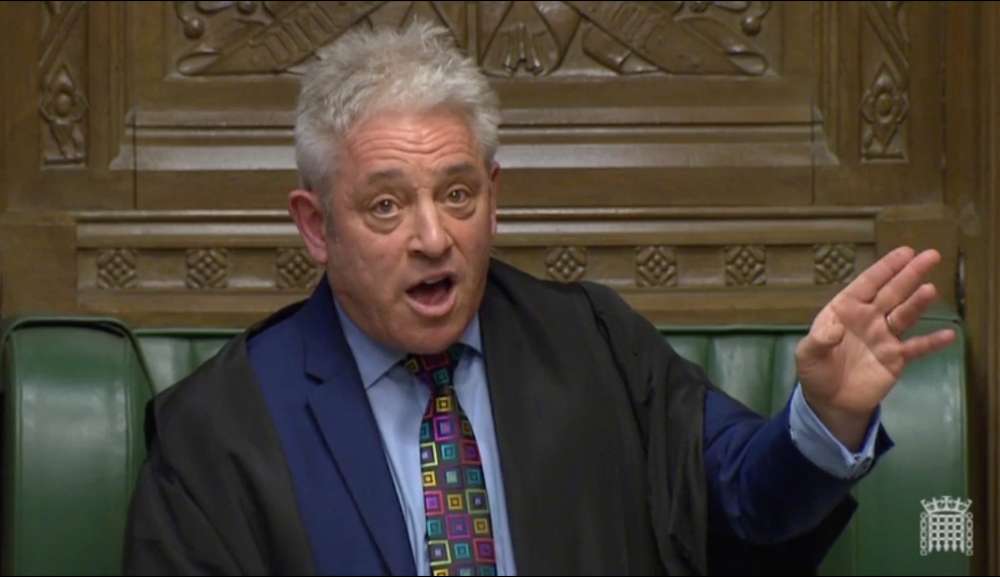 The House of Commons speaker plans to block Prime Minister Boris Johnson from bypassing parliament to take Britain out of the European Union, the Telegraph newspaper reported on Wednesday.

John Bercow told an audience in Scotland that lawmakers can prevent a no-deal Brexit scheduled for the end of October and that he would fight any attempt to prorogue, or suspend, parliament “with every bone in my body”.

“We cannot have a situation in which parliament is shut down – we are a democratic society,” the Telegraph quoted Bercow as saying at an event on the sidelines of the Edinburgh Festival.

“And parliament will be heard and nobody is going to get away, as far as I am concerned, with stopping that happening,” added the 56-year-old who says he voted “Remain” in the 2016 Brexit referendum.

Johnson has said Britain will leave the world’s biggest trading bloc on Halloween, whether it has a divorce agreement or not, but a majority of lawmakers oppose that.

They have been investigating what parliamentary procedures can be used to prevent a no-deal Brexit, and in July backed proposals to make it harder for Johnson to do that.

Johnson, who replaced Theresa May on July 24 after she failed three times to get her withdrawal agreement through parliament, has refused to rule out proroguing the House of Commons and Brexit supporters have vociferously encouraged him to do so if necessary to ensure an exit on Oct. 31.

His top advisor Dominic Cummings has said that Johnson could delay calling a general election until after Oct. 31, even if he lost a no confidence motion, allowing for a no-deal Brexit while parliament is dissolved.

However, the Telegraph cited Bercow as saying: “The one thing I feel strongly about is that the House of Commons must have its way.

“And if there is an attempt to circumvent, to bypass or – God forbid – to close down parliament, that is anathema to me and I will fight it with every bone in my body to stop that happening.”

On Wednesday former finance minister Philip Hammond said Johnson risked betraying the 2016 referendum by allowing “unelected people” intent on wrecking any chance of a deal with the EU to “pull the strings” of his government.

In his first intervention since resigning, Hammond wrote in the Times that parliament “would make its voice heard” and that a no-deal Brexit “must not happen”.

Hammond said Johnson did not appear on track to reach a deal with the EU. “The pivot from demanding changes to the (Irish) backstop to demanding its total removal is a pivot from a tough negotiating stance to a wrecking one,” said Hammond.

“The unelected people who pull the strings of this government know that this is a demand the EU cannot, and will not, accede to.”

There was no independent confirmation of Bercow’s comments in Scotland from his office, nor immediate response from Johnson’s Downing Street office.

By In Cyprus
Previous articleFire rages on Greece’s Evia, threat to people averted
Next article587 drivers caught driving under influence of drugs in 18 months