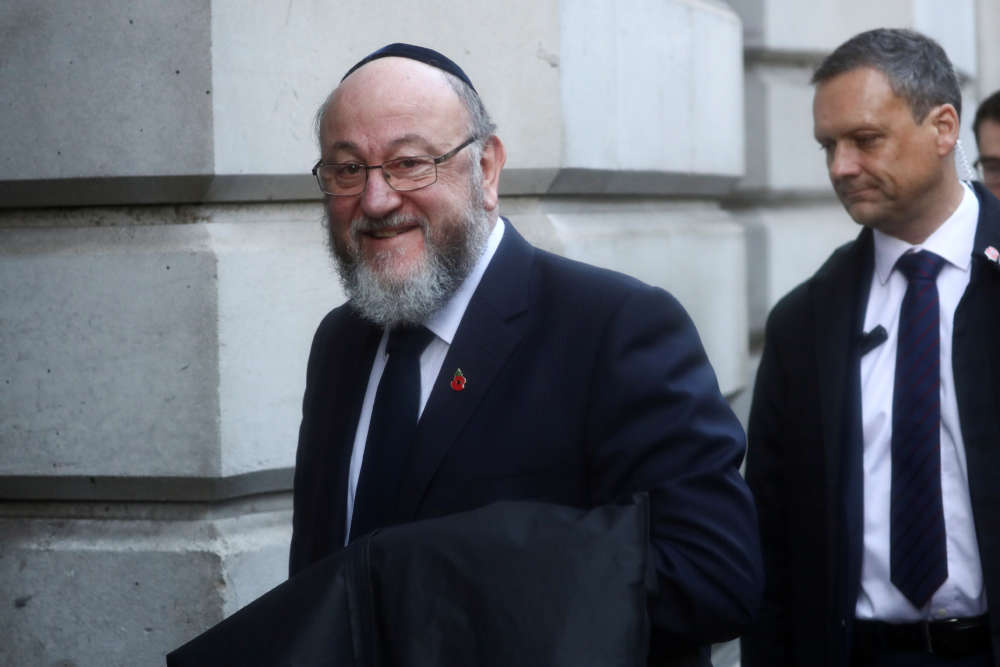 Britain’s chief rabbi said opposition Labour leader Jeremy Corbyn was unfit to be prime minister because he had failed to stem anti-Semitism “sanctioned from the top” and now gripping his party.

His comments stirred up campaigning ahead of a Dec. 12 election in which the United Kingdom faces a stark choice between Prime Minister Boris Johnson, promising to complete Britain’s departure from the EU, and Corbyn, proposing a radical socialist vision for the world’s fifth largest economy.

Chief Rabbi Ephraim Mirvis, in an article in The Times newspaper, questioned how complicit in prejudice an opposition leader would have to be to be considered unfit for office.

“It is a failure of leadership. A new poison – sanctioned from the top – has taken root in the Labour Party,” wrote Mirvis, of the United Hebrew Congregations of the Commonwealth.

“Be in no doubt, the very soul of our nation is at stake.”

Such an intervention from a religious leader is unusual, though it is unclear what impact it might have on the election. Anglican leader Justin Welby said it was unprecedented and indicated the fear felt by many Jews.

Ever since Corbyn, a veteran campaigner for Palestinian rights, shocked the establishment by becoming Labour leader in 2015, he has been dogged by criticism from some members, lawmakers and Jewish leaders that he has failed to tackle anti-Semitism from elements within its ranks.

In a speech at the presentation of Labour’s “race and faith” manifesto, Corbyn strongly condemned anti-Semitism in any form.

“Anti-Semitism in any form is vile and wrong,” Corbyn said at the Bernie Grant Arts Centre in north London.

“There is no place, whatsoever for anti-Semitism in any shape or form or in any place whatsoever in modern Britain, and under a Labour government it will not be tolerated in any form, whatsoever, I want to make that clear,” he said.

Nine of Corbyn’s lawmakers quit the party in February, citing the leadership’s handling of the anti-Semitism accusations among their reasons, and in May Britain’s equality watchdog launched an investigation into possible discrimination by Labour.

Mirvis said the Labour leadership’s response as its supporters drove lawmakers, members and staff out of the party for challenging anti-Jewish racism had been “utterly inadequate”.

Corbyn has also been criticised for the party’s delay in fully adopting the International Holocaust Remembrance Alliance’s definition of anti-Semitism.

Alfred Dubs, who escaped from the Nazis in Czechoslovakia as a child in 1939, said Labour should have acted quicker on anti-Semitism, but that Mirvis’s attack on Labour and Corbyn was “unjustified and unfair”.

“I am bitterly bitterly disappointed that he’s done that,” said Dubs, speaking before Corbyn at the event in London.

Johnson said it was a “serious business” when the chief rabbi criticised the opposition leader.

“I’ve never known anything like it and clearly it is a failure of leadership on the part of the Labour leader that he has not been able to stamp out this virus in the Labour Party,” Johnson said at a campaign event in Scotland.

With just over two weeks until the election, a poll by Kantar showed Labour had squeezed the Conservative lead to 11 percentage points, from 18 over the last week, putting Johnson’s party on 43% and the opposition on 32%.