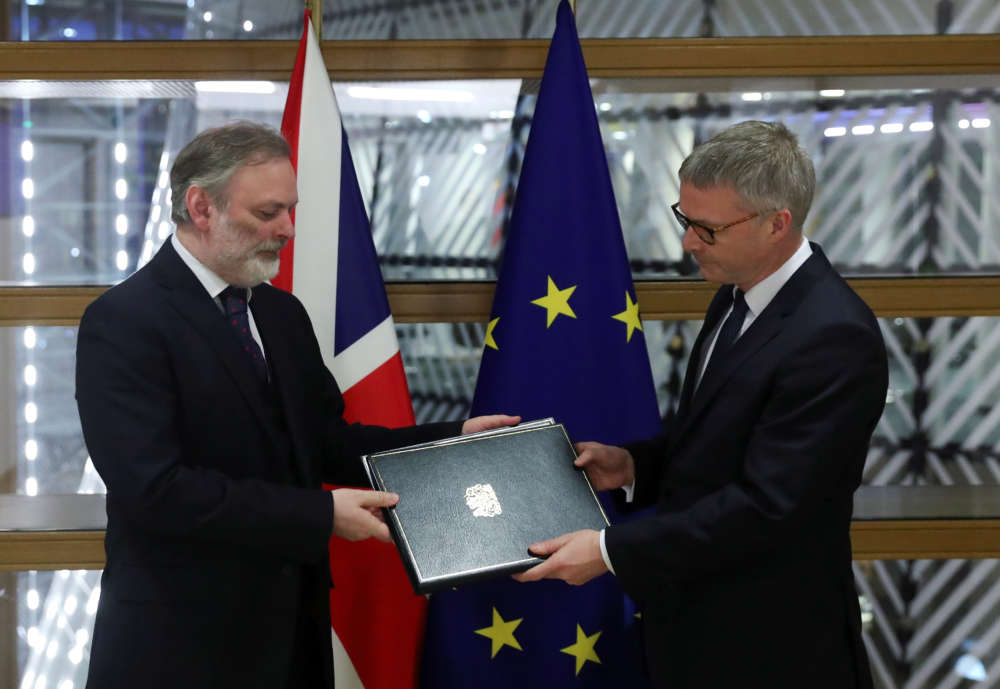 Britain’s ambassador to the European Union passed documents formalising Brexit to a senior EU official on Wednesday, hours before European lawmakers are due to sign off on a deal that will see Britain finally quit the bloc on Friday.

Three-and-a-half years after Britons voted to leave, a smiling Tim Barrow handed over a dark blue leather file embossed with the emblem of the United Kingdom, against a backdrop of British and EU flags at the bloc’s Brussels headquarters.

The European Parliament is due to give its final consent to the EU-UK Brexit deal at 1700 GMT, after which lawmakers will throw an “Au Revoir” party for their 73 departing colleagues.

After protracted and often tortuous divorce talks, the UK will leave the club it joined in 1973 at midnight Brussels time (2300 GMT) on Friday, when British flags will be removed from EU offices and the EU flag lowered on the British premises there.

On his last working day as a member of the European Parliament, leading Brexit campaigner Nigel Farage told reporters there was “no going back” once the UK leaves.

“The UK didn’t fit, we’d be better off out,” he said, describing euroscepticism as a settled view in the UK, where the 2016 referendum was won by a narrow 52 to 48 percent margin.

While Farage was beaming, his compatriot Jude Kirton-Darling, a socialist member of the Parliament, held back tears.

“It’s probably the saddest day of my life so far. Brexit is something that attacks the very foundation of our identity,” said Kirton-Darling, who plans to stay in Brussels with her Belgian husband.

She wore a red-and-blue scarf with EU and British flags on it and a caption reading “Always United”.

Barrow will become Britain’s foreign ambassador to the EU and the UK’s Permanent Representation, or UKRep, will become a foreign mission — already dubbed “UKmissEU” by some.

With just 11 months left of a status-quo transition period designed to smooth the Brexit process, fresh negotiations will begin soon on a new relationship — covering everything from trade to security — between the two sides.