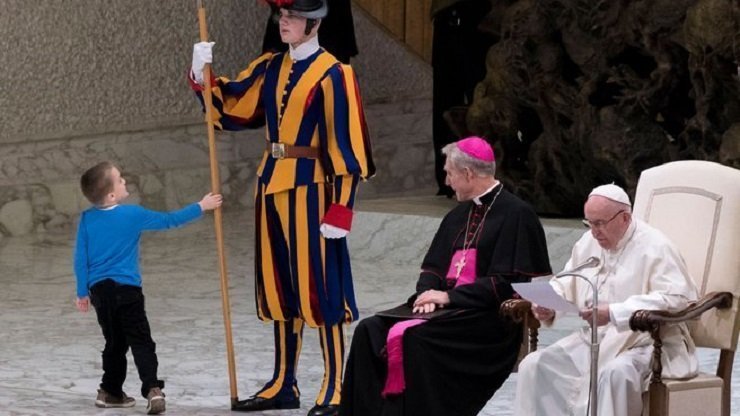 A six year old boy interrupted Pope Francis while he was addressing the crowd on Wednesday in the Vatican.

As the pontiff was solemnly reading out his catechism lesson in the Vatican audience hall, a boy broke through security, climbed on the stage and pulled the sleeve of a Swiss guard, just metres away from where the Pope was sitting.

Unfazed, the 81-year-old Pope continued reading as Wenzel danced and played around the stage.

The boy’s mother soon tried to fetch him, explaining to Francis that he is disabled and can’t speak.

Francis surprised everyone when he told her “Let him be, let him be” and allowed Wenzel to keep playing.

“That boy cannot speak, he is mute,” the Pope addressed the crowd. “But he does know how to communicate, how to express himself. And he has something that makes me think. He is free. Undisciplined-ly free … but he is free.”

“When Jesus says we have to be like children, it means we need to have the freedom that a child has before his father. I think this child preaches to all of us. And let us ask for the grace of speech.”