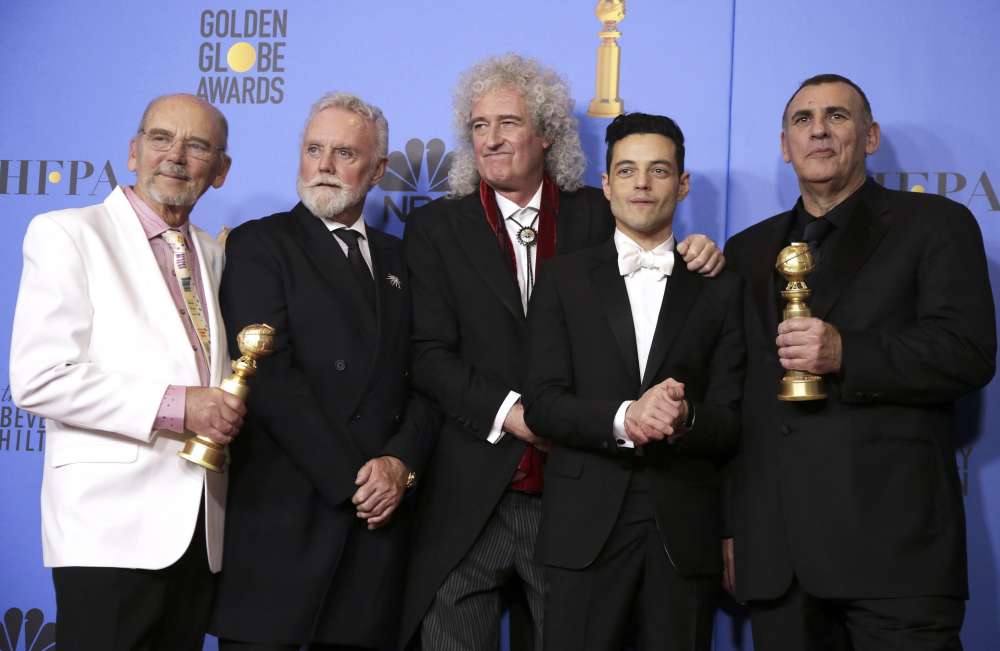 Queen musical “Bohemian Rhapsody” and U.S. segregation-era comedy “Green Book” took home the top Golden Globes on Sunday on a night of upsets that saw presumed favourite “A Star is Born” largely shut out, and big wins for Netflix.

“Oh my God. I just don’t believe it,” a tearful Close said of her win, before issuing a rallying cry to women to seek fulfillment in their careers.

“We have to say, I can do that, and I should be allowed to do that,” the 71-year-old said, to huge applause from the gathering of A-list stars.

Streaming service Netflix, which has upended Hollywood by spending billions on original programming, won five Golden Globes across movies and television, including best foreign language film “Roma.” The Mexican movie, which also took the prize for best director, is seen as an Oscar frontrunner in February.

Rami Malek, who won best drama actor for his role as late Queen frontman Freddie Mercury in 20th Century Fox film “Bohemian Rhapsody,” dedicated his award to the British singer, who died of AIDS in 1991.

“I love you, you beautiful man. This is for you, and because of you, gorgeous,” Malek said.

“Vice,” a scathing political comedy about the rise to power of former U.S. Vice President Dick Cheney, went into Sunday’s ceremony with a leading six nominations but emerged with just one win, for Christian Bale for his performance as Cheney.

“This is beyond anything we ever imagined when we began shooting,” said director and writer Peter Farrelly. He said the story of the black pianist who strikes up a friendship with his Italian-American driver gave him hope.

“I wanted to share that hope with you because we are still living in divided times,” Farrelly said.

Co-host Sandra Oh, who was born in Canada of Asian descent, paid tribute to the slew of Golden Globe-nominated films and TV shows featuring black and Asian actors and directors, including “Crazy Rich Asians,” “Black Panther,” and “BlacKkKlansman.”

“I wanted to be here to look out into this audience and witness this moment of change,” Oh said. “Right now this moment is real. Because I see you … all these faces of change. And now so will everyone else.”

It was a good night for Oh, who as well as co-hosting her first Golden Globe ceremony was named best television drama actress for BBC America thriller “Killing Eve.”

Lady Gaga, whose role in Warner Bros “A Star is Born” was her first lead part after a successful music career, won best original song for “Shallow.”

British actress Olivia Coleman was a winner for bawdy historical romp “The Favourite.”

In television, the big winners were Cold War spy thriller “The Americans,” limited series “The Assassination of Gianni Versace,” and new Netflix comedy “The Kominsky Method.”