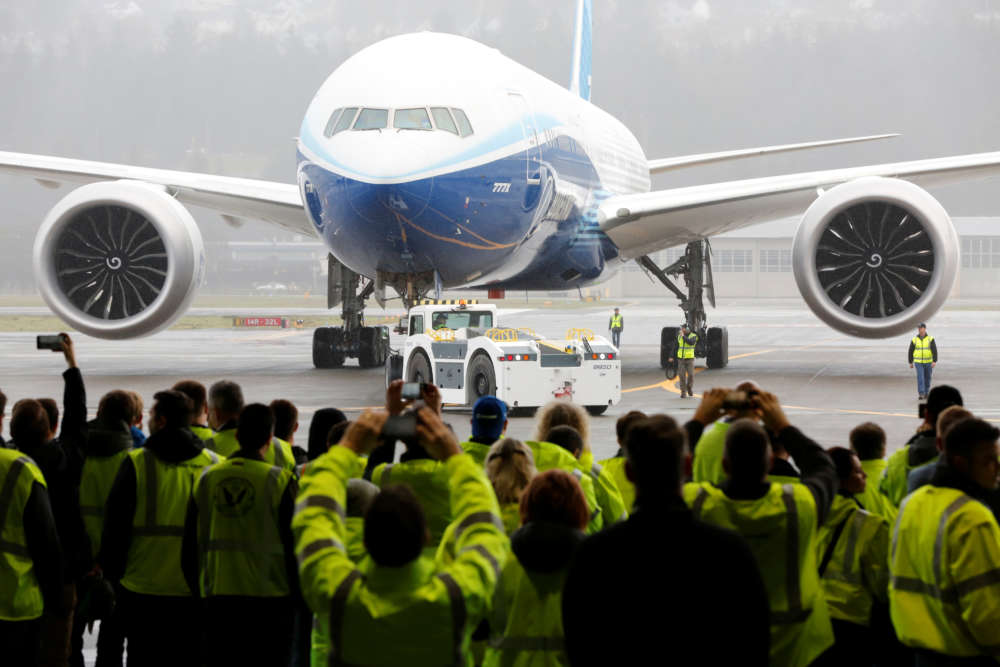 Boeing Co successfully staged the first flight of the world’s largest twin-engined jetliner on Saturday in a respite from the crisis over its smallest model, the grounded 737 MAX.

The 777X, a larger version of the 777 mini-jumbo, touched down at the historic Boeing Field outside Seattle at 2 pm (2200 GMT) after a debut which began almost four hours earlier at Boeing’s revamped wide-body assembly lines north of the city.

The decision to take advantage of a gap in clouds to start the months of testing needed before the jet can carry passengers came after two attempts had to be postponed due to high winds.

As the 252-foot-long aircraft – the longest commercial jet by a whisker – drew to a halt before waiting VIPs, rows of undelivered 737 MAX stood idle nearby in a reminder of the crisis that has engulfed Boeing since it was grounded last year.

“It made all of our employees proud one more time of who we are and what we get to do, by flying a brand new airplane that is going to change the world one more time,” Deal said.

The aircraft is the larger of two versions planned by Boeing and will officially be called 777-9, but is better known under its development codename, 777X.

Hallmarks include folding wingtips – designed to allow its carbon wings to fit the same parking bays as earlier models – and the world’s largest commercial engines from General Electric , wide enough to swallow a 737 MAX fuselage.

While eyeing hundreds of sales this decade, Boeing’s new 406-seater must overcome hurdles from regulators and buyers.

The 777X will be the first major aircraft to be certified since the role of software flaws in two fatal 737 MAX crashes prompted accusations of cosy relations between Boeing and the Federal Aviation Administration and heralded tougher scrutiny.

The FAA has pledged to ensure the 777X review is conducted rigorously, while launch customer Emirates wants the plane to be put through “hell on Earth” during testing to ensure it is safe and meets performance expectations.

“We are going to follow the normal processes we always follow and work with the FAA and they are going to work hand-in-hand with us,” Craig Bomben told reporters.

“We took the time to get the airplane ready for flight test so I think we are going to march through flight tests successfully and quickly and get it certified to the FAA standards.”

The 777X is expected to enter service in 2021, a year later than originally scheduled because of development snags.

It will compete with the Airbus A350-1000 which seats about 360 passengers. Big twinjets are steadily displacing the older four-engined Boeing 747 and soon-to-be-axed Airbus A380.

Yet experts cite worries about wide-body demand due to overcapacity and economic weakness. Airlines cancelled more than twice as many big jets as they ordered last year, according to Rob Morris, consultancy chief at UK-based Ascend by Cirium.

While Boeing says it has sold 309 777X – worth $442 million each at list prices – many in the industry have questioned its dependence on Middle East carriers who are scaling back orders.

“Longer-term, they’ll need more than those guys for that airplane. They’ll need the big network carriers to find routes that it works on,” said Aengus Kelly, chief executive of leasing giant AerCap.