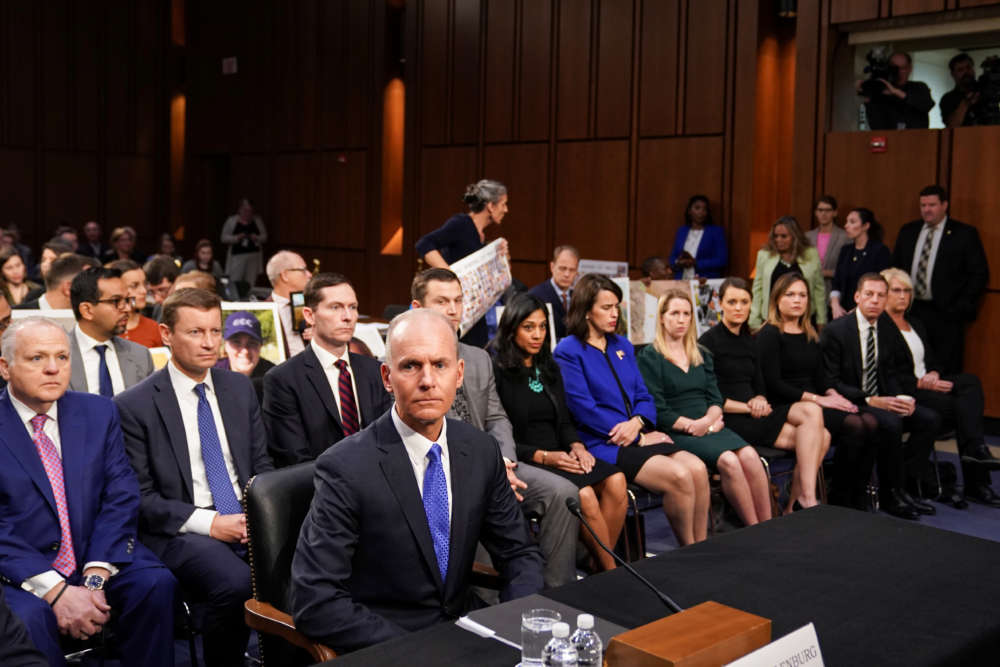 Boeing Co Chief Executive Dennis Muilenburg was pressed by U.S. lawmakers at a hearing on Tuesday over what the company knew about its MCAS stall-prevention system linked to two deadly crashes, and about delays in turning over internal 2016 messages that described erratic behaviour of the software in a simulator.

In an appearance that began early morning before the Senate Commerce Committee, Muilenburg acknowledged errors.

“We’ve made mistakes and we got some things wrong. We’re improving and we’re learning,” he said.

Asked ahead of the hearing if he would resign, Muilenburg said that was “not where my focus is.” He also declined to say if he or the board were considering his resignation after the plane returns to service.

For months, Boeing had largely not acknowledged blame and, instead, vowed to make a “safe plane safer.” Tuesday’s hearing represents Boeing’s broadest acceptance of responsibility that it made mistakes, though Muilenburg’s written testimony ahead of the hearing did not describe in detail what those mistakes were.

Senator Roger Wicker, the committee chairman, questioned Muilenburg over the company’s delay in releasing internal messages, first published by Reuters. In those messages, a former test pilot described erratic behaviour of a simulator version of the same software now linked to the deadly crashes, and also mentioned “Jedi-mind tricking” regulators over training requirements.

Wicker said those messages revealed a “disturbing level of casualness and flippancy.”

Muilenburg said he apologized to the FAA Administrator for the delay in turning over the messages, and said additional documents would likely be provided over time.

“We will cooperate fully,” Muilenburg added.

In his opening remarks, Muilenburg walked the committee through software upgrades to limit the authority of the stall-prevention system, known as MCAS, that has been linked to both crashes, as well as changes to improve safety oversight and transparency inside the company.

Later, Senator Maria Cantwell grilled Muilenburg and John Hamilton, a senior engineering executive, over the extent of testing on the MCAS system.

Boeing ran full-page advertisements in major newspapers expressing condolences to the families and loved ones of those killed in the crashes on Tuesday.

“These two accidents occurred on my watch and I have a keen sense of responsibility,” Muilenburg, who was stripped of his title as Boeing chairman by the board earlier this month, told reporters.

Family members, holding photos of victims of the crash, were seated just three rows behind Muilenburg during his testimony.

Wicker addressed the families, saying: “I promise to their loved ones that we will find out what went wrong and work to prevent future tragedies.”

On Monday, Muilenburg visited the Indonesian Embassy in Washington to meet with the ambassador and “pay our respects to those lost aboard Lion Air flight 610 on the first anniversary of the accident,” Boeing said in a statement.

Muilenburg will also testify before the U.S. House of Representatives Transportation and Infrastructure Committee on Wednesday.

Michael Stumo, the father of Samya Rose Stumo, who died in the Ethiopian Airlines Flight 302 crash in March, said on Monday the victims’ families would hold up photos of the “loved ones we lost” to “make sure the focus is on that, rather than political or bureaucratic or engineering issues.”

He questioned why Boeing was only now adding safeguards to a flight control system known as MCAS that investigators have linked to both crashes.

“When you knew the MCAS system was part of that Lion Air crash, why didn’t you act to correct it immediately instead of still withholding information about it and blaming the pilots?” Stumo said of Boeing.

U.S. airlines have cancelled flights into January and February because of the grounding, and the Federal Aviation Administration is not expected to approve the 737 MAX’s ungrounding until December at the earliest.

In March, after the Ethiopian Airlines crash, the plane was grounded worldwide.

Indonesian investigators reported on Friday that Boeing, acting without adequate oversight from U.S. regulators, failed to grasp risks in the design of cockpit software on the 737 MAX, sowing the seeds for the Oct. 29, 2018, Lion Air 610 crash, which also involved errors by airline workers and crew.

Muilenburg added that “regulators should approve the return of the MAX to the skies only after they have applied the most rigorous scrutiny, and are completely satisfied as to the plane’s safety. The flying public deserves nothing less.”