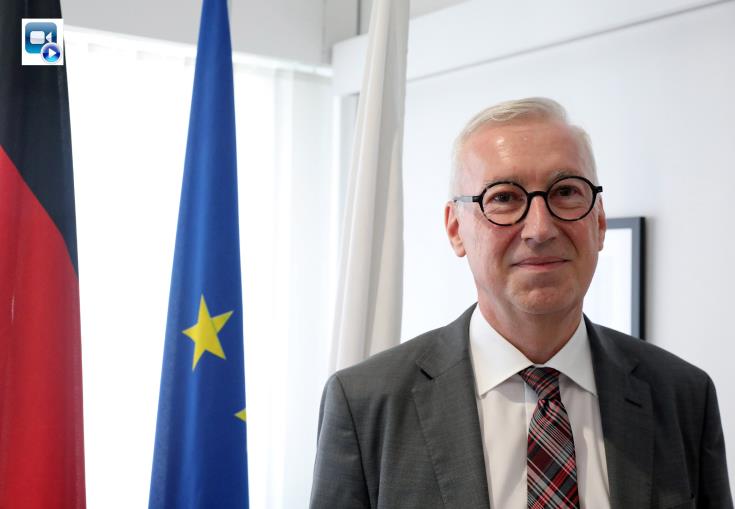 Berlin intends to be supportive if asked to do so by all parties involved in Cyprus settlement efforts, says the Ambassador of Germany to Cyprus, Franz Josef Kremp.

If there is another request, like the informal leaders’ meeting with the UN Secretary-General, which was hosted last November in the German capital, there will be a “very positive response” from the German government, the Ambassador notes in an interview with the Cyprus News Agency.

As Germany assumes on July 1 the six-monthly rotating presidency of the Council of the European Union, the Ambassador highlights his country’s EU priorities, shaped by the coronavirus pandemic and expresses optimism that the German EU Presidency will be able to reach a compromise among member states on the next Multiannual Financial Framework (MFF) and the Recovery Fund.

With Germany lifting traveling restrictions for EU member states and holidaymakers looking for safe summer destinations, the Ambassador also says that he sees no hindrance for his fellow citizens to choose Cyprus as their holiday destination. His choice for the summer is Cyprus, because, as he says, the safest thing is “to stay at home and this is my home now.”

Asked about Germany’s position on the issue of illegal Turkish drilling activities in the exclusive economic zone of Cyprus, the Ambassador says that “Berlin always made it clear that we support Cyprus, we show our full solidarity.”

He points to the relevant Foreign Affairs Council and European Council Conclusions, where member states unanimously declare their solidarity with Cyprus, while asking Turkey to respect the sovereign rights and the sovereignty of Cyprus, refrain from illegal measures, and exercise restraint. Member states also ask that a solution is found peacefully and that a climate is created, that is conducive to sit around the table and find solutions, he adds and notes that “the European Union has also taken measures.”

His opinion on remarks that EU sanctions against Turkey do not go far enough is that “things are discussed amongst all member states and there are sometimes different opinions as to the efficiency of certain measures that are proposed.” One has to sit around and see where common ground can be found; he adds.

The Ambassador also says that EU sanctions against Turkey cannot be compared with the case of Crimea. The annexation of Crimea is a unique case and the Cyprus problem is a very different issue, he says, noting the different points of view between the Turkish Cypriot community and the Greek Cypriot community. He goes on to say that there have been discussions for many years about natural resources, and how they are divided between the communities.

“We are in a different field, so I could not encourage comparing A with B because they are not comparable,” he says.

Germany hosted last November an informal meeting between the President of Cyprus Nicos Anastasiades, the Turkish Cypriot leader Mustafa Akinci and the UN Secretary-General Antonio Guterres, to discuss efforts towards reaching a consensus starting-point for meaningful, results-oriented negotiations, leading to a settlement.

“We were very happy and, in a way, honored that we could host the meeting in Berlin and we have reiterated in the past and we do it always that we want to be of course supportive, if that is wished and desired by all parties concerned” the German Ambassador says. We are willing to help and to assist and if there is another request, like the Berlin meeting, I am sure that we will get a very positive response from the side of my government, he notes.

Asked about the prospects for the resumption of Cyprus talks, the Ambassador replies that the decisive point is “what the Cypriots want and how they perceive the way forward.” He points to the upcoming electoral cycle in Cyprus and says that “we have to see what influence the upcoming elections have on the peace process and the solution process.”

The process to elect the Turkish Cypriot leader, scheduled for last April, was eventually postponed for October due to the outbreak of COVID-19. In the Republic of Cyprus, parliamentary elections are due in May 2021.

Education for a Culture of Peace is an area where Germany places particular emphasis on and the Federal Foreign Office of the Republic of Germany has been funding the ‘Imagine’ educational programme in Cyprus since 2017. ‘Imagine’ runs under the auspices of the Technical Committee on Education and is being implemented by the Association for Historical Dialogue and Research (AHDR) and the Home for Cooperation (H4C) with the support of the UN Peacekeeping Force in Cyprus.

If you look at our history, it is no surprise that we are engaged in peace education, says Ambassador Kremp. “Bringing people together is already the first step to trust building and peace building. So, it is something we strongly support” he adds. “We are very supportive to this programme and we wish that it is long-lasting, because education is a long-lasting effort,” he says and notes the support President Anastasiades and Turkish Cypriot leader Akinci lent to this initiative last December. Interest in this programme is growing rapidly among teachers and schools across the island and there is a lot more to do, “but we are already happy with the first steps,” he adds.

On July 1, Germany will assume the Presidency of the Council of the EU. As the Ambassador says, the pandemic has changed Germany’s EU priorities fundamentally. “Of course, now we have to overcome jointly the pandemic and the result of the pandemic. We have to coordinate European efforts to fight the pandemic,” he says, adding that European recovery is the second priority.

“This means that we have to have the MFF and the Recovery Fund in place,” Kremp adds. Other priorities, he says, include the final negotiations concerning the future EU relationship with the UK, migration, digitalization, a Green Europe, as well as a strengthened Europe in the world. Concerning the latter, the Ambassador says that if Europe wants to play a role on the global stage, along the US or China, it has to act together.

Asked about efforts to reach a compromise on the Multiannual Financial Framework and the Recovery Fund during the German EU Presidency term, Ambassador Kremp says that he is optimistic. Discussions on this matter have never been easy, but with a willingness to compromise and with an approach of solidarity, he says that EU partners will be able to reach a solution. “The German Presidency is very ambitious and would like to have an agreement by the heads of state and government in July,” he notes. This would open the way for the European Parliament and subsequently for national parliaments to approve the deal “so that we have in time, well before the end of the year, a new MFF as well as a Recovery Fund.”

Asked if the German Presidency of the EU Council can strike the right balance among member states, he says that “we will try our very best, but Germany cannot do it alone.” Despite the different views that were expressed in the past, the Ambassador hopes that in the end, everybody will be willing to compromise and to support a solution that will be beneficial for all. As the German Chancellor Angela Merkel said, large bridges have to be built, but the Chancellor is very experienced, and “I think we can be confident that she will be able to strike a comprise” in the end, the Ambassador remarks.

Franz Josef Kremp also notes that it is high time for the EU to overhaul its internal EU asylum rules. The issue of migration has kept us busy for quite a while and will do so in the future, he says “so, it is necessary that we find a sustainable solution” with a fair burden sharing between all member states. The German senior diplomat also notes that there are several proposals on the table concerning an adjustment of the Dublin Regulation. “So far, a compromise acceptable to all member states has not been achieved. We will try during our Presidency, if not to find a solution, at least to make big progress towards a solution,” he adds.

Asked about Ankara’s role, Ambassador Kremp says that Turkey hosts approximately 3.6 million Syrian refugees “and I think it deserves our full support to face that challenge.” “The other thing is whether you can use refugees as a means to put pressure, to influence,” he goes on and says that “Europe has made it clear on several occasions that it will not be pressured by threats”. This will not be accepted, and it will not be successful, he adds.

The Ambassador also says that the EU needs to pay attention to its neighborhood, listing a number of regional hotspots, such as the Middle East, Syria, Iran, Iraq, but also North Africa, Libya and the Sahel. “It is in our common European interest that we pay attention” to this region, where most of the migratory flows originate, he says. “We have to stabilize this region, we have to help them make economic progress, we have to assist in reducing tension” the Ambassador adds. He also points to the January 2020 Berlin Conference on Libya and notes that implementing the principles agreed there remains a focus.

“No hindrance for Germans holidaymakers to come to Cyprus”
——————————————————-
Germany is listed in Cyprus’ Category A countries, which means that passengers arriving to the island are not required to present a negative COVID-19 test. Authorities may however perform random tests on passengers and the list is up for constant review. “What we didn’t know and was not communicated unfortunately, is that they also do tests on whole aircrafts,” the Ambassador remarks. “We had two aircraft coming in last week, where they tested everybody on board. We will see how that develops,” he says.

German authorities were alerted recently after detecting hundreds of new COVID-19 cases at slaughterhouses in North Rhine-Westphalia but responded quickly to isolate those affected and contain the spread of the virus. The Ambassador says that this is a locally concentrated incident and measures taken by local and regional authorities are effective. Otherwise the figures in Germany are good and he does not see any indication that they will worsen, he adds. “It is up to the government of Cyprus to decide whether we stay in Category A” says the Ambassador.

He adds that Germans can travel freely within the EU and they can choose where to spend their holidays. “Cyprus certainly has very good figures. The government has taken clear and decisive action and has developed comprehensive strategies for safe holidays on the island. “From that point of view there is no hindrance why Germans should not come to this island” he says. Ambassador Kremp says that most probably, he is also vacationing this summer in Cyprus. “You never know when you leave an island whether you can come back again” as the situation may change while you are away, he says. “So, it is the safest thing to stay at home, and this is my home now,” he concludes.

By In Cyprus
Previous articleWeber: EU will not be blackmailed by Turkey on Cyprus
Next articleFire service rescues swimmer stranded on rocks