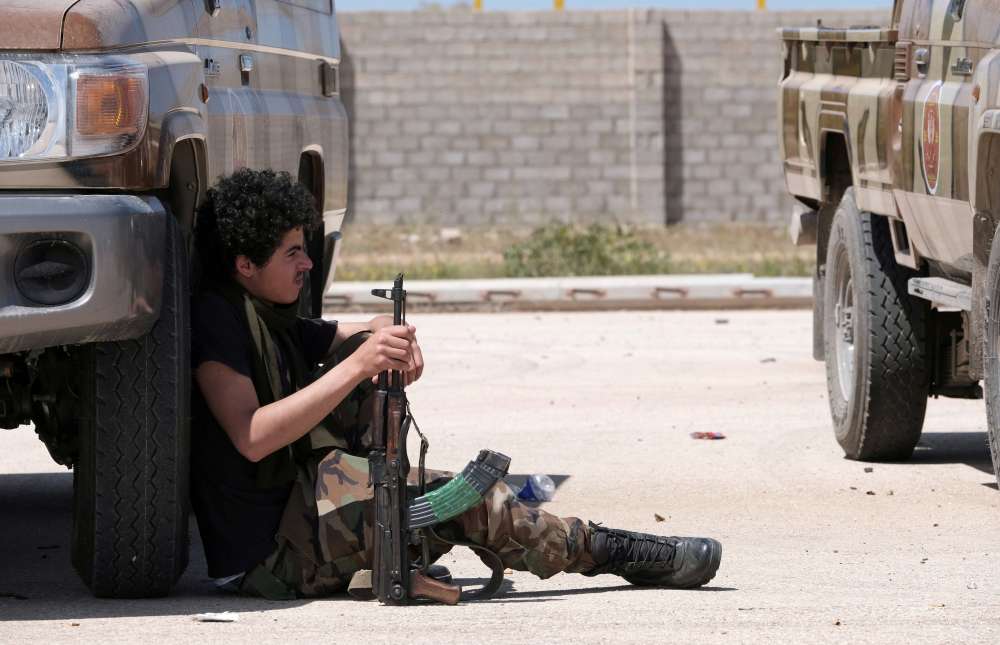 Eastern Libyan forces tried to push towards the centre of Tripoli on Monday after their easy desert advance hit a tougher urban phase, with deaths and displacements mounting despite Western appeals for a truce and a return to a peace plan.

The eastern Libyan National Army (LNA) forces of Khalifa Haftar, a former officer in Gaddafi’s army, said 19 of their soldiers had died in recent days as they closed in on the internationally recognised government in Tripoli.

The United Nations said 2,800 people had been displaced by clashes and many more could flee, though some were trapped.

The LNA has conducted air strikes on the south of the city as it seeks to advance into the centre from a disused airport.

But the government of Prime Minister Fayez al-Serraj has armed groups arriving from nearby Misrata to help block the LNA.

It reported 11 deaths without saying on which side.

Al-Serraj, 59, who comes from a wealthy business family, has run the Tripoli government since 2016 as part of a U.N.-brokered deal boycotted by Haftar.

His LNA, allied with a parallel eastern administration based in Benghazi, took the oil-rich south of Libya earlier this year before its surprisingly fast push towards the coastal capital.

While that advance was straightforward through sparsely populated areas, taking Tripoli is a far bigger challenge.

The violence has thrown into disarray a U.N. plan for an April 14-16 conference to plan elections as a way out of the anarchy that has gripped Libya since the Western-backed toppling of Gaddafi eight years ago.

The European Union joined the United Nations, United States and G7 bloc in calling for a ceasefire, a halt to Haftar’s advance and return to political negotiations.

A contingent of U.S. forces evacuated at the weekend.

The U.N. mission to Libya called on Sunday for a truce for two hours in southern Tripoli to evacuate civilians and wounded, but it did not appear to have been heeded.

Haftar casts himself as a foe of extremism but is viewed by opponents as a new dictator in the mould of Gaddafi, whose four-decade rule saw torture, disappearances and assassinations.

Forces with the Tripoli government have announced an operation to defend the capital called “Volcano of Anger”.

Allied groups from Misrata along the coast have been moving pickup trucks fitted with machine guns into Tripoli.

The LNA says it has 85,000 men, but this includes soldiers paid by the central government that it hopes to inherit. Its elite force, Saiqa (Lightning), numbers some 3,500, while Haftar’s sons also have well-equipped troops, LNA sources say.

Since NATO-backed rebels ousted Gaddafi, Libya has been a transit point for hundreds of thousands of migrants trekking across the Sahara in hope of reaching Europe across the sea.

Islamic State staged some high profile attacks in Tripoli last year, but the militant group has largely retreated to the desert of southern Libya since the loss of its former stronghold in Sirte late in 2016.

France, which has close links to Haftar, said it had no prior warning of his push for Tripoli and denied it was secretly undermining the peace process, a diplomatic source said.

France established close relations with Haftar under the Socialist government of Francois Hollande and his defence minister Jean-Yves Le Drian.

When President Emmanuel Macron named Le Drian his foreign minister, Paris doubled down in its support to Haftar, in close alignment with Egypt and the United Arab Emirates, which see him as a bulwark against Islamists and have supported him militarily, according to U.N. reports.

France’s stance has created tensions with Italy, which has sought to play a leading role to end the turmoil, which has allowed Islamist militants and migrant smugglers to flourish.