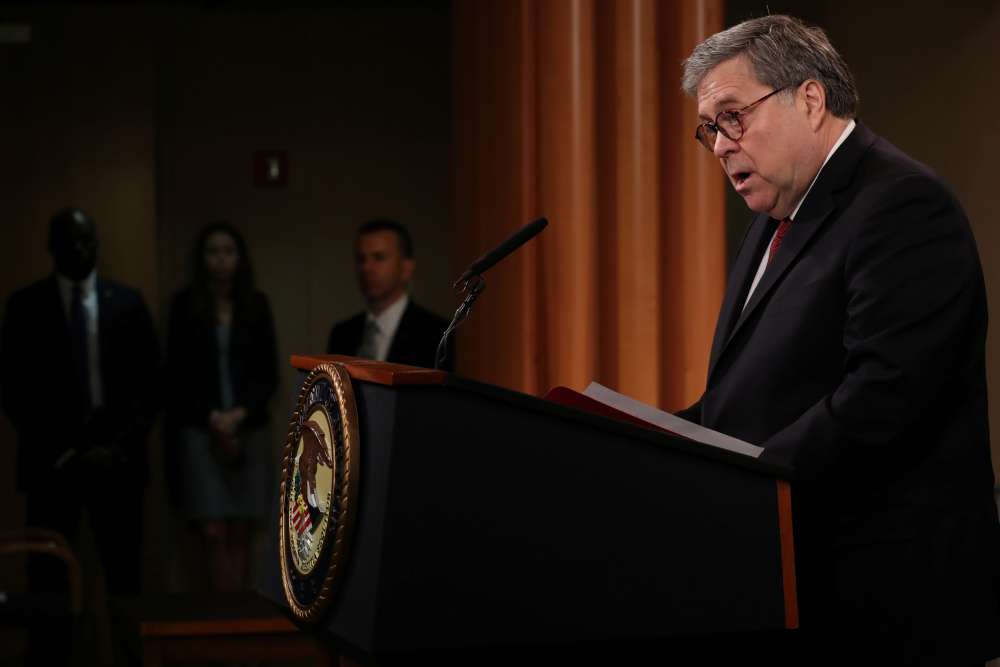 U.S. Attorney General William Barr on Thursday offered a spirited defence of President Donald Trump ahead of the release of Special Counsel Robert Mueller’s report on Russia’s role in the 2016 U.S. election, emphasising that it found no collusion between Trump’s campaign and Moscow.

Barr, the top U.S. law enforcement official and a Trump appointee, gave a news conference at the Justice Department as he sought to shape the narrative on a watershed day in Trump’s tumultuous presidency.

“President Trump faced an unprecedented situation. As he entered into office and sought to perform his responsibilities as president, federal agents and prosecutors were scrutinising his conduct before and after taking office and the conduct of some of his associates,” Barr said.

“At the same time, there was relentless speculation in the news media about the president’s personal culpability. Yet, as he said from the beginning, there was in fact no collusion,” added Barr, one of handful of people to have seen the report.

The report’s disclosure, with portions expected to be blacked out by Barr to protect some sensitive information, is certain to launch a new political fight in Congress and on the 2020 presidential campaign trail, as Trump seeks re-election in a deeply divided country.

Moments after Barr concluded his news conference, Trump posted an image of himself on Twitter surrounded by fog with the words: “No collusion. No obstruction. For the haters and the radical left Democrats – GAME OVER.”

Barr said Trump’s personal lawyers “were given the opportunity to read a final version of the redacted report before it was publicly released,” a revelation certain to infuriate congressional Democrats.

Wall Street took Barr’s comments in stride, with the S&P 500 holding slight gains during the news conference then slipping into negative territory after it ended.

“The Russian government sought to interfere in our election process but thanks to the special counsel’s thorough investigation, we now know that the Russian operatives who perpetrated these schemes did not have the cooperation of President Trump or the Trump campaign,” Barr said.

The report promises to provide new details about some of the biggest questions in the investigation, including the extent and nature of his campaign’s interactions with Russia and actions Trump may have taken to hinder the inquiry including his 2017 firing of FBI Director James Comey.

Mueller submitted the report to Barr on March 22. Two days later, Barr told lawmakers the inquiry did not establish that Trump’s 2016 campaign team engaged in a criminal conspiracy with Russia and that Mueller had not exonerated Trump of committing the crime of obstruction of justice. Barr subsequently concluded that Trump had not committed obstruction of justice.

The prospect of the Democratic-led House of Representatives beginning an impeachment process to remove Trump from office receded with the release of Mueller’s initial findings last month. The more detailed report to be made public on Thursday could provide fodder for some Democrats to renew the push to try the president for high crimes and misdemeanours but they are unlikely to be successful because Trump’s Republican Party controls the Senate, which would decide the president’s fate.

Asked why Mueller was not invited to take part in the news conference, Barr said that the special counsel was merely “required under the regulation to provide me with a confidential report. I’m here to discuss my response to that report and my decision, entirely discretionary, to make it public, since these reports are not supposed to be made public. That’s what I’m here to discuss,” Barr said.

Justice Department regulations give Barr broad authority to decide how much of the report to make public.

“That’s the bottom line. After nearly two years of investigations, thousands of subpoenas, hundreds of warrants and witness interviews, the special counsel confirmed that the Russian government sponsored efforts to illegally interfere in the 2016 presidential election but did not find that the Trump campaign or other Americans colluded in those efforts,” Barr said.

The release of the report may deepen an already bitter partisan rift between Trump’s fellow Republicans, most of whom have rallied around the president, and his Democratic critics, who will have to decide how hard to go after Trump as they prepare congressional investigations of his administration.

Democrats were furious that Barr held a news conference on the report before it was provided to Congress.

Copies of the report will be delivered to Congress between 11 a.m. and noon (1500-1600 GMT), a senior Justice Department official said. The delay in seeing the report sparked Democratic complaints that Barr, a Trump appointee, wanted to shape the public’s views during his news conference before others had a chance to draw their own conclusions.

By In Cyprus
Previous articleYEU Fundraising “Our Own Donkey”
Next articlePumping water from Mitsero mine shaft “impossible,” authorities say (video)