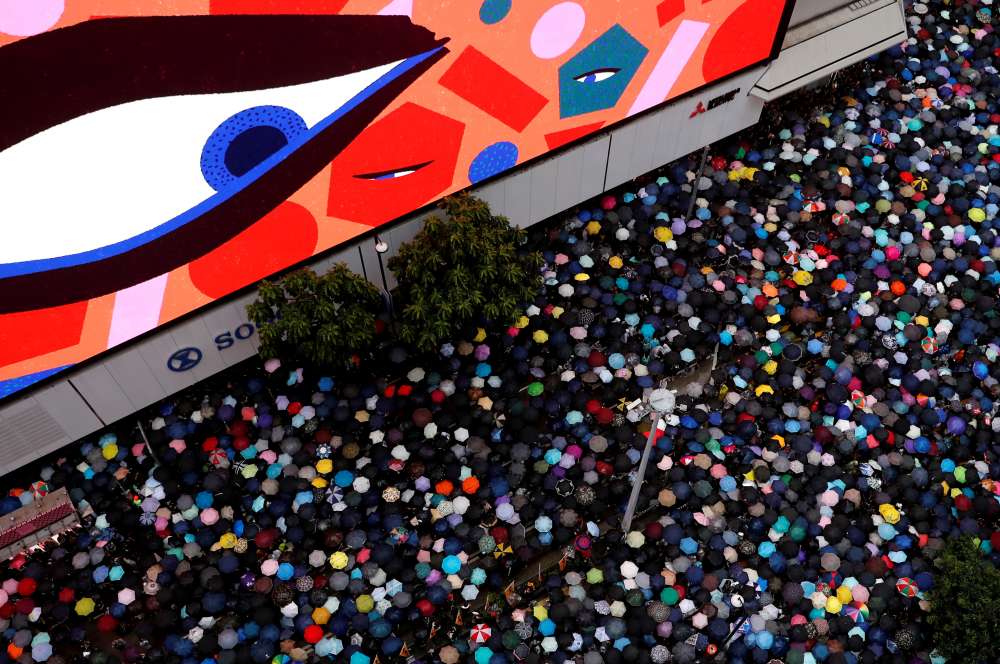 Hong Kong banks published full-page newspaper ads calling for law and order in the Chinese-ruled city and international jewellers sought the rescheduling of a huge trade fair as weeks of pro-democracy protests showed no sign of let-up on Thursday.

Thousands held a scrappy anti-government protest on Wednesday at a suburban subway station where demonstrators were attacked by a mob of white-shirted men last month. Protesters at the subway station on Wednesday were angry that nobody had yet been prosecuted for that violence.

Police said they charged two men with rioting on Thursday in connection with the attack. They will appear in court on Friday.

Wednesday’s standoff stopped short of recent intense clashes, including the storming of the legislature and occupation of the airport, with police refrained from using tear gas or attempting to storm protesters’ lines.

HSBC, Standard Chartered and Bank of East Asia all urged the restoration of order in the former British colony, which returned to Chinese rule in 1997.

Trade representatives of the world’s largest diamond trading centres, from Mumbai, Antwerp and Ramat Gan, asked the organiser of the Hong Kong Jewellery and Gem Fair to postpone the high-profile event, which typically welcomes more than 54,000 visitors.

The fair is due to be held in September at the Asia World Exposition centre and the Wan Chai Convention and Exhibition centre.

In a letter to organiser Informa Markets, the representatives said between 30% and 40% of exhibitors were demanding to pull out.

“In light of recent events, we urge Informa Markets to consider the following; rather than potentially risking an empty show in terms of both visitors and exhibitors, postpone the show to a later date – as yet to be determined – once Hong Kong is in a more stable climate,” the representatives wrote.

“Additionally, we request financial compensation in the form of a discount or refund for all participating companies.”

Anger erupted in Hong Kong in June over a now-suspended bill that would allow criminal suspects in Hong Kong to be extradited to mainland China for trial but have since grown into one of the biggest populist challenges faced by Chinese President Xi Jinping since he took power in 2012.

The unrest has been fuelled by broader worries about the erosion of freedoms guaranteed under the “one country, two systems” formula adopted after 1997 but not enjoyed on the mainland, including an independent judiciary and the right to protest.

Several anti-government demonstrations are planned in coming days and weeks, including a rally by high school students on Thursday and a “stress test” of the airport at the weekend.

The protests are already exacting a toll on Hong Kong’s economy and tourism, with the financial hub on the verge of its first recession in a decade.

Standard Chartered said in Thursday’s newspaper notices the bank supported the government in upholding social order and guarding “the status of Hong Kong as an international financial centre”.

HSBC said all parties must resolve disagreement through communication rather than violence. Neither HSBC nor Bank of East Asia referred to the government in their advertisements.

Hong Kong leader Carrie Lam reiterated on Tuesday that the extradition legislation was dead but has stopped short of officially withdrawing the bill, as protesters have demanded.

Demonstrators are also calling for an independent inquiry into the protests and perceived police brutality, a halt to descriptions of the protests as “rioting”, a waiver of charges against those arrested, and resumption of political reform.

Beijing has reacted sharply to the protests and accused foreign countries, including the United States, of fomenting unrest. China has also sent clear warning that forceful intervention is possible, with paramilitary forces holding drills in neighbouring Shenzhen.

China confirmed on Wednesday that a Chinese national working at Britain’s Hong Kong consulate has been detained in Shenzhen for violating the law, likely worsening already strained ties between Beijing and London.

U.S. President Donald Trump over the weekend warned against a crackdown in Hong Kong like Beijing’s suppression of pro-democracy protests in Tiananmen Square in 1989, which would make reaching a deal he has been seeking to end a trade war with China “very hard”.