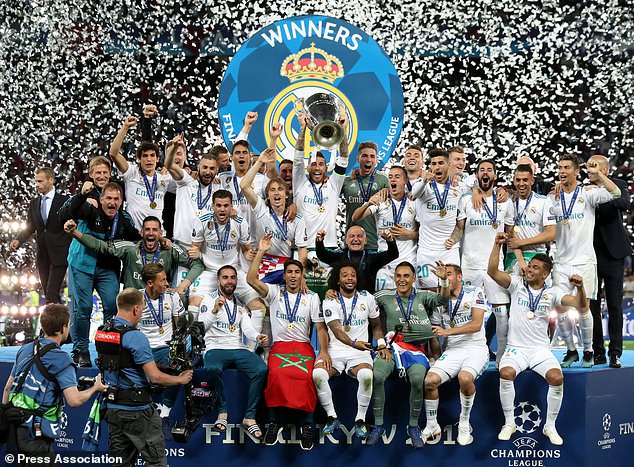 A sensational overhead strike from Real Madrid substitute Gareth Bale and two calamitous errors by Liverpool goalkeeper Loris Karius gave the Spanish side a third straight Champions League title with a 3-1 win in an incident-packed final on Saturday.

Welshman Bale came on just past the hour with the score at 1-1 and after three minutes produced an astonishing bicycle kick finish and then netted with a speculative long-range effort that somehow went through the hands of the unfortunate Karius.

The German keeper had earlier handed Real a 51st minute lead when he threw the ball straight at striker Karim Benzema and the ball rolled into the unguarded net off the Frenchman´s leg.

“Great emotions. To lift three Champions League trophies with this club, this team is magnificent,” said Real’s Zinedine Zidane, who became the first coach to win Europe’s top trophy in three consecutive years. “We don’t quite realise what we have achieved yet. We are going to enjoy the moment. ”

Liverpool, who crucially lost their leading scorer Mohamed Salah to a suspected dislocated shoulder in the 31st minute, had equalised in the 55th minute when Sadio Mane found the net from close range after Dejan Lovren headed the ball into the area.

In truth, though, despite their best efforts Liverpool never looked as much of a threat once Egyptian international Salah went down under a challenge from Real captain Sergio Ramos.

“We started well and played exactly like we wanted to,” said Liverpool manager Juergen Klopp, who has now lost his last six finals as a coach.

“The situation with Sergio Ramos (and Salah) looked really bad and it was a shock for the team, we lost the positive momentum and they immediately came up,” he said.

It was a night which confirmed Real’s ability to superbly manage the biggest of games.

Bale, who has not been first-choice at Real this season and whose future has been the subject of much speculation, was man of the match while 24-year-old Karius ended the night in tears as he lay flat out on the turf of the NSC Olympic Stadium.

Real have become the first team since Bayern Munich in 1976 to win Europe’s elite club trophy three years in a row. The Spaniards won five straight European Cup trophies in the 1950s.

Real’s fourth Champions League triumph in five years, and 13th European Cup success in total, was fully deserved despite Liverpool, the competition’s top scorers this season, making an aggressive start to the game in an electric atmosphere.

The English side attacked with intent and Trent Alexander-Arnold tested Navas with a low drive but Real looked in charge following the departure, in tears, of Salah.

Real had their own injury blow with right-back Dani Carvajal having to go off, replaced by Nacho in the 37th, and ended the half with Benzema’s effort being disallowed for offside after Cristiano Ronaldo´s header was saved by Karius.

France striker Benzema was to get compensation though when he was alert to Karius’s ill-advised attempt to throw the ball out quickly, although Real’s lead lasted just four minutes.

Liverpool’s Senegal forward Mane was sharp to react when Lovren rose to head the ball goalwards and their travelling fans sensed the Anfield side’s spirit could turn the game around.

But then came Bale, leaping to produce a jaw-dropping left-foot overhead volley from Marcelo’s cross before trying his luck with a speculative long-range shot that defied Karius’s ham-fisted attempt to keep it out and put the result beyond doubt.

In between Liverpool’s Senegal forward Mane hit the post from the edge of the area as Liverpool, lacking their usual attacking potency in the absence of Salah, continued to battle.

Ronaldo, who now has five Champions League winners medals, could have added a fourth goal for Real near the end but the Portugal forward was distracted as he burst goalwards when a fan ran onto the pitch before being stopped by security.

This time it was Bale who had grabbed all the headlines as Real and Zidane continued their continental dominance.

Another person has died and another 32 people tested positive for Covid-19 on Monday in the Republic of Cyprus, bringing the total number of...
Read more
Local

A Paphos doctor discharged from hospital where he was treated for Covid-19 has recounted his ordeal to Phileleftheros. With his harrowing testimony came an appeal...
Read more
Local

Measures for health professionals who are not in compliance

About 25-30% of health professionals are not at their posts in public hospitals among the Covid-19 pandemic either justifiably because they belong to vulnerable...
Read more
Local

A mother who had tested positive for coronavirus and her newborn baby boy are doing well, Dr Agathoclis Christofides, heads of obstetrics and gynaecology...
Read more
Economy

A government plan to guarantee up to €2bn in bank loans to businesses and self-employed people will be voted down by parliament, Phileleftheros reports. This...
Read more