Cycling and hiking in Cyprus are always better during Autumn mostly because of the weather and the beautiful colours of the season.
Below are the best cycling routes and natural trails for this time of the year, which you can use to exercise and at the same time enjoy the fresh air  with your loved ones. So, go out in the nature before the heavy rain and winter snow begins.

The small forest of Rizoelia is situated next to the roundabout on the outskirts of Larnaka (Larnaca), west of Aradippou village. There are plenty of dirt roads for mountain biking fans, as well as for those who love riding through beautiful forest, or want to enjoy the view from the top of the hill. 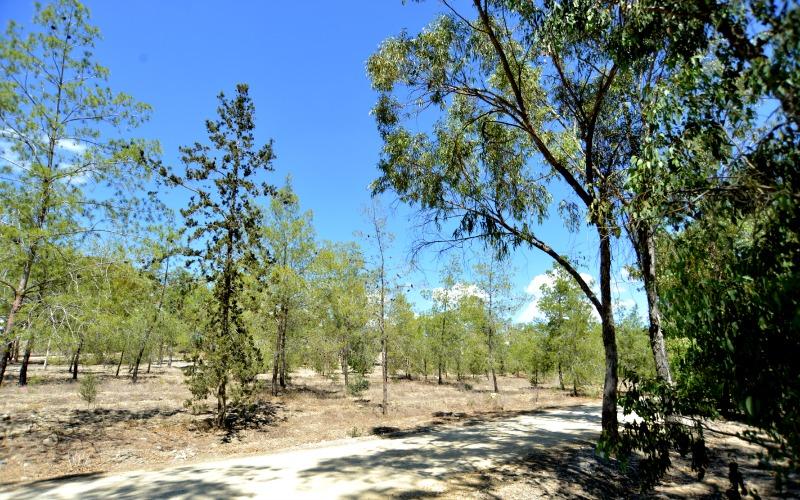 The route starts from Lefkosia (Agioi Trimithias) and follows the road to Agia Marina, passes by the Xyliatos Dam before it reaches the villages of Saranti and Spilia, from where it takes the alternative route towards Agios Theodoros.

At Agios Theodoros the route crosses the main Lefkosia -Troodos road and reaches Kato Flasou where it begins to climb southwards going alongside the Karkotis river, and passing through the villages of Evrychou, Tembria, Kaliana, Galata and Kakopetria.

Keeping on the Kakopetria – Prodromos road, the road starts to climb towards the Agios Nikolaos tis Stegis monastery until it reaches Prodromos where it takes a turning to the right leading to the area Marathasa and the villages of Pedoulas, Moutoullas,Kalopanagiotis and Oikos.

The Pedoulas – Linou road crosses the main Lefkosia-Troodos road and then heads in a northeasterly direction to the village of Koutrafas situated on the banks of the Elia river. The road then climbs towards the villages of Nikitari and Vyzakia, where it follows the same route back to Lefkosia via Agia Marina Xyliatou, Kato Moni, Meniko and Palaiometocho, ending up at the Agioi Trimithias.

An alternative route to the Koutrafas-Nikitari route, is to return to Lefkosia on the main Lefkosia -Troodos road where you can expect more traffic.

From Lythrodontas village you enter directly in the Machairas forest and after climbing a total of 915m you reach the Machairas monastery. From there the route heads west and passes through the small villages of Lazanias and Gourri, where the it turns south to Farmakas.

From Farmakas it heads southwest and descends towards the main Lefkosia – Palaichori road, with the Palaichori dam to the left. From there the road climbs to the left to go through Apliki, climbing steadily for 5km until it reaches Palaichori and from there you continue south towards the village of Agros which is located 13,9km from Palaichori.

Difficulty rate: Quite a difficult course. It requires a road bike with low/ easy gear ratios.
Road condition: For the most part this route is on paved roads.
Route Description: This excursion is especially designed to combine an ascent into the Machairas forest with a descent into Lemesos, travelling through the Pitsylia area or further up to Troodos, or even returning to Lefkosia via an alternative route.

The Avakas Gorge Trail is located in the homonymous gorge, within Pegeia state forest with the end of the trail located inside the gorge. It follows the course of the Avgas River, from where the gorge gets its name and resulted from constant erosive activity on the erodible, sloping limestone rocks composed of loams, chalks, reef and grain limestone and bentonitic clays. The gorge is also a Natura 2000 area. The trail firstly follows a dirt road (closed to private vehicles) through an open valley, then takes you into the gorge. In its last section, the trail is in the stream, in which water usually flows throughout the year. The route through the gorge is characterised by thick vegetation and a particularly attractive, shady and moist environment.

From the starting point in Troodos Square, the trail passes through a dense forest and then runs alongside the Cold River (Krios Potamos), which has running water all year round. It then passes by the Caledonian Waterfall and finishes at the Psilo Dentro in Pano Platres. The trail is located within the Troodos National Forest Park. The E4 length of the route begins at starting point (a) and runs until the Caledonian Waterfall. In Troodos Square you will find the Environmental Information Centre for the Troodos National Forest Park. 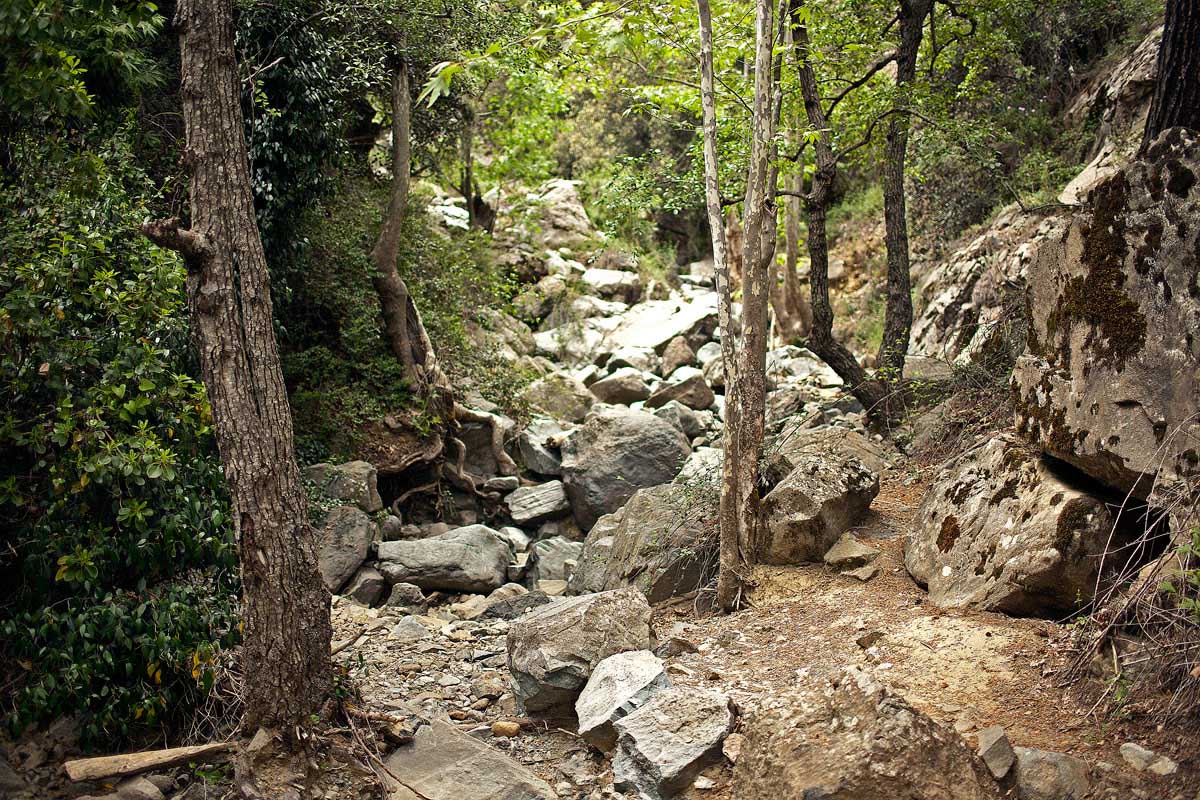 The trail begins at the source of the Karkotis River and crosses through the river’s beautiful valley, passing near the closed chrome mine and ending in Kakopetria. On the way, you can visit the Agios Nikolaos tis Stegis church (12th century) that boasts exquisite frescoes; it is also a UNESCO World Heritage site. From the church, if you follow the Pedoulas – Kakopetria road for about three kilometres, you will end up in Kakopetria. The trail is located within the Troodos National Forest Park. 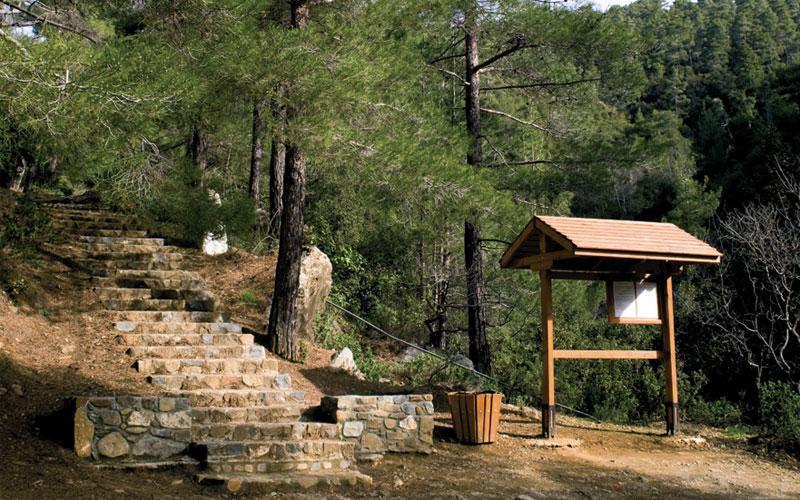 The trail is located at Cape Gkreko within the boundaries of the National Forest Park, which is a Natura 2000 area. The trail first passes through a pine tree landscape and then through low, shrubby vegetation. All along the trail, there are many points of exceptional view, the most impressive of which is at the hilltop, from where you can enjoy an unobstructed nature view on all the points of the horizon: to the east you can see the tip of the cape (Pidalion) where the lighthouse and the facilities of a French radio station (SOMERA) are located: to the west there is the tourist resort of Agia Napa; to the north the main part of the National Forest Park, and to the south the pristine waters and rugged coastline. The impressive cliffs on the south side of the hill are ideal for rock climbing enthusiasts. The Kavos Trail connects to the Sea Caves – Agioi Anargyroi Trail.

By In Cyprus
Previous articleHomeless man found living outside Limassol cemetery
Next articleEleftheria Square to open by the end of 2018, municipality says (timeline)

“Rewind – We Love retro!” Party at Patio on March 1